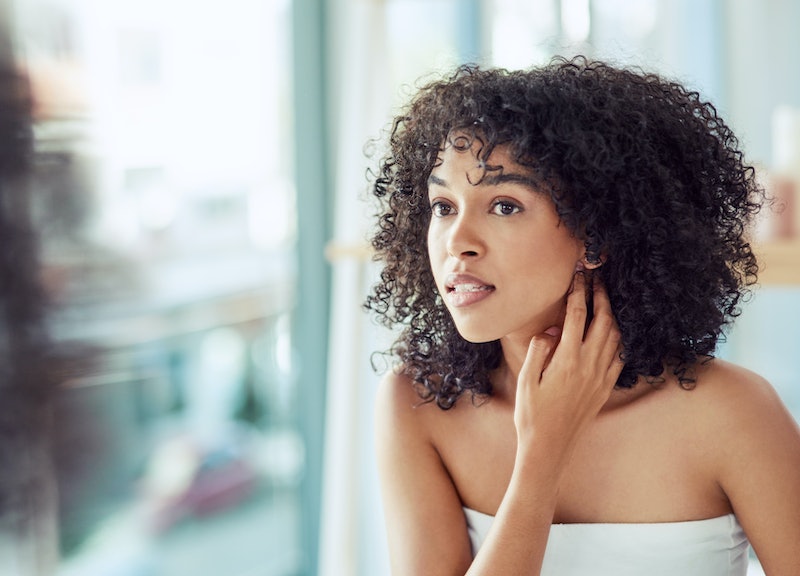 A few weeks ago, I woke up to a panicked text message from my friend. "I have a yeast infection on my face," she said. Of course, I dug for more context. She explained that impulsively, she decided to leave a sheet-mask on overnight, in hopes that its hydrating properties would be optimized after eight hours of sleep. (Don't do this.) Instead of a radiant glow, however, she woke up to her face covered in small acne-like bumps. After trying an array of traditional acne methods to no avail, she realized that what she had wasn't typical acne or a rash. It was fungal acne on her face.

While cases like hers may sound out of the ordinary, they aren't rare. And if it seems like your acne is unrelenting and nothing you're trying works, the reason might be deeply rooted.

"The differences between fungal and traditional acne are mostly in cause," Dr. Paul Jarrod Frank, MD, cosmetic dermatologist and founder of PFRANKMD says. "They can appear very similar, but fungal acne is more itchy or irritating in sensation."

And unlike traditional acne, fungal acne grows on hair rather than the skin. "The main cause of fungal acne is an overgrowth of yeast in the hair follicles," Rachel Roff, skincare expert and founder of Urban Skin RX says. "It is also known as pityrosporum folliculitis. This yeast is found in everyone’s skin, however, fungal acne occurs when there is too much of this yeast. Traditional acne is caused more by oil production, bacteria and hormones and tends to be on the sorer side. Fungal acne tends to be more itchy."

Fungal Acne: How To Identify It

"Fungal acne can look like regular acne, but there are key differences," Sue Y. Nabi, founder of vegan skincare line Orveda says. "Acne breakouts vary in size and tend to feature blackheads or whiteheads on the face, while fungal acne will usually appear as red bumps or pustules of the same size, but they will be visible mainly on the chest, upper arms, and back — rarely the face. Pityrosporum folliculitis normally lives in all hairy areas including the scalp, where it is the main cause of dandruff, and this happens when this fungus becomes predominant among your skin microbiome."

And if your regular acne treatments aren't working, that may be a sign that it's more than just topical. "Be suspicious if acne doesn't respond to traditional therapies that focus on bacteria and hormone imbalances," Frank says. And Roff insists that rarely does fungal acne appear as individual bumps. "It appears more in clusters," she says.

"If you do something that wipes out the healthy bacteria, like using harsh anti-bacterial washes, occlusive oily skincare or just taking antibiotics, there won’t be anything to keep the fungus in check," Nabi says. "As a result, fungus can over develop, which will lead to skin irritation, inflammation, and fungal acne. On top of antibiotics, anything that will create an occlusive moist zone — think tight, non-breathable clothes like workout clothes or tight clothes that are not washed regularly — will help fungal acne to appear. Genetics also play a role and a weak immune system condition is also usually associated with fungal acne."

How To Treat Fungal Acne On Your Face

While shampoo isn't generally suggested for the body and face, it's proven one of the most effective treatments. "It's been noted that dandruff shampoo actually helps because it kills the pityrosporum fungal type," Frank says. And Roff agrees. "It is recommended to wash the area and leave the shampoo on the skin for two to three minutes and then rinse. This is especially great to do after a workout." But shampoo isn't the only successful remedies. "It's best to use products with sulfur since this ingredient is antibacterial," Roff says. "Salicylic acid is another good option for acne. If a body wash or any other products with these ingredients don’t work after a few weeks, then it might be time to see a dermatologist so they can prescribe an oral medication."

But as the summer heats up, it's important to consider your clothing. "Try not to wear restrictive clothing, and keep your skin dry after working out and throughout the day," Roff says. However, trying to treat fungal acne with traditional treatments may actually make it worse. "Common acne treatments, especially antibiotics, won’t help at all and might even make your fungal acne worse because they will kill the protective healthy microbiome," Nabi says. "To keep the results and the skin in optimal condition, it is also recommended to use gentle and microbiome balancing skincare that has the power to boost beneficial bacteria and that does not create an unbalance in skin microbiome."