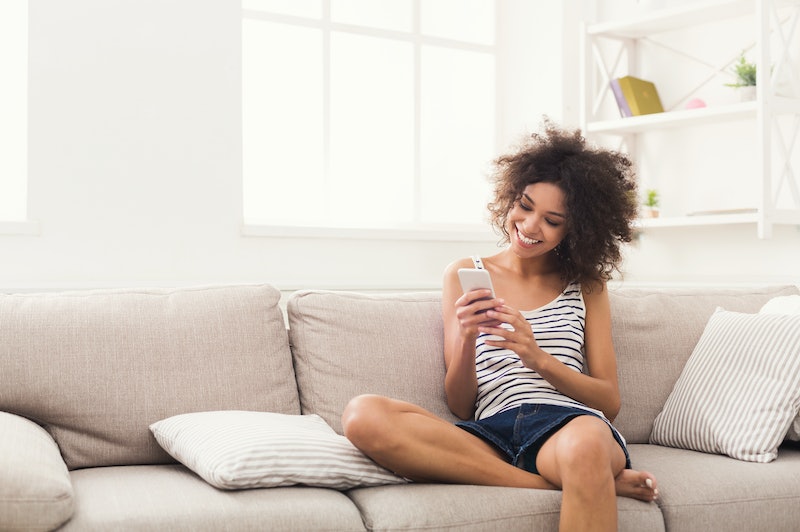 If you already have a significant other with whom you live, social distancing can present its own unique set of challenges, but a lack of intimacy probably isn't one of them. However, when you're trying to figure out how to date while social distancing, the biggest hurdle you'll have to get over is not having that in-person time to get to know each other. But thankfully, that doesn't mean it's impossible: It just might take a shift in perspective, a little creativity, and a willingness to open up, according to relationship experts.

In the age of digital dating, there's nothing new about using apps and other tech devices to stay in contact with someone you're getting to know, but the uniqueness presented by the current state of affairs means that — at least for a while — you'll only be able to communicate this way. And this not only means not being able to rely on real-life chemistry the way you ordinarily would, but also a lack of physical affection that some people really crave. And while that might be enough for some people decide to take this time to self-reflect, focus on work or creative endeavors, and put relationships on the back burner, others are up for the challenge.

Does the latter describe your current state of mind? If so, there's good news. Relationship experts like Rachel Thomasian, a licensed therapist at Playa Vista Counseling and co-author of the upcoming book Break Up & Break Out, think there are a few ways you can actually use the distance to your advantage while dating. Ahead, find her advice for getting through this tricky time, whether it be with creative first dates or using the challenge to weed out those who may ultimately be unavailable.

If you've ever had experience online dating, this beginning phase won't be totally foreign to you. If you've never dabbled, try leaning into the advancements of technology at this moment — dating doesn't have to be totally blind with the advent of smart phones, social media, and other apps that allow you to digitally connect. "It's not a terrible idea to get to know someone, or a few people by phone or video conversations before meeting them," says Thomasian. "Now is the time to tap into the digital tools available to us."

One specific app that's adapted to this social shift is Plenty of Fish, which recently unveiled a live streaming that's currently available in major U.S. cities and aims to be global by the end of April. This is the perfect opportunity to get in a little face time before you're able to meet in person.

...But Also Get Old Fashion With It

There's something actually sort of old fashion and romantic about courting, and Thomasian believes that has a lot to do with the fact that this situation forces you to slow things down. "When we slow things down and take our time to get to know people before progressing to the next levels of relationships, we have a better chance of a successful relationship," she explains.

So why not run with that idea and embrace the charm with dates and communication that's creative both off an online? "I strongly believe people are going to utilize the wonders of phone and video communication, I'm not worried about that part," says Thomasian. "[However] I do think we might start to see some more old-fashioned expressions of affections, such as sending cards or goods in the mail, or even some hand written letters."

A silver lining to the challenge of dating at a distance? Noticing certain red flags right away — particularly whether or not he or she can be stable during difficult situations. "A big benefit is being able to learn how this person handles unique challenges such as crisis, boredom, adapting to change, being able to support you when you're having difficulty with your emotions," Thomasian says. "This will tell you a lot about a person that you otherwise might not know but really want to know if you're going to spend a large part of your life with them."