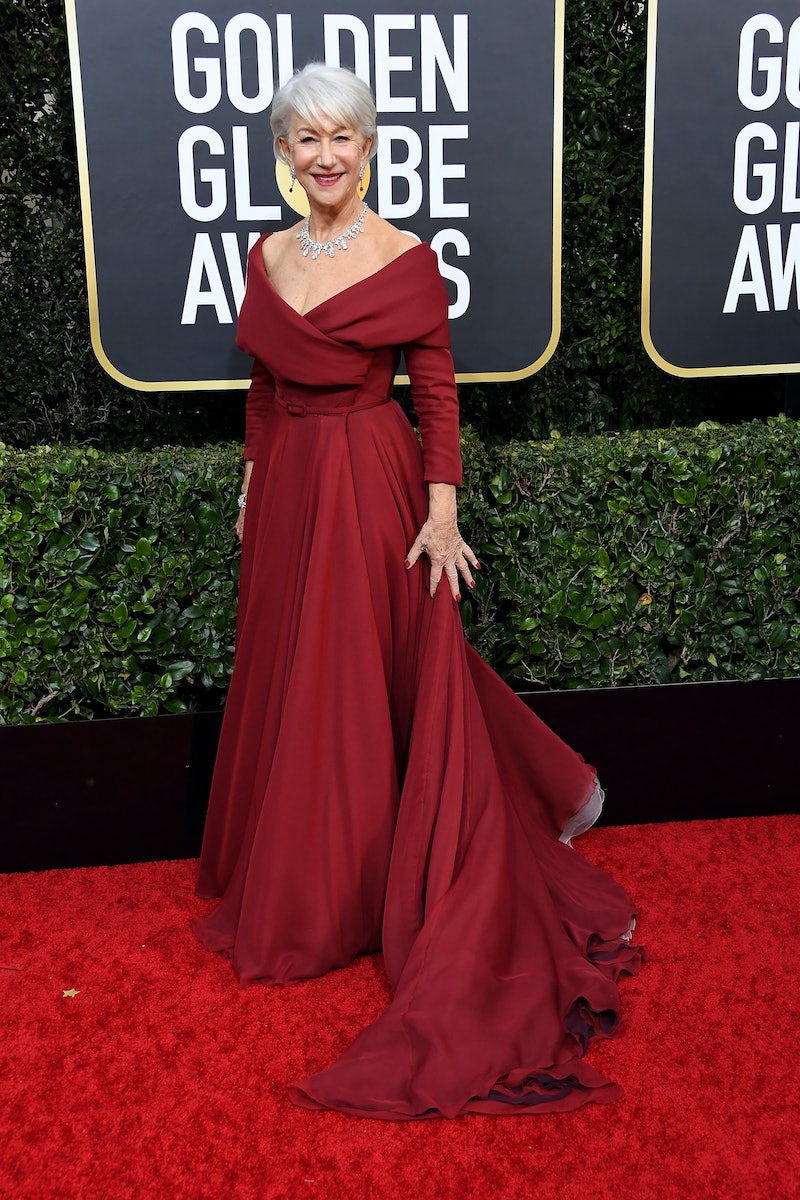 It's no surprise that Helen Mirren appeared on the Golden Globes red carpet looking entirely regal. Mirren is nominated this year in the Best Actress category for her turn as Catherine The Great in HBO's eponymous series. But this year, the star chose unexpected footwear: Mirren's shoes at the 2020 Golden Globe Awards are from Aldo, and are currently on sale for a cool $55.

Mirren opted for a pair of red platform boots from the Canadian brand, a decidedly more comfortable choice than a spindly stiletto usually worn on the red carpet. "I feel very queenly," Mirren told ET, adding that it was the first time she'd ever had a Dior dress made for her. Mirren's off-the-shoulder red gown, a Dior Haute Couture piece with a thin waist belt and an inner lining with complementary white and maroon layering, was both elegant and regal. Red was a prevailing color trend throughout the night with other major stars including Olivia Coleman and Scarlett Johansson, who both chose gowns in similar tones.

In contrast to Mirren's affordable footwear, the actor also wore 120 carats worth of diamond jewelry from Harry Winston valued at over four million dollars. Her diamond drop necklace, diamond and ruby cluster earrings, and diamond bracelet all sparkled against the deep red hue of her gown.

Because of Mirren's sweeping gown, it might be tricky to notice her boots at all, if not for a few expert gown-sweeping moves she made as she posed in front of the step-and-repeat. But, her comfortable red boots are a sensible choice for a night that requires walking, especially when a long train might pose a slipping hazard.

Mirren isn't the only celebrity to wear Aldo on the red carpet. At this year's Golden Globes, Booksmart's Kaitlyn Dever also chose shoes from the brand, and last year, Lupita Nyong'o styled a pair of silver sandals from the brand with a Calvin Klein gown. Though a custom gown or a 73-carat diamond necklace may not be on your shopping list, below pick up Mirren's shoes (on sale!) for yourself.