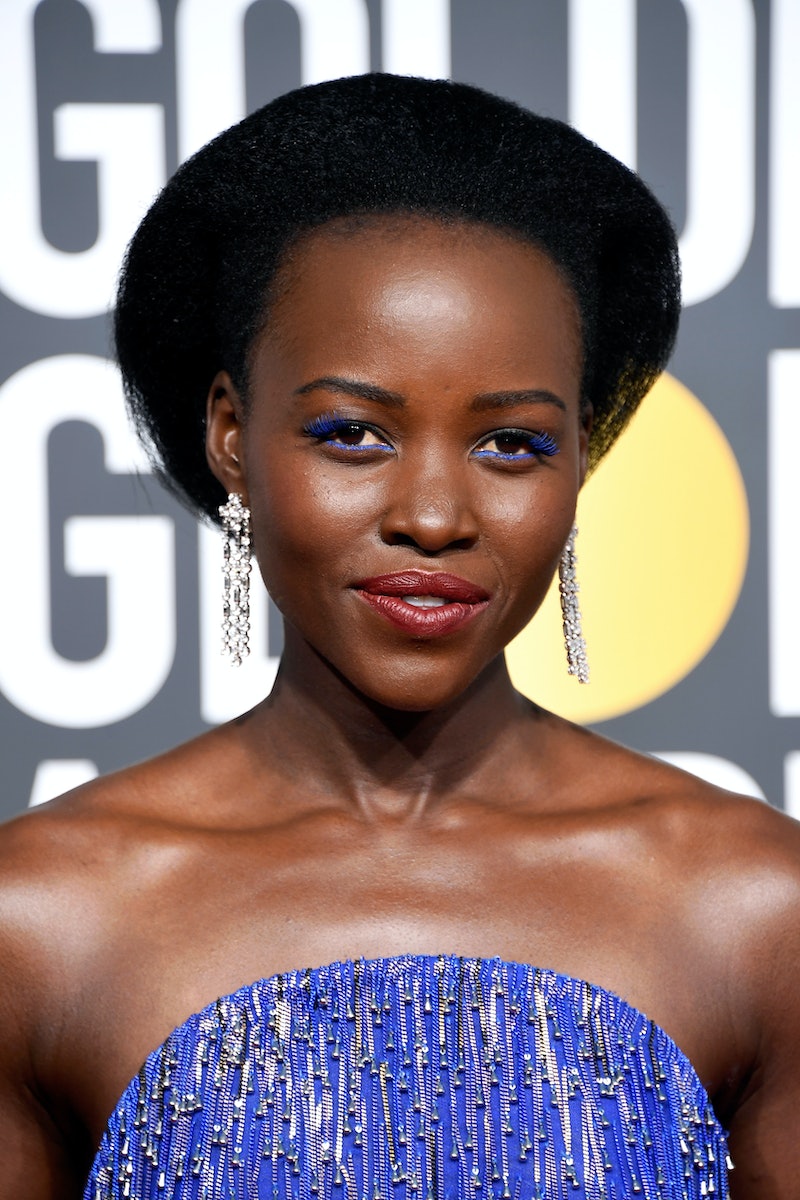 It's obviously fun to see all the shoes at awards shows, but unfortunately for all the footwear-obsessed shoppers out there, they're not always the most affordable options. Which is why when celebs wear a pair that are worthy of their custom-made gowns at a price that's not well into the thousands, fashion lovers everywhere jump on them fast. Fortunately for everyone who's been keeping an eye out for a budget-friendly option on the red carpet, Lupita Nyong'o's Golden Globes shoes are actually under $100, ringing in at only $45 (!!!) at ALDO right now — and they're actually still in stock. For now, at least.

Nyong'o has blessed the world with affordable heels on the red carpet before, so she's no stranger to mixing high and low in her looks. As recently as Dec. 5, she paired a pair of $89 Nine West heels with a Jean Paul Gaultier Spring 2018 Haute Couture collection suit — and once again, she proves that she's a master of finding just the right pieces to pull off a designer label with a budget-friendly brand flawlessly.

This time around, Nyong'o opted for a sparkly blue Calvin Klein gown, pairing it with a matching blue ring, stunning chandelier earrings, and the silver $45 ALDO shoes to match, making for a show-stopping look that stood out even on the high-shine red carpet.

Nyong'o walked the red carpet with other members of the Black Panther cast, including co-stars Danai Gurira and Michael B. Jordan. Gurira donned a gown equally as stunning, showing up in a gorgeous red Rodarte gown that provided the perfect contrast of color against Nyong'o's blue dress, while Jordan and director Ryan Coogler, who joined the group, looked dapper in classic looks.

The film has three nominations for the evening, a major one being Best Motion Picture - Drama, along with Best Original Score by Ludwig Göransson and Best Original Song for “All the Stars” by Kendrick Lamar and SZA. But whether or not the film takes home these awards, the cast's looks for the night may just take the cake as some of the best outfits of the evening themselves.

Nyong'o's overall outfit was kind of a surprising choice — after all, she's known for her often-flowing, princess-like gowns (who could forget that iconic baby blue Oscars dress?) — making this shape-skimming option quite a bit different than her usual red carpet looks. However, the star has never been one to shy away from bright shades, making this dress a refreshing new take that still manages to feel like a classic Nyong'o choice.

Though her jaw-dropping gown isn't the most attainable piece for those watching (and shopping) at home, her choice of shoes are an easy add-to-cart to help you get one step closer to achieving her always-beautiful style. But given that her outfits always spark endless re-gramming and inspire tons of looks, these $45 shoes won't be in stock for long. Keep scrolling to shop them before they inevitably sell out.