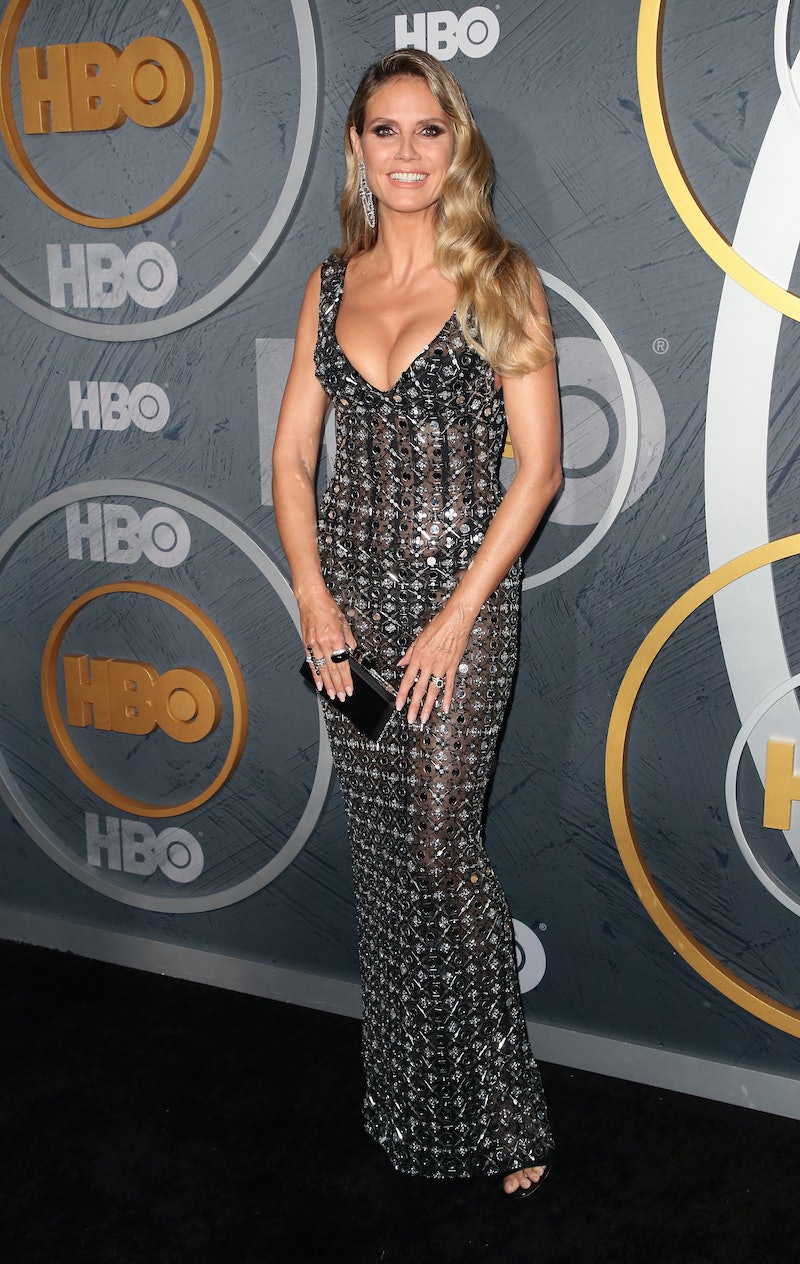 Just when you thought you had seen all of the looks that the 2019 Primetime Emmy Awards had to offer, more and more looks from both the show itself and then, later, at the after parties have continued to flood in. And similar to the main event, the post-ceremony gatherings provide for another opportunity to see your favorite runway looks be reimagined for the red carpet. Case in point: Heidi Klum's Emmys after-party dress, which looked almost unrecognizable from its original runway debut.

For HBO's after-party the supermodel and TV host donned a floor-grazing, sleek dress from Lebanese-American fashion designer, Rami Kadi. Known for creating high-impact couture elements that often bring the sparkle and shine in carefully crafted silhouettes, Kadi's design worn by Klum was a prime example. And while the model's take exuded the brand's shimmering intricacies, the eye-catching dress did look very different from when it was shown as part of the designer's Spring/Summer 2019 collection.

On the runway, the glistening black gown was styled with an oversized, lurex and velvet one-sleeve jacket and a beaded cut-out headpiece. But, for the star-studded soirée, Klum pared the look back by just wearing dress by itself — allowing the ornate, laser-cut mirrors and glass bead detailing to really have its moment. Forgoing the runways matching headpiece and any of the other aforementioned accessories, Klum kept it simple with a sleek black clutch and made a more subtle statement with a pair of chandelier drop earrings that complimented the dress nicely.

Similarly, when it came to beauty, Klum went for a softer approach. Instead of pulling her hair back, the newlywed opted for tousled waves swept to one side, which ultimately gave the look an Old Hollywood feel. Klum's glamorous yet understated hair was complimented with a simple, radiant makeup look that left her fresh-faced and glowing.

Though Klum's after-party ensemble didn't include some of the more high-fashion elements seen on the runway, it was still just as head-turning. On top of that, this dress transformation also proves that even a show-stopping gown like Klum's can be given a whole new feel with just a few accessory switches. Be sure to keep this premise in mind before you pass over a piece that you already have hanging in the closet.