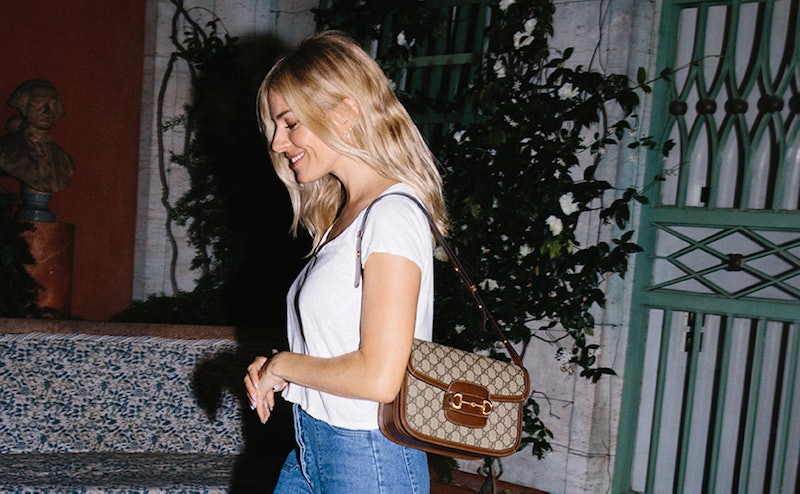 What is it that defines an It-bag? It's something that's eye-catching but not overtly flashy — a true cult favorite can actually be quite easy to spot, if you know what to look for. Gucci's new Horsebit 1955 bag is the next It-bag and already has the star-studded following to match. The house released an exclusive single style launch early last month — a logo-printed shoulder bag that's equal parts classic and trend-forward.

Since Creative Director Alessandro Michele took the reigns at Gucci, the brand has amassed a long list of influencer and celeb fans (Jared Leto, Lou Doillon, and A$AP Rocky sat front row at the brand's recent show in Milan), so it's not all that surprising that A-listers including Elle Fanning, Sienna Miller, and Alexa Chung have already been spotted wearing Gucci's latest must-have item. And they aren't the only ones with their eyes on this new highly coveted bag, because it is now completely sold out on Gucci's website.

That said, if you weren't able to get your hands on one for yourself, now is the chance to pre-order the classic 'GG' design on the brand's site for $2,300. If you're interested in other shapes, the brand will launch two different silhouettes (with all the same signature accents, don't worry).

As far as the different bag selections are concerned, Michele took the full range of Gucci consumers into consideration. The designer offers up three different, yet equally functional silhouettes — the shoulder bag, the messenger bag, and the bucket bag. Each contains Gucci's brand signifier: the horsebit, an archival detail from the '50s that's being used on handbags for the first time since Michele was appointed in 2015.

The aptly named Horsebit 1955 bag first made its debut on Gucci's Resort 2020 runway, and has expanded into an array of shape, color, and fabric combinations, making it especially easy to style. British model and Gurls Talk founder, Adwoa Aboah, paired the new shoulder bag with a billowy pink dress during London Fashion Week. This serves as a stark contrast to Sienna Miller's take, which was less formal in jeans and a t-shirt as she strolled around Rome last month. Alexa Chung was also spotted wearing hers with a well-tailored jacket, dark-wash denim, and patent-leather Mary Jane pumps to complete a more refined outfit.

Needless to say, this new addition to the Italian brand's collection of timeless accessories is highly Instagram-able with all the makings to become a wardrobe classic — meaning it's trendy, but not so much that it will lose it's appeal a few months or years down the line. It's distinctly Gucci, meaning that it's iconic, bold, but also a design that will feel just as relevant tomorrow as it does today. All of which makes it that much more worthy of the hearty investment.

Having a hard time resisting the staying power of such a piece? Keep a close eye on the brand's website for availability in the weeks to come.