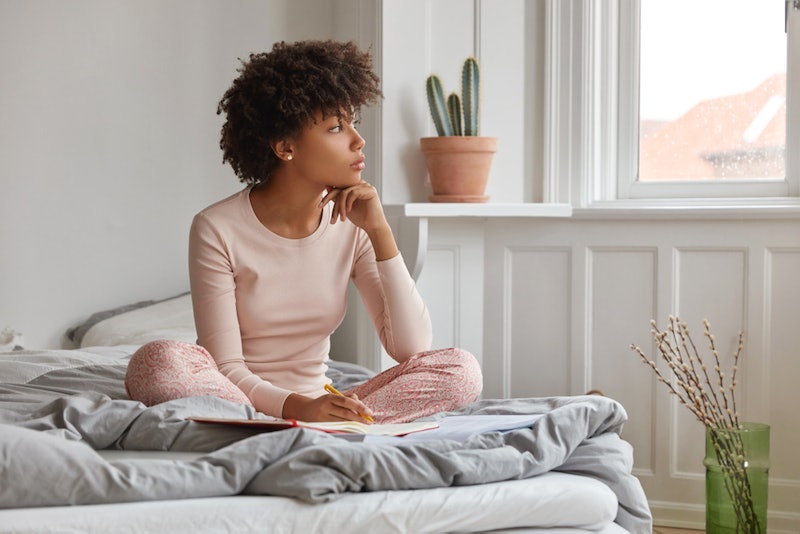 Dating these days can be complicated. Between the ghosting culture and sea of dating apps to wade through, one can sometimes start to lose focus of what they actually want from a relationship and, more importantly, what they need. Sometimes the best thing one can do is press the pause button — even if it means going celibate for a bit. While it may sound dramatic (and is obviously not for everyone), removing the physical component from dating is actually more common than you think and can be quite therapeutic and centering for some.

This was the case for Nicole Centeno. After going through a difficult divorce, the author and founder of Splendid Spoon found herself a bit overwhelmed and lost in the dating game. The mother of two decided to pump the breaks in an effort to discover what she really wanted in a partner. Here's her story.

I had been married for about three years and with the same person for a total of 13 years — we broke up in late 2015. Breakups are so complicated and mine was no exception. I had been with this person for over a decade, had two kids together, and shared a very strong bond. But, I was also feeling like I didn’t have the partnership that I needed and I was trying to understand what my self-worth was.

After the divorce, I started to date a lot. I was feeling pretty down and had this sort of existential moment of thinking: Who am I? What are the attributes that I have that I’m really proud of? How do I want to build on those? Am I an attractive person that people want to spend time with, date, and get to know in a romantic way? I hadn’t explored any of those questions in 13 years. So I found myself seeking self-worth through dating a variety of people, and I adopted this sort of free-spirited, youthful mentality that felt like a resurgence of my 20s.

After some time (about a year or so), however, I started to feel a bit imbalanced. In fact, there was a specific moment that was a tipping point for me. It involved a man I met at a two-day personal development retreat. In our initial interactions it was clear we had an instant connection and chemistry. Here was the issue: He had just gotten out of a relationship and was still sort of in the throes of a breakup. After the retreat, we continued to see each other a handful of times over the course of a week or so, but he eventually revealed it was all moving too quickly and that he wasn’t ready to jump into something serious.

I was heartbroken. But, as disappointed as I was, the experience made me realize how fragile my heart really is, how real my emotions are, and how sensitive of a human being I am. It gave me a deeper appreciation for myself and made me want to take better care of myself. And doing that, for me, meant taking things slower and taking my time with relationships going forward.

So, I made the decision to take things really slow. I knew the way I was dating over the past year was starting to make me feel judgmental toward myself — and I wanted to turn that judgement into something productive. I decided to not say "yes" to every person who asked me out and not look to fill my calendar with dates all the time. To be clear, I didn’t necessarily make this hard and fast decision to not date at all or sleep with anyone — and there was no timeline. I just knew I wanted to move at a slower pace and do what felt comfortable and safe for me.

It became very clear to me fairly quickly that slowing down and dedicating more time to myself was really nourishing — there was a therapy to it. I started to feel the aforementioned judgement slip away, and I wanted to keep feeding that. That’s not to say I didn’t have periods of frustration in which I wanted to go out and be sexual. In those moments, I stopped and had a dialogue with myself in which I would say, “Well, you can definitely go out and do that if that’s what you want, but it seems like you’re feeling pretty grounded taking things a little slower.” Every time I had that conversation with myself it ended with me agreeing to continue on the current path I was on, because it was working for me.

Another thing to note is that I was still dating and meeting new people during this time. In fact, it was during this period that I began using dating apps, not because I wanted to find a partner right away, but because I was determined to understand my relationship patterns (and maybe break some of them). I had this history of dating for physical chemistry only and I wanted to see what it would be like to remove this from the equation. I wanted to use the apps to help me find people that didn’t fit my previous mold of physical attraction. This new way of dating allowed for a freedom I hadn’t experienced before. It allowed me to be grounded as I got to know someone, and that felt really good.

This approach also helped me rethink how I wanted to evaluate a partner. For instance, I was very intentional about not having an alcoholic drink on a first date, which actually made a lot of people with whom I was chatting on dating apps drop off and lose interest. (You really learn so much by stating what your boundaries are right off the bat!) I also dated a few women during this period, which was really important to me. I’ve always dated men, but there’s a part of me that’s also attracted to female energy, so why would I not try that? Why would I not honor that part of myself? It was like that first year after my breakup was one of impulsive dating behavior and the following year was one of more thoughtful experimentation.

The celibacy lasted a total of 11 months. The first person I chose to sleep with was a woman . I was seeing, which — for me — felt like a gentler way to explore the sexual part of myself again. And while this relationship did not amount to anything long-term or serious, I think we navigated that situation in a respectful and thoughtful way. It also showed me I was ready to move on from this phase that served me so well over the past year. I had listened to myself and trusted myself enough to move forward into a new phase of dating and relationships.

All in all, that "slow year" of celibacy really gave me a deeper self-awareness of where I'm tender and vulnerable and what I need to feel safe. By the time I entered into my most recent relationship (which was actually with a man I dated briefly during my celibacy), I knew that that sense of safety requires acceptance and patience from my partner. But, you have to first have that with yourself.