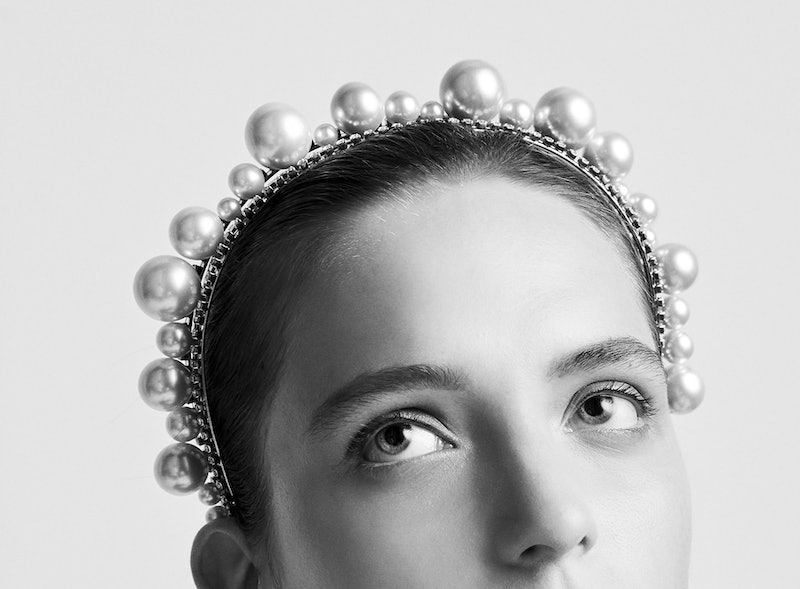 The resurgence of the headband has certainly made its mark over the last year or so, with no sign of slowing down anytime soon. Givenchy's Ariana headband is proving that the trend is here to stay while also taking the accessory to the highest-level of fashion — haute couture. And now the embellished tiara that'll give any look the high-fashion touch can be added to your personal collection of ornate accessories. Yes, that's right, the headband that's been making waves among the fashion crowd ever since its runway debut is now available for purchase in select Givenchy stores and online.

First spotted during creative director, Clare Waight Keller's, Fall-Winter Haute Couture collection, the embellished headband was appropriately named after the design house's latest muse, Ariana Grande. In fact, you may remember seeing the songstress donning the tiara earlier this year in a series of visuals that revealed she would be the new face of Givenchy and thus launching the #Arivenchy campaign.

Given that Grande is a bonafide pop princess it seems only fitting that this show-stopping tiara would bear her name. Like jewelry for your hair (something else Grande is widely known for — cue the swinging ponytail), the headband puts a modern spin on a hair accessory that holds a lot of history. It has a shiny silver metal band that features the luster of three sizes of white resin pearls that sit among two rows of glistening white Swarovski crystals — to say it's a head-turner would be an understatement.

Ringing in at $690, the designer headband is one of those pieces that you'll want to display on your vanity instead of tucking it away in a drawer. And while this statement-maker will give evening-wear and cocktail attire the royal treatment, you can also match it up with your less regal outfits, too. For fall, consider wearing it with an ivory hued chunky knit, light-wash denim, and a jewel-tone kitten-heel mule. Or, use the headpiece to bring the final sartorial touch to a billowing dress and on-trend combat boot pairing.

Continue on to see and shop this exquisite headband from Givenchy —it's guaranteed to push back your strands with a dose of sparkle and shine this season.