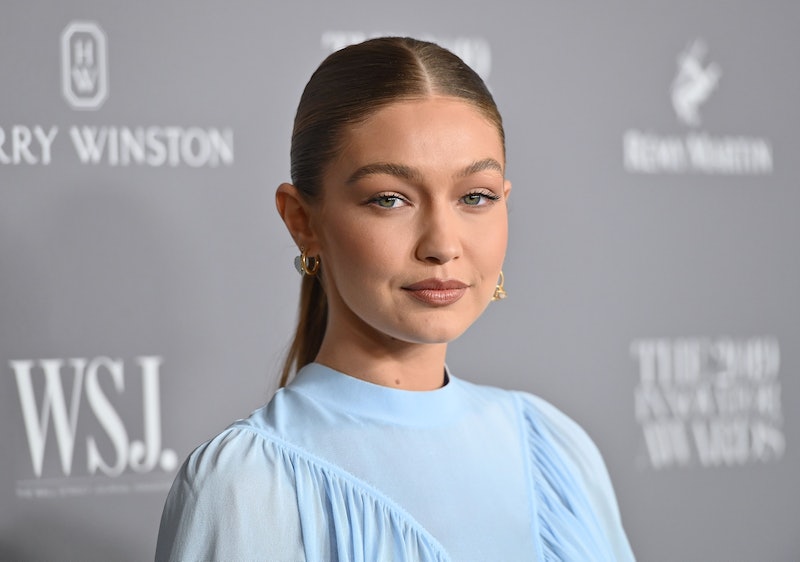 What are eyelids anyway if not tiny canvases wiped clean at the end of each day? Eye makeup is becoming progressively more of an artistic feat, with all the radical colors, geometric shapes, and polarizing concepts that are debuting on today's runways — from bleached brows to mascara tears, both of which have made Fashion Week appearances of late. The newest in this campy trend is Gigi Hadid's white eyeliner at the Harper's Bazaar Exhibition on Weds.

The magazine kicked off Paris Fashion Week with an exhibition at the Musée des Arts Décoratifs and the model's futuristic lids were the work of an artiste, indeed. (Patrick Ta, namely.) The makeup extraordinaire gave Hadid the most abstract eyeliner to balance out her classic Chanel coat dress.

The ethereal number, from the Spring/Summer Couture lineup, was white and embroidered with allover flowers — a look Jackie O would have swooned over back in the day. Hadid wore it with blingy pearl-and-diamond drop earrings and a teardrop choker and the bow detailing on her heels was right on par with the retro theme.

She would have looked like a real poster child of the '60s if it weren't for her avant-garde eye makeup, which consisted of a single line drawn in stark white straight across the lid.

It was actually reminiscent of the geometric look Ta gave her in September — the yellow, remember? — when floating eyeliner was just on the cusp of becoming a thing. Now, it has sparked precisely the amount of obsession that Proenza Schouler, 3.1 Phillip Lim, Rosie Assoulin, and Anna Sui predicted it would in their 2020 shows.

Runway makeup aside, though, the free-floating liner look is crossing over into street (and social media) beauty trends ever so seamlessly. Hadid's latest rendition of the "floating crease" that Twiggy made chic in the '60s is a little more edgy in the way it challenges the natural curve of the lid. Not to mention the angelic color, which is equally in.

The next time you feel like giving your minimalistic makeup some futuristic flair in a matter of a mere seconds, these white eyeliners should do the trick.