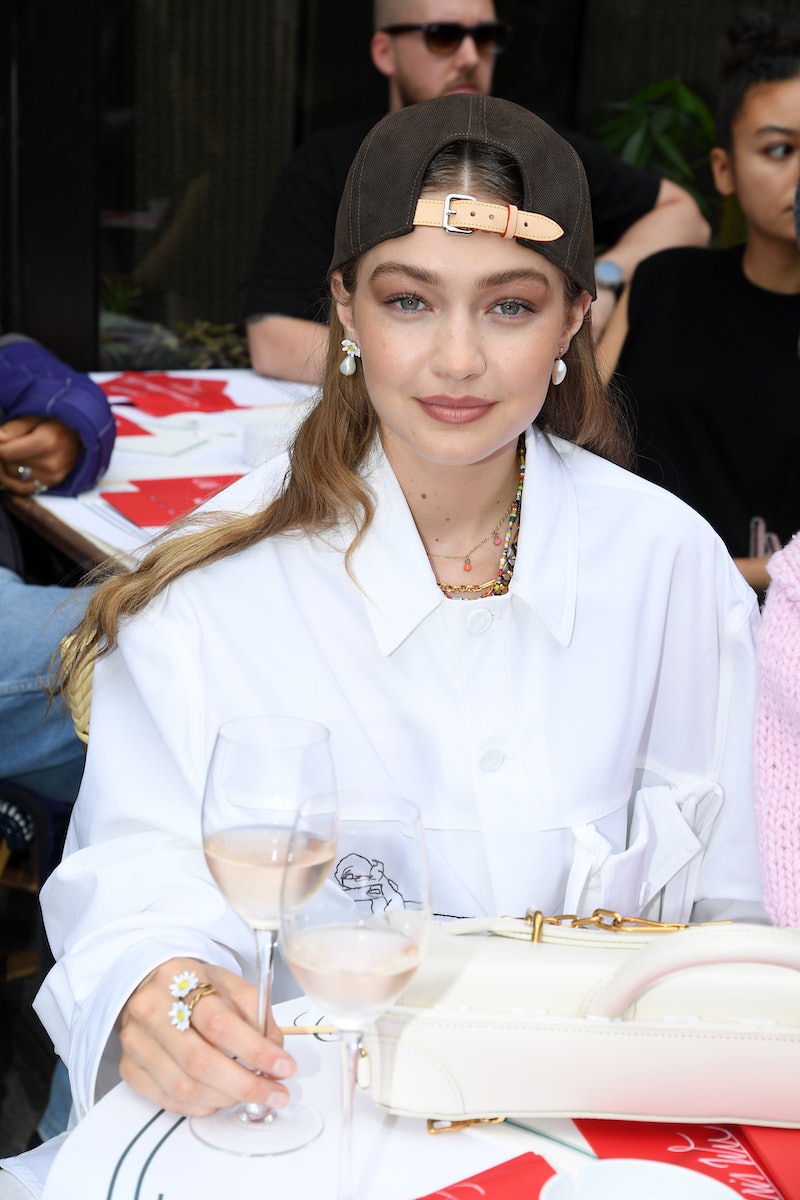 Though boiling temps are still perched high in heat wave-territory in New York City, celebrity street style is beginning to show the first signs of fall. Gigi Hadid headed to La Esquina in SoHo on Tues. night, and parts of her off-duty look had pivoted toward the season ahead. While still hanging onto summer with a ruffly white tank top, the supermodel opted for straight-leg jeans rather than bike shorts or cut-offs, and Gigi Hadid's square-toed mules were a visible shift from her go-to low-top sneakers.

Tackling one particularly intimidating footwear trend head-on, the 24-year-old made a case for the square-toed silhouette, a current favorite that's gaining traction among the fashion set. With the metallic closed-toed slides lending a pop of gold to her low-key dinner look, Hadid was signaling a new take on mules in 2019. After the open-toed, block-heeled version of the moveable slides dominated the past few years, could tastemakers be ready to ditch height altogether and lean into the grandpa-approved slipper?

The comfortable slide was a surprising pick for the Reebok ambassador, but in true Gigi fashion, the California-native managed to make the questionable footwear choice appear chic and wearable. Topped off with a pale green micro-bag and loose waves, the model made her way to a meetup with The Bachelor's Tyler Cameron and international tennis champion, Serena Williams (casual).

The revival of nostalgic staples like flip-flops and barely-there sandals has been a blast, but fashion girls everywhere are simultaneously rejoicing as they unearth their favorite thigh-high boots and classic loafers for fall. All things must come to an end, but that's not necessarily a bad thing when you have a well-sourced replacement to take its place.

Not quite convinced on the surprisingly modest footwear pick? Allow The Zoe Report to assure you that the model-approved staple deserves a slot in your autumnal style lineup. Ahead, a variety of flat mules that will make you forget your heels altogether.

A laid-back take on the classic loafer, these metallic slippers are a savior for top-notch transitional style.

An airy update to an undefeated classic, these embossed leather mules are best paired with straight-leg jeans and a dainty anklet.

The Row is all about understated craftsmanship, and these slippers' bright white hue will lend a hint of mod to your vibe.

After Birkenstock sandals made a comeback this summer, could the clog counterpart be on-the-rise? Time will tell, but it's not a bad idea to have this studded option from Isabel Marant at the ready.

Not ready to ditch heels? Try out this square-toed option from COS.