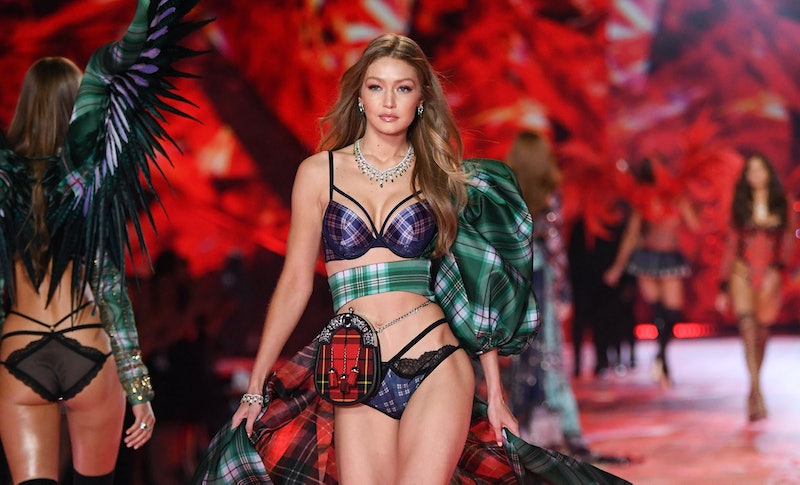 On Thurs. evening, everyone's favorite wing-clad models made their way down the 2018 Victoria's Secret Fashion Show runway. And although you'll need to wait until Dec. 2 to watch the show in full, The Zoe Report went ahead and rounded up the very best looks for the ultimate sneak peek. Prepare to shell out some serious cash on lingerie — this year's show is that good.

Following the 2017 show in Shanghai, the lingerie powerhouse set up shop in New York City on Nov. 8. Although a handful of Angels were reportedly unable to attain visas for last year's show (including Julia Belyakova, Kate Grigorieva, and Irina Sharipova), the 2018 lineup is packed with crowd favorites. Both Kendall Jenner and Gigi Hadid made their official return to the runway after a brief hiatus, and Behati Prinsloo walked her first show since giving birth to her and Adam Levine's second child.

As always, the Angels showed off the year's wildest lingerie trends to a live soundtrack, and the 2018 performers were some of the best yet. This year's musical guests included Bebe Rexha, The Chainsmokers, Halsey, Kelsea Ballerini, Rita Ora, Shawn Mendes, and The Struts.

Last year, Victoria's Secret debuted its Balmain collaboration during the show, sending models down the runway in eccentric pieces adorned with studs and spikes (remember Cindy Brunda's epic boots?). The brand went the opposite direction with its 2018 collaboration, teaming up with Mary Katrantzou, instead. The London-based designer is known for her bright colors and feminine silhouettes, which were speckled throughout Thurs.' runway. But it was Gigi Hadid's floral, cut-out jumpsuit that really stole the show.

As for the lingerie, the 2018 collection proved just as inspiration-worthy as ever. You aren't alone if intimates are at the very bottom of your shopping lists (especially as holiday gifting picks up), but you may be convinced to splurge on a new set. You'll be able to shop select pieces from the collection when the show airs on Dec. 2, but there's no harm in scoping out the items you'll want when the time comes.

While Kendall Jenner's rhinestone-encrusted bodysuit likely won't make it into your shopping cart, you can still take subtle notes from the runway lineup when shopping for lingerie. If the 2018 runway means anything, you can anticipate to see a spike in neon bras and underwear (which are much easier to wear than you'd expect). There's also a chance that the fashion world's obsession with plaid suits will soon be translated into intimates — the runway was chock-full of tartan bras (and even a few capes).

Ahead, every look that made its way down the 2018 Victoria's Secret Fashion Show runway, including Bella Hadid's winter white getup and Winnie Harlow's feather-adorned bra. Spoiler: You'll even see a teary-eyed Adriana Lima take her final bow, as the Angel announced via Instagram on Thurs. evening that tonight's show will be her last.