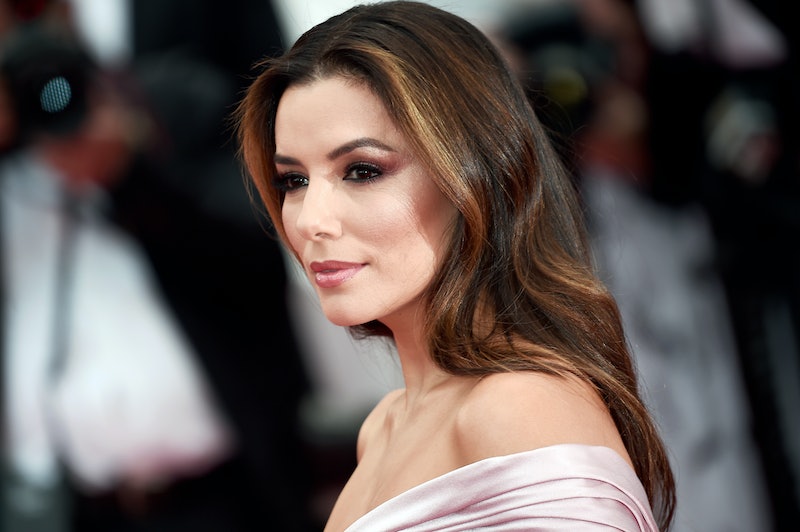 The red-carpet events just keep coming throughout the month of June — and you know what that means, right? There's definitely no shortage of covetable fashion and beauty looks for you to fawn over (and maybe even replicate for yourself). Sure, some of said outfits and makeup moments may seem difficult to work into your own day-to-day, but not Eva Longoria's neon-orange nails at the Grand Hotel premiere. Nope, those are actually quite easy to emulate and they're perhaps the easiest way to wear the traffic-stopping hue that's been taking the fashion world by storm.

June 10 was the night of premieres. On the East Coast, stars flocked to the New York City showing of movie The Dead Don't Die, where feathers were the clear red-carpet favorite among the attendees, while the Miami screening of ABC's latest family drama, Grand Hotel, which was hosted by Elite Daily, proved to be chock-full of high-octane color. Roselyn Sánchez, who plays Gigi Mendoza in the forthcoming series, showed up in a floral-print maxi that was pure summertime perfection, while Bachelorette Hannah Brown opted for a bold printed mini. Ultimately, though, it was Longoria's ultra-sleek getup that stole the show.

Longoria, who executive produces Grand Hotel (set to air Monday, June 17 at 10|9c on ABC after The Bachelorette) stunned on the red carpet in a black, one-shoulder midi dress. The sleek number features a single structured shoulder and an asymmetric, waterfall-like hemline that perfectly contrasted the streamlined top. The actor paired the frock with a metallic smoky eye, created by celebrity makeup artist Claudia Betancur and a slicked-back, low ponytail, courtesy of Laura Barcelo.

A single pair of diamond studs added the perfect touch of sparkle, while her black strappy heels put her neon-orange pedicure on full display — the latter of which is the detail you probably missed about her jaw-dropping Mon. evening look, but should take note of right away.

It's no secret that neon-anything has been trending in the celeb street-style world. Kendall Jenner's been playing favorites with bright green while Gigi Hadid has a clear affinity for a citrusy orange. Though those outfits were certainly a standout, wearing head-to-toe color isn't everyone's cup of tea — and that's why Longoria's neon-orange pedicure is so worthy of mention. It offers up an easy, understated way to work summer 2019's biggest color trend into a look.

So, go bold with your next pedicure by scooping up The Zoe Report's roundup of the best neon-orange polishes on the market. Sandal season is nearing, so there's no better time than now to add a swipe of color on your toes.

Base Coat
Nail Polish In Leo
$18

This long-lasting formula is free of the eight most toxic ingredients.

This OPI polish is a slightly more subdued take on neon orange — and it's perfect for the summertime.

This fiery orange hue is sure to make a serious statement this summer.