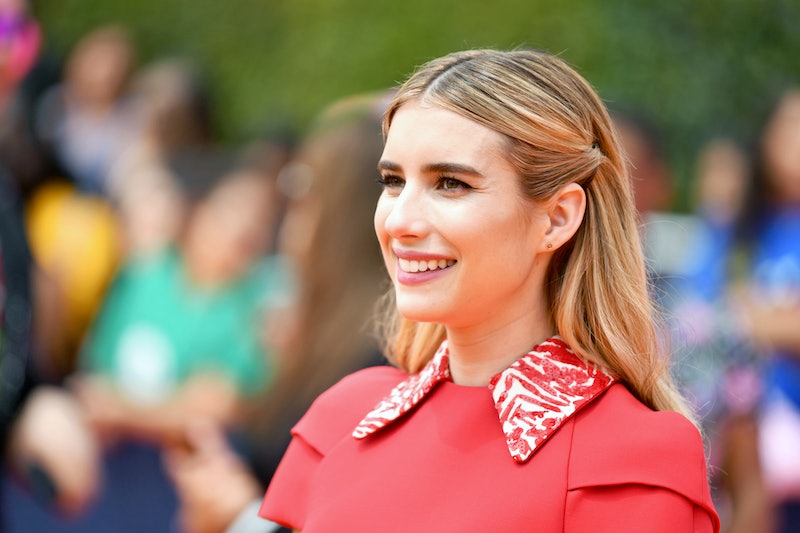 In case you need any more convincing that Emma Roberts is the unofficial summer shoe queen, then you might want to take a peek at her latest off-duty look. The actor, who never fails to dish out a major fashion lesson with each outing — whether that be how to master print mixing with ease, the styling power of a crisp white tee, or the fact that a good closet staple doesn't have to break the bank — was just spotted wearing the ultimate slip-on-and-go flats that you can actually add to your lineup, too. That's right, Roberts' red flats are still available to shop right now, though they probably won't be in stock for long.

Roberts rounded out her long holiday weekend on July 7 with a casual stroll around the Los Feliz neighborhood, which also included a stop at a coffee shop for a much-needed caffeine boost. Considering the actor's off-duty uniform remains relatively low-key, it should come as no surprise that she reached for two classic closet basics prior to heading out the door for her Sun. adventure.

For her July 7 outing, Roberts donned a pair of medium-wash, straight-leg jeans and a long sleeve, leopard-print shirt that she tucked into her denim — i.e., it was a simple, two-piece combo that was anything but boring, thanks to a handful of standout accessories that you'll want to scoop up right away.

In an effort to block out the sun's harsh rays (and perhaps stay a bit more incognito from the paparazzi), Roberts threw on oversized, square-shaped sunglasses with a bright-red frame. But the hero piece of her entire getup were her shoes of choice: crimson-colored slip-on flats from celeb-favorite brand, Reformation.

Roberts' red mules feature sweet bow detailing along the vamp, a V-shaped, pointed-toe front, and a short wooden heel for the perfect amount of height. They currently retail for $178 and boast a sustainable, eco-friendly design. Per the product description, the slides are made from leather that's been vegetable tanned — a process that replaces hazardous chromium with natural things like bark or plant tannins.

So freshen up your footwear lineup for the season by shopping Roberts' exact Reformation flats while they're still in stock, plus more of The Zoe Report's favorite slip-on-and-go summer shoes, below.

You're going to be so happy to have these pair-with-everything flats on hand this summer.

These red mules aren't only insanely cute, but they're super comfy as well, thanks to the padded insole.

These poppy Limoncello-hued mules are guaranteed to brighten up every look in seconds.

You can wear these streamlined T-strap sandals year after year.

Much like Roberts', these Calvin Klein mules have a pointed-toe front and a short heel.