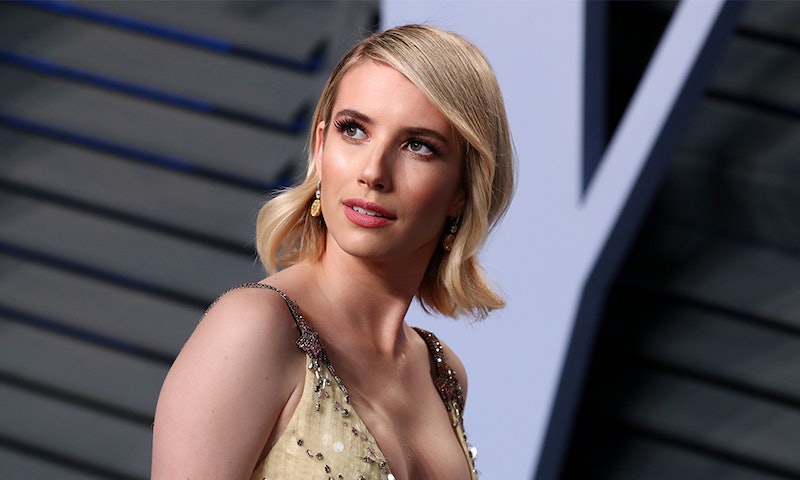 The ensemble Emma Roberts sported to a Chloé event at the Los Angeles Museum of Contemporary Art (MOCA) on Weds. isn't your average suit. Her fiery corduroy set was adorned with little black embellishments all over, much like a piece you'd expect to see hanging in your grandma's closet or perhaps something you'd wear to bed. However, Emma Roberts' orange printed suit makes it acceptable to wear patterned separates outside of your pajama set.

MOCA and fashion house Chloé cohosted the opening of two art exhibitions on Weds. evening. Guests were treated to a private tour of the Geffen Contemporary located in Downtown Los Angeles, and among those guests was an impeccably dressed Emma Roberts.

The American Horror Story actor showed her support of the designer host by sporting a bold Chloé suit set in a bright autumnal hue. The two-piece featured an Equestrian-style, single-breasted blazer with an extra-wide lapel and straight-leg pants with pleats, all corduroy and decorated with intricate black embroidery.

Roberts wore the suit with a silky white button-up undershirt and black leather, buckle-clad flats. She also carried a neutral, camel-colored handbag. The 27-year-old posted an Instagram photo of her in the outfit in front of a painting, tagging artist Laura Owens and a heart emoji.

The suit was such a perfect choice that another guest, illustrator Langley Fox, turned up in the same one, only in a different color. Suits — and menswear, in general — have been trending for a while now, but designers like Chloé have taken the trend to the next level lately by incorporating bold colors and patterns.

Blake Lively wasn't afraid to rock a print during her legendary suit parade this past summer. She sported everything from rainbow plaid to classic pinstripes to promote her film, A Simple Favor. Naomi Watts also wore a '70s-inspired floral set recently, while Ashley Graham opted for animal print for her appearance on the Today Show.

Roberts, herself, has sported a patterned two-piece before, too. She wore a jacquard blazer and matching cropped trousers to a Vogue Eyewear event back in 2012, though her most recent look is undeniably bolder.

Now that patterned suits have received the stamp of approval from Roberts, you can ease into the trend yourself. The key to sporting a repetitive print is to pair it with neutral basics (say, a white button-up like the actor's). Ahead, The Zoe Reports' favorite Roberts-inspired suit sets.

Roberts' velvet jacket offers an edgy — yet wearable — take on the suit trend.

Pair the blazer with its matching bottoms for the full Roberts-approved look.

This suit set has it all: a rich burgundy color, animal print, and contrasting pinstripes, all in one.

Go bold by pairing your animal-print blazer with these matching, cropped kick-flare pants.

This oversized, checked blazer is bubblegum pink, a throwback to the '70s.

Sport these pink checkered pants with a sleek white turtleneck for a subtle outfit or with the matching blazer to copy Roberts' look.

Opt for a more classic animal print with this super-neutral blazer instead. Pair it with a black turtleneck and white sneakers with an easy, off-duty look.

The matching pants feature a tailored silhouette with the perfect high-rise waist.

If it's the burnt-orange hue that attracted you to Roberts' suit, then opt for this super-similar (and more affordable) one from Free People.