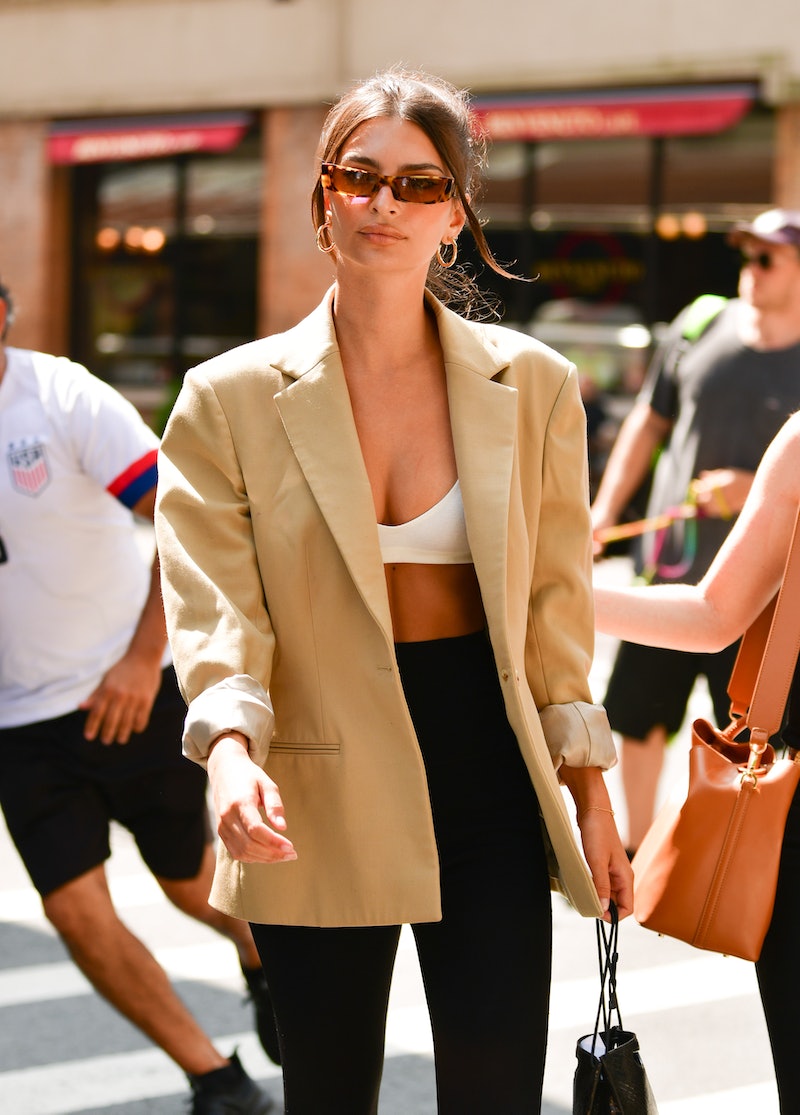 The art of dadcore can be tough to nail. Whether you're inviting a classic baseball cap or a worn-out hoodie into your ensemble, you'll want to strike just the right balance — and tie in some personal touches along the way. Emily Ratajkowski's sneakers outfit is providing the perfect lesson in both, marrying the "ugly" fashion trend with a few nods to her feminine, flirty personal style. The best part? It's all tied together by an all-new, limited edition shoe that's still in stock.

On Jul. 29, Ratajkowski stepped out on New York City wearing a few resident favorites — including a boisterous, button-down top from her very own swimwear brand, Inamorata. The shirt was featured in her recent mesh drop (which has become the biggest trend of the summer for two years over now), rendered through several different silhouettes. She repurposed the shirt for streetwear in this look, wearing it over a basic white bra. Ratajkowski also called on her Hayward shoulder bag, her white CDC-recommended face mask, and her go to cat-eyed Versace sunnies, whose tortoise shade completed the warm-toned ensemble.

From the waist-down is where the dadcore really starts — she chose a pair of baggy, low-rise utility pants in a muted olive hue, pairing them with Travis Scott's most recent collab with Nike. The silhouette is a take on Nike's famous, fashion girl-approved Air Max sneaker, entitled "Travis Scott Cactus Trails" — and it just dropped in May. The shoe has been hotly debated amongst footwear fans, but Ratajkowski's seamless rendition of them is sure to cast any doubts aside. The styling options don't stop there — she recently wore them with a pair of toasted brown trousers, a white button-up, and the same faithful sunnies, proving that the shoe can bring tons of versatility to anyone's wardrobe.

Luckily, many pieces Ratajkowski wore, including the sunglasses and the shoes (though resale price varies by size), are still in stock, some of which are already on sale. Continue ahead to try the whole look, yourself: