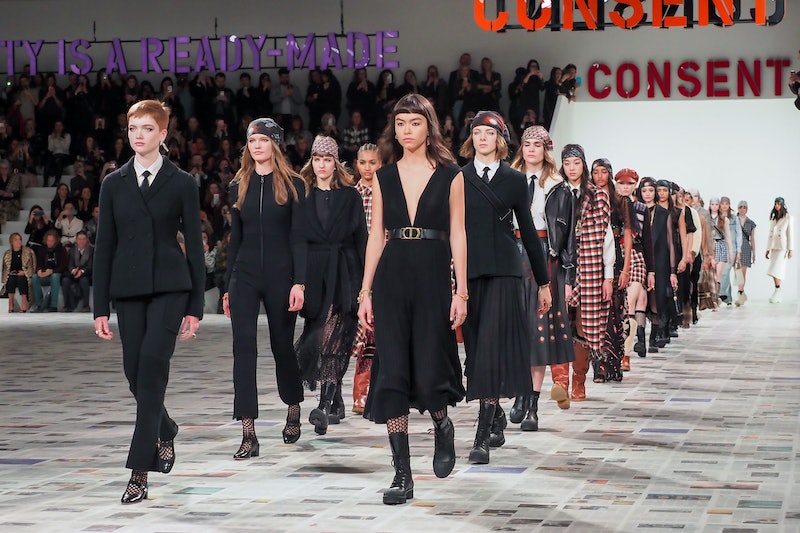 As Covid-19 continues to affect major events around the world, many are curious as to how brands will successfully transform their traditional runways. Though September 2020 fashion weeks are still under review, Dior's 2021 Cruise Runway Show will go on — but without the normal audience. The runway presentation will be held at the Piazza del Duomo in Lecce and will be live-streamed for the public on July 22. The presentation will abide by social distancing rules mandated by the Puglia region of Italy which, if all goes well, may set a new precedent for the industry as a whole.

July marks the 4-year anniversary of Chiuri's appointment as Dior's Women's Creative Director. Since then, Chiuri has gained a reputation for collections that not only present beautiful clothes, but come packaged with a larger social message. For Dior's Fall/Winter 2020 collection, models walked a runway lit by signs that read "Consent" and "Patriarchy = Climate Emergency".

Originally planned to debut on May 9, the Cruise 2021 show was forced to delay and eventually transition to a digital format. This is the French house's first presentation in Italy, a meaningful decision to support Lecce's people and historic land by collaborating with local Italian artists and musicians for the show. Paris and Lecce have greatly influenced the Creative Director so paying homage to its historic savoir-faire felt appropriate.

“The support for our country is important for both of us, [as is] the support for the Puglia region, which was so badly hit by the crisis and on the edge of bankruptcy, but with a strong will to fight,” Pietro Beccari, Dior's CEO told Vogue UK.

Dior's futuristic idea is just one example of how brands are adapting amidst the pandemic. Chanel also canceled its Cruise 2021 plans to present in Capri, Italy and instead presented a digital lookbook. This past May, big brands and fashion organizations (Dries van Noten, CFDA, and BFC) called for a change of pace from fashions traditional calendar citing concerns of the industry's environmental footprint. Gucci and Saint Laurent have already announced changes to their schedules going forward.

Though the final industry changes have yet to be fully realized, tune in front-row to Dior's show July 22 to see history in the making.