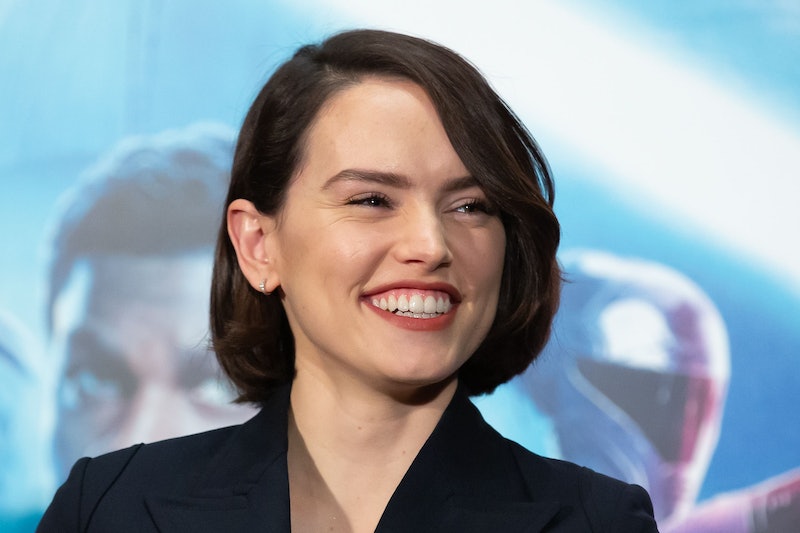 The countdown is officially on. With a little over a week left until Star Wars: The Rise of Skywalker premieres Dec. 20, it seems like excitement for the last installment of the Skywalker saga has reached an absolute fever pitch. And with the cast, crew, and even Pat McGrath herself joining in to promote the upcoming film, it's easy to see why. But at the recent Tokyo promo event for Star Wars: The Rise of Skywalker, Daisy Ridley's hair stole its share of the spotlight — well, when anyone could focus on anything other than the movie.

The runway-inspired look came courtesy of celebrity hairstylist Renato Campora, the artist behind many of Ridley's iconic and ever-changing hairstyles. "Last night Daisy Ridley looked absolutely chic," wrote Campora in an Instagram caption on a photo of the actor in Tokyo.

And Ridley's hair wasn't the only thing influenced by upcoming 2020 trends. The actor looked every bit like space royalty in a two-piece David Koma set plucked straight from the designer's Spring 2020 ready-to-wear show. The high-waisted trousers and boxy sequin top — embellished with a shimmery, sheer cape at the shoulders — mirrored Ridley's look as Rey, too, whose draped, off-white outfit has inspired many a fan (and action figure).

While that futuristic top is unfortunately sold out on Moda Operandi, you can still channel Ridley's runway hair — and probably for a little less than the designer piece's $2,360 price tag. Below, everything you need to try out the wet-hair look for yourself.

Useful enough to "rake" back your hair, pretty enough to be left out on display on your vanity.

For the wet-hair look, it's necessary to invest in products that won't leave your hair feeling completely stiff — and IGK's Rich Kid gel promises to be crunch free.