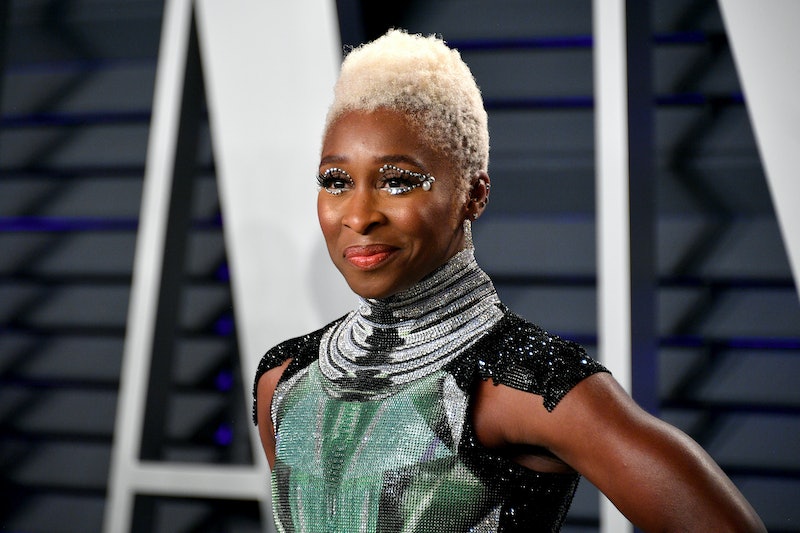 The red carpet has seen plenty of show-stopping fashion moments over the years. Take, for example, the 2019 Met Gala — the annual gathering offered up an array of bold, camp-y looks that were as fun as they were breathtaking. And while many of the outfits that graced the museum's steps proved to be quite hard to outshine, Cynthia Erivo's Harriet premiere look might have done just that. Get ready: The actor's maximalist gown just shut down the red carpet — and it earns a spot on 2019's most-buzzed about dress list, stat.

On Oct. 29, the stars of the forthcoming film, Harriet, arrived at the Orpheum Theatre for its official Los Angeles premiere. The movie, which is set to be released in theaters everywhere on Nov. 1, tells the story of slave-turned-abolitionist Harriet Tubman, with Erivo playing the role of American icon, Tubman. Leslie Odom Jr., Joe Alwyn, and Janelle Monáe also star in the upcoming American biographical drama.

The movie's leading ladies arrived for the Tues. evening premiere in some seriously high-octane outfits, but ultimately, it was Erivo's feather-embellished Marc Jacobs frock — which looked like a true work of art — that took center stage on Oct. 29.

The actor's gown was doused in hundreds of colorful feathers, ranging from a pastel pink to a poppy magenta to a bold orange, all of which popped against the dress' pink base.

Erivo took to her Instagram to share a snap of the dress, accompanying it with a meaningful caption that unveils the reasoning behind this particular dress of choice. "The colors of happiness, the color of the center of Joy. Always Dream In Color 💕 @harrietfilm premiere LA," the actor wrote.

Aside from offering a message or joy and hope, Erivo's gown also introduces — or rather, re-introduces — one major red-carpet trend: feathers. Lavish, airy plumes have been adorned onto everything, from shoes to handbags, acting as a fun and playful detail that also adds the perfect dose of texture to any look.

Now, although you may not be able to wear Erivo's Marc Jacob's gown on a daily basis, there are a plethora of other ways to get in on the feather trend. Shop The Zoe Report's favorite feather-embellished pieces, below.