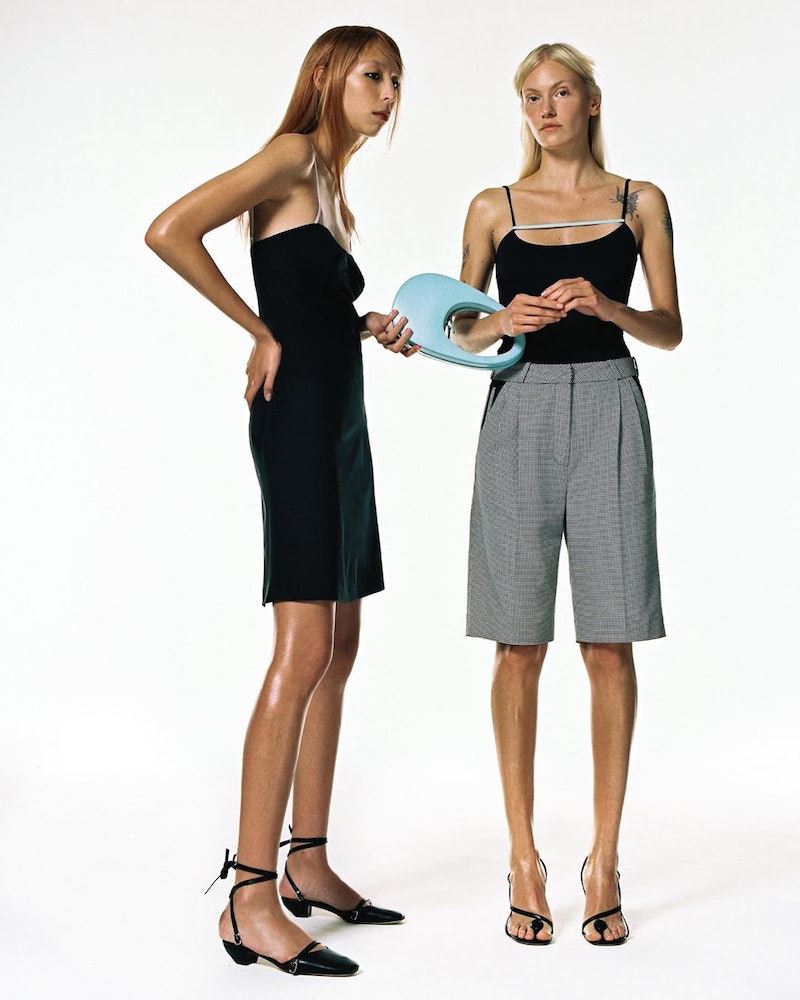 Benjamin Franklin famously declared death and taxes as the only two certainties in life, but for those familiar with the fashion industry, there's a third to consider: the apparent everlasting appeal of classic French-girl fashion. Parisian style has become one of clothing’s most aspirational clichés because of, well, that je ne sais quoi; those who embody it are, as they say, “effortless,” and that any effort at all one expends in order to achieve it negates the purpose.

That doesn’t mean you can’t try. French fashion has been defined by a hyper-specific aesthetic for decades: well-fitting jeans and striped marinière tops, shrunken cardigans and straw basket bags . And French brands of all price points — think A.P.C., Isabel Marant, Lemaire, Sézane, Sandro, and Maje — have erected entire empires on packaging this hyper-specific aesthetic and selling it with a single swipe of red lipstick.

And then there’s Coperni, the Parisian fashion line that ex-Courrèges artistic directors Sébastien Meyer and Arnaud Vaillant first launched in 2013, then relaunched last year after taking seasons off to work on a separate project. Unlike, say, influencer Jeanne Damas’s Rouje that has bottled up Frenchness and reproduced it in the form of $200 wrap dresses, Coperni is doing things a little less literally. While still inherently French, it gives the aesthetic a minimalistic face, with cleaner lines and more tailored structure. It is also a huge hit among French-style-adoring critics and shoppers alike.

Is French-girl style staring down the dawn of a new era? Though stereotypical French fashion should strive to be more inclusive when it comes to sizing, from a purely surface-level perspective, perhaps it’s time to redefine the aesthetic, or at least add an addendum. But if you look closely, labels like Coperni still harken back to the same je ne sais quoi that embodies French fashion as a whole. It doesn’t fit the stereotype — no berets or striped shirts in sight — but it reaffirms that what makes style inherently French is more about culture than clothing.

When Meyer and Vaillant debuted Coperni (then called Coperni Femme) seven years ago, it was one of those instant success stories that registered the pair as rising stars. Meyer and Vaillant were consumed with the new and different from the beginning, going so far as to name their brand after Nicolaus ­Copernicus, the once-radical astronomer who found that the sun, not the Earth, operated at the center of the Solar System. In 2015, the duo were named as finalists for the LVMH Prize for Young Fashion Designers. But that same year, Meyer and Vaillant put Coperni on pause to take the top artistic director job at Courrèges, the futuristic French house which exploded in popularity in the ‘60s. (If there's one decade into which the Coperni aesthetic fits most tidily — with its swingy mini dresses, sharp pedal pushers, and circular, mod-era handbags — it's that same era.)

It was also around this time that French fashion as we know and obsess over it today began taking shape. As youth culture began demanding more accessible fashions, designers including Courrèges’s André Courrèges, as well as Yves Saint Laurent, Paco Rabanne, and Pierre Cardin started making clothing that women were free to style however they wished. It wasn’t just easier to wear. It was — and is — also much more fun.

“French women dress for comfort, and mix and match their pieces with ease,” says Maud Barrionuevo, global buying director at Paris-based luxury retailer 24S. “They tend to gravitate toward quality and thoughtful garments. And most of all, they wear their clothes proudly, rather than letting their clothes wear them.”

Barrionuevo suggests that new French brands like Coperni Marine Serre, Koché, and micro-bag-toting Jacquemus have pinpointed this same attitude with their own designs. The pieces are modern and powerful, and created for women who feel the same.

Like influencer-turned-designer Damas, Anne-Laure Mais is another fixture of the Paris fashion arena who's built a brand of her own on the shoulders of the French-girl. After years of blogging under the pseudonym Adenorah, Mais launched Musier, a line of Paris-perfect essentials like waist-hugging jumpsuits and dainty, lacy button-down chemises, in April 2018.

Mais is also a longtime Coperni fan, often seen wearing the brand’s sleek, retro styles before her nearly 600,000 followers on Instagram. As you might expect in the close-knit Parisian scene, Mais counts Meyer and Vaillant as friends of friends.

In particular, she appreciates Coperni's '60s-with-a-contemporary-twist roots — partially because the label is one of the few brands doing it, and doing it well. It makes for an aesthetic that's refreshing, she says, but timelessly, groovily French at the same time. For customers like Mais, that duality is what makes a retro-tinged brand like Coperni so appealing: It brings something fresh to the table, but not without losing that enduring French appeal of breezy individuality. And isn't that what the quintessential French-girl look is about — to take something new and modern and saturate it with your own point of view?

“The aspect I admire most about ‘French-girl style’ is the effortlessness that contributes to the chicness of the girl,” adds Allison Rich, handbag buyer at Moda Operandi, which carries Coperni. “Though Coperni is more structured in form and retro in shape than we are used to seeing, I do think the simplicity of the styles speak to that ease that we all strive to capture.”

After all, minimalism has been a burgeoning market trend, in part a reaction to the maximalist eccentricity recently pioneered by Gucci’s Alessandro Michele. Among the square-toed shoes, pared-back accessories, and monochromatic dressing, Coperni slides right in.

But alas: What’s the use of discussing trends when French fashion fits squarely outside of them, hence its appeal? Coperni is en vogue because and not in spite of this fact. It is so clean, classic, and consequently chic that it makes for the ideal blank slate for actually-French or more likely, not-actually-French women to wear proudly — without letting it wear them. So it may be time for a new footnote in le manuel on French fashion, but why rewrite it altogether?

“Trends and ‘It’ pieces will continue to come and go according to the fashion calendar's cycles, but the approach to French dressing will remain the same,” says Barrionuevo. “The new Coperni is introducing its own and unique vision, but this vision can actually be reinterpreted indefinitely throughout the seasons.”