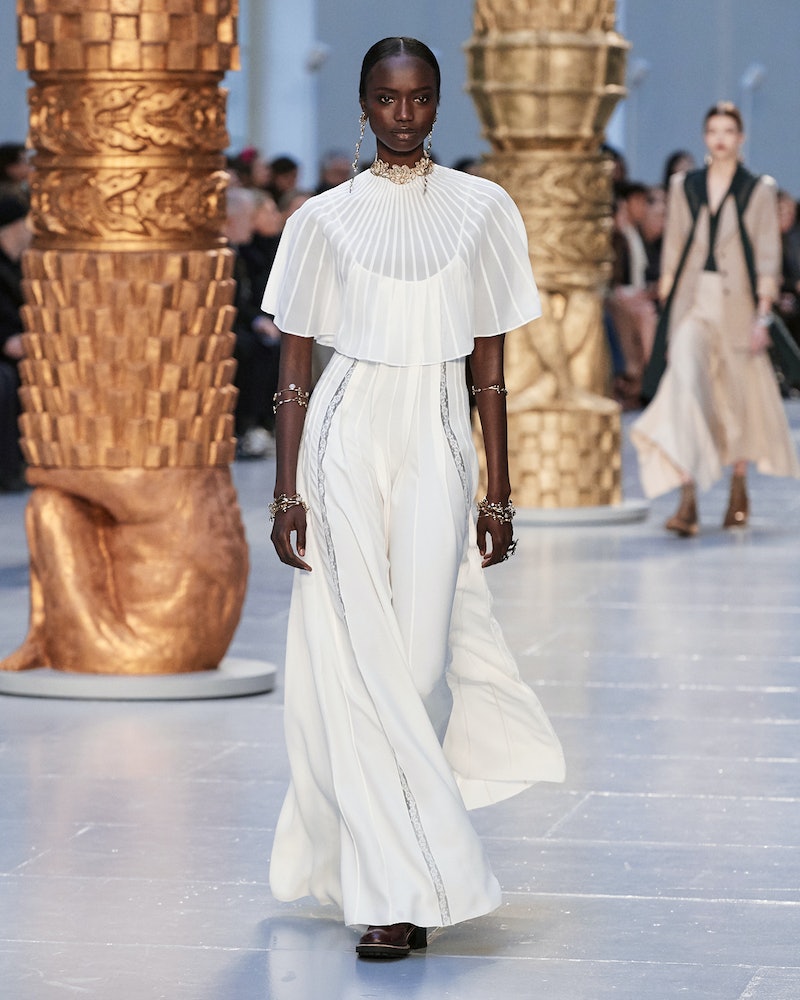 Paris Fashion Week finally feels like it’s in full swing with major labels like Saint Laurent and Kenzo already having shown their latest collections on the runway in the City of Lights. One of the highlights of Paris every season is seeing how the iconic French labels present the local aesthetic. After all, French girl style is a classic fashion archetype for good reason. Chloé's Fall/Winter 2020 Runway Show was an example of how classically French brands can continue to pump out signature wardrobe essentials that feel like they’re fit for the modern, cool Parisian girl.

On Feb. 27, the brand showed its latest at Paris' Grand Palais, an occasion that also marked artist director Natacha Ramsay-Levi’s third year at the label. In the past, Ramsay-Levi has played with both overtly feminine and French bohemian themes, but this season felt like a return to wardrobe basics with creative flair. The looks were reflective of past seasons, but felt pared-back and entirely wearable in 2020. In fact, many of the best pieces from the show were staples your favorite fashion girls wear everyday — in addition to ones you may not own yet, but definitely covet.

Take, for instance, the perfectly flared jeans, soft leather jackets, blazers, or chunky knit sweaters, each item the perfect execution of something simple. And it wasn’t just the clothing itself that represented wearable French-girl chic, but the way in which everything was styled, too. A striped polo dress was worn with flat boots, a doubled-up necklace and a thick belt, for a look that was just the right amount of preppy. Cozy sweaters and cardigans were thrown over printed and denim skirts, solidifying the mix of casual and formal. The effect was a range of winning looks that look as natural on the runway as they would on a real girl walking down Champs Élysées.

That spirit of wearability and realness came through in the creative collaborations with women artists seen at the show too. Painter Rita Ackermann’s archive was transformed into prints on knitwear, jersey tees, and the lining of a tailored coat. Some of Chloé’s signature bags, the Daria and Darryl, were transformed with Ackermann’s prints too.

The set and music of the event took women artists into consideration, too. An installation of sculptures by the French artist Marion Verboom entitled "Tectonies" took over the show space. The golden columns were originally created for the 2019 exhibition Infinite Sculpture: From the Antique Cast to the 3D Scanheld at the Palais des Beaux-Arts in Paris. Sixties icon Marianne Faithfull also created an original spoken-word soundtrack for the show, which took words directly from classic literature works of Louisa May Alcott, Lord Byron, F. Scott Fitzgerald, Frances Ellen Watkins Harper, Christina Rossetti and William Butler Yeats. With a strong collection full of pieces that you could see your favorite modern day creative women wearing in their everyday lives, the collaborations felt perfectly at home.