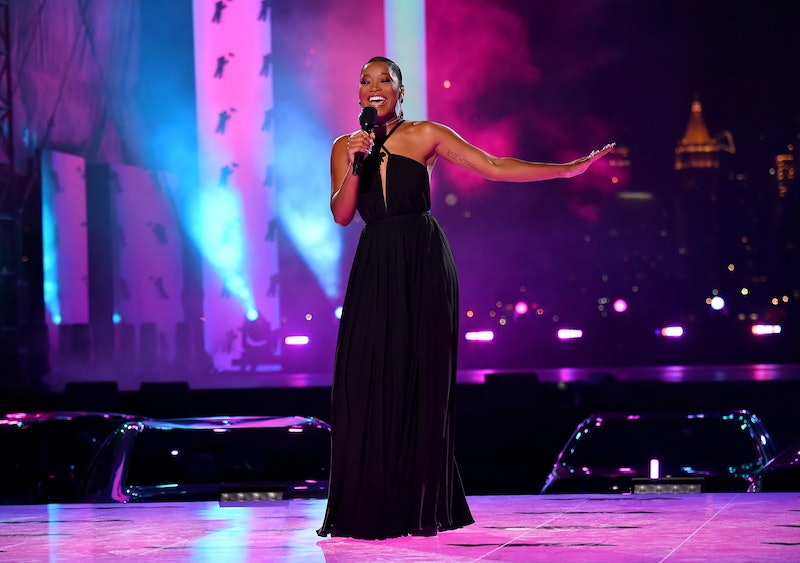 Covid-19 brought Hollywood to a standstill. Gone were the usual premieres and parties, and with them went the red carpets. Most years the Met Gala might be the most important fashion night of the whole year — with stylists and their clients collaborating for months on their outfits. But, the first Monday in May arrived, and like the rest of us, celebrities were at home on the couch. Slowly, awards ceremonies and press junkets have returned, but in new formats: remotely or socially distanced. As celebrity stylists adjust to dressing clients during the pandemic, they're having to re-think not only how they do their job, but why.

Keke Palmer’s impressive wardrobe during her hosting stint for the 2020 VMAs is proof that, in fact, it can be done. “Because of the COVID circumstances currently, I knew I had to do it virtually from LA,” Mikiel Benyamin tells TZR. He’s one of Palmer's stylists who crafted a lineup of looks she wore to host the VMAs in New York. In collaboration with stylist Mel Reneé Leamon and his team of assistants in New York, Benyamin took the lead on two of Palmer’s full looks which included a Ralph & Russo pink halter dress covered in feathers that she wore to open the show and a sleek, black Valentino gown she wore later in the evening.

“For the Ralph & Russo, I worked with my team in New York and with the facilities overseas to make sure everything arrived on time for her fitting,” explains Benyamin. Accounting for any shipping delays or a limited number of options, Benyamin says he had a more edited approach to selecting options for Palmer. “We narrowed down with Keke and saw what she loved the most. She’s very hands-on,” he says. “With the Valentino look, we were so lucky that they had most of [the looks] we wanted for Keke in New York at their office that they had just received from Milan. It worked out perfect.”

Even with a seemingly smooth process for pulling together these outfits, Benyamin says that styling a major award show from afar isn’t his preferred norm. “Seeing [clothing] in person would be so much better for everything. I like to see and feel the material, the length of the dress, how it fits, how we can accessorize it, and how colors are different on camera than in person,” he explains. “That was the most difficult part for me: making sure that colors are matching. Making sure the shoes are the exact color of the dress. Making sure the accessories match perfectly with the dress, match perfectly with the moment that we’re going for.”

However, despite the U.S.'s ongoing emphasis on physical distance, not all styling sessions require a strong WiFi connection. Chloe Hartstein was open to virtual fittings, but says she ultimately met with her client, Supporting Actress nominee and Glow star Betty Gilpin, in person — masked, distanced, and passing steamed garments on a rack rather than hand-to-hand — in preparation for this weekend’s Emmy Awards. Hartstein (who's also styled stars including Dianna Agron, Antoni Porowski, and Glenn Close) and Gilpin are both New York based, while the Emmys are being televised from the Staples Center in Los Angeles. Presenters, nominees, and industry leaders will be joining the show via live broadcast across 114 locations globally. Gilpin will be one of them. Just a few days before the show, Hartstein says she and Gilpin haven't quite finalized how the actress will appear on camera. Will it be a face-framing shot that calls for statement jewelry? Would the viewers be able to tell if she's wearing heels or sherpa-lined slippers? But these aren’t necessarily the most pressing questions stylists like Hartstein are asking themselves right now.

“There’s a lot of things that are coming into play here. Obviously we’re all trying to gauge what this all means,” says Hartstein, referring to the slow return of red carpet events, like the VMAs and the Venice Film Festival, since the start of the pandemic. “We didn’t want to go full glamour, like gowns and diamonds. We went for a little more paired down. There are a lot of people who will be watching the show who are maybe unemployed or been furloughed. Obviously our job in the fashion industry and entertainment industry is to make people dream, but I think we can also create something like ‘we get what’s going on, we understand you.’ We don’t want to be out of place.”

Still, Hartstein’s pared-down approach isn't about being quiet or apologetic. "I will say this," she explains, making sure not to give away any spoilers, "Betty and I are both very politically aware and we definitely decided to use the platform we have, in the moment we have, to motivate people to vote and to raise awareness for the Democratic campaign."

Hartstein may be using fashion as a means to project a greater message, but she also is focused on her main role as a stylist: to make her client feel amazing, especially on an occasion when she's being honored. Andrew Gelwicks echoes the same sentiment when it comes to one of his clients, Lead Actress nominee Catherine O'Hara.

"My approach to this 'red carpet' is to truly just celebrate Catherine and the incredible character she brought to life in Schitt's Creek," says Gelwicks who's been preparing for Sunday evening entirely virtually. Of course, the approach is not far off from Gelwicks' usual work with O'Hara which has included a dazzling metallic Marc Jacobs dress at the SAG Awards, a multicolor Jeffrey Dodds dress in swirling sequins at the Oscars, and a wardrobe of press-tour outfits that could make Moira Rose jealous.

"With the lack of award shows, premieres, and events, I've been able to dedicate more time to some of my other passions," says Gelwicks of his work over the last year. This includes releasing a book, The Queer Advantage, next month and developing an online fashion course for students who weren't able to complete their summer fashion internships due to COVID-19.

"This period has solidified what I had already been thinking - that the landscape of fashion and styling is constantly changing, and it's all about adaptability," says Gelwicks. "It's exciting to work alongside so many other fashion professionals who are out-of-the-box thinkers and problem-solvers, and always up for whatever challenge is in front of us."