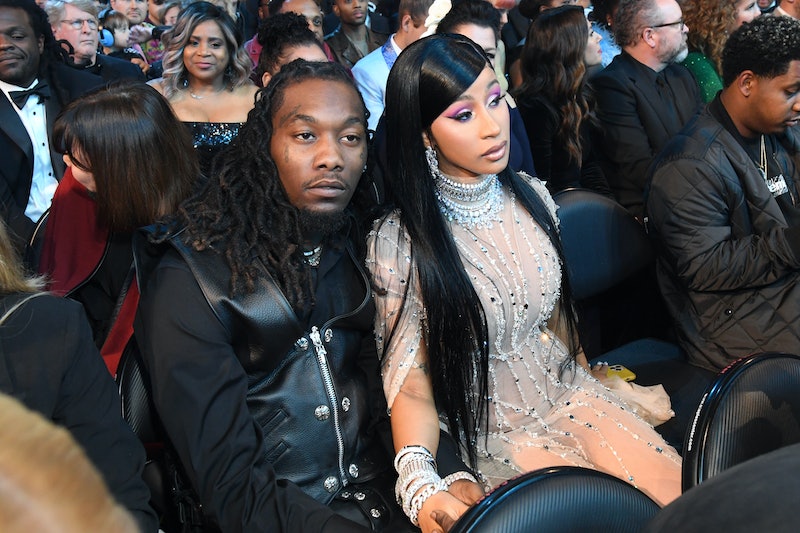 Yes, award show red carpets are largely watched for the gowns and stunning beauty looks. However, nothing shines quite like a diamond, which makes jewelry another hot component to keep an eye on. Case in point: Cardi B's 2020 Grammys look, which included an extravagant two-piece Gismondi 1754 necklace that cost a cool $5 million.

Although the singer snuck slyly into the 62nd Annual Grammy Awards without hitting the red carpet (which is why you probably missed the dazzling look), her ensemble and pricey accessories were truly a can't-miss. For her gown, Cardi B went with a sheer custom Mugler gown by creative director Casey Cadwallader, which featured a mermaid silhouette and cape dripping in strings of diamonds from head to toe. As if that wasn't decadent enough, the ante was upped with the custom neck piece — which was quite the undertaking to put together.

According to an emailed press release from Gismondi 1754, the singer's stylist Kollin Carter was instantly drawn to the brand's High Jewelry classic necklace in white diamonds as the base piece for a "regal collar" look, and went on searching for another "modern" piece to pair it with. As explained in the release: "Without luck and time running out, Massimo Gismondi's team sought to build one. Showing Kollin a series of single strand necklaces and chokers to combine, the plan for a 'one-of-a-kind' Goddess necklace was set in motion."

Eight strands of diamonds were selected by Carter and approved by the Mugler creative team to ensure the right vision was materializing. However, because there was no fitting with the artist, each piece needed to be "placed, adjusted, nested, and actually sewn onto the artist for the final look as a last step before leaving for the venue," reads the release. 'Twas well worth the effort as the final result was a one-of-a-kind Goddess two-part necklace with over 310 carats of white diamonds and priced at over $5 million dollars retail. Wow.

If you missed a shot of Cardi B's luxe look, you're in luck. Some shots of the singer's ensemble were captured that'll allow you to live vicariously for a moment. See it below and enjoy this diamond-filled feast for the eyes.