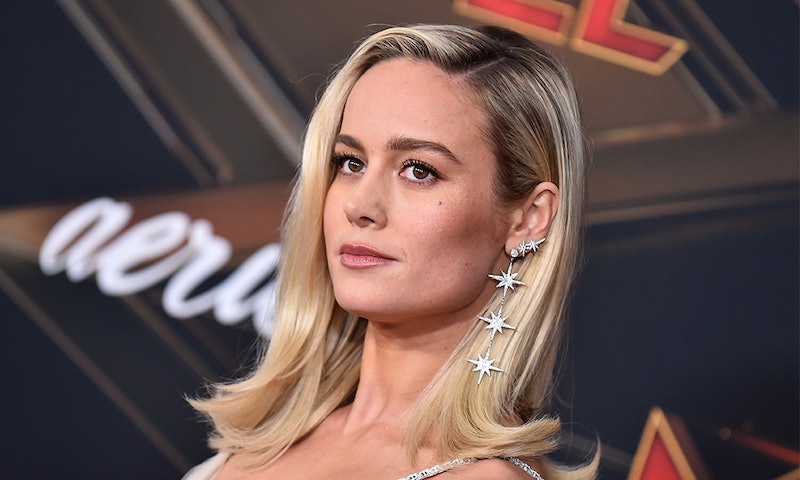 Gigi Hadid's 24th birthday party may have shut down New York City on April 22, but Mon.'s Avengers: Endgame premiere was certainly the can't-miss event on the West Coast. Considering the upcoming superhero epic is Marvel Studios' conclusion to 22 films, it should come as no surprise the biggest names in Hollywood showed for the grand soirée, churning out some of the best fashion and beauty looks of the month. Though Zoe Saldana's magenta Givenchy gown and Miley Cyrus' fringe made for two memorable moments, it was Brie Larson's purple dress that ultimately won the evening.

Larson's Avengers: Endgame press tour looks have ranged from simple and sleek to vintage-inspired (talking about you, ruffle-embellished Rodarte gown), which had everyone wondering which direction she would take for the film's official L.A. premiere. Finally on Mon., all speculations were put to rest — and it's safe to say the actor's gown of choice certainly didn't disappoint.

Larson showed up to the premiere in a stunningly elegant frock that instantly commanded the red (well, purple) carpet. Her lilac dress was a custom-made Celine number — a designer she's been known to wear time and again — and featured a plunging V-neckline, dainty spaghetti straps, wrap-effect detailing along the waist, and a daring side slit. It was the epitome of Old Hollywood glamour, but with a bit of edge.

Nina Park, the mastermind behind Larson's premiere makeup, went with a bronzed smoky eye, glowing skin, and a nude, glossy lip. This more understated approach proved to be the ideal pairing to her pastel-hued gown.

Of course, fans of the superhero epic were quick to take note of Larson's jewelry, too. The actor showed up to the premiere wearing a set of custom-made rings by Irene Neuwirth, making a subtle nod to Thanos' Infinity Gauntlet.

Although vivid colors like magenta and neon green were all over the Spring/Summer 2019 runways (and made a appearance on the Avengers: Endgame red carpet, too), Larson's latest look makes a convincing case for more understated, subdued hues like lilac and powder blue, the latter of which Kate Middleton just wore.

Inspired by Larson's purple dress? Ahead, shop The Zoe Report's roundup of lilac-colored pieces to wear all season long.

This slip dress would look so good with this season's ever-popular "ugly" shoe trend: chunky sandals. Of course, you can't go wrong with white sneakers, either.

Wear these lilac sandals with everything in your warm-weather wardrobe, whether it's a white linen dress or sporty bike shorts.

This easy, breezy frock is all you'll want to wear this season.