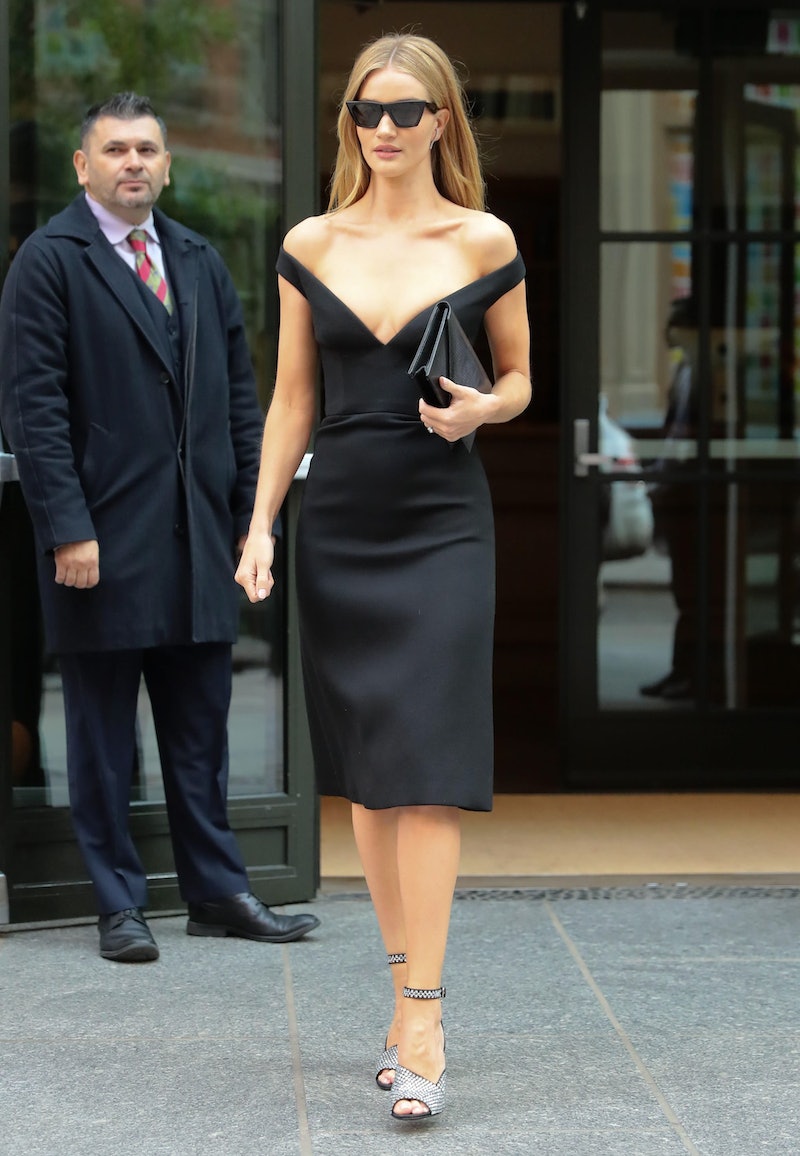 Fitness fanatic or not, it's likely you've heard of Simone De La Rue. The former dancer and founder of the Body By Simone workout classes started her studio in 2011 in New York City, and was an instant celebrity favorite from the time she began training. Since then, De La Rue has launched a book, opened multiple studios, and gained stars like Jennifer Aniston and Chrissy Teigen as fans. Despite all the buzz, though, I'd somehow made it to 2020 without trying any of her workouts. So when Rosie Huntington-Whiteley said her quarantine go-to was the Body By Simone app, I decided it was finally time to test it out for myself.

Though it launched in 2018, the BBS app has gotten some upgrades as of late — in 2019, it started airing daily live classes to its subscribers, essentially just in time for everyone in the world to take their workout classes from the studio to the living room. (Thanks, 2020.) Through those various class formats, the app offers high-impact dance, trampoline, and HIIT cardio, and resistance and toning work that's designed to be "graceful, powerful — and fun," as the brand's site explains.

Apparently, De La Rue's workouts are also "so freakin hard, it's unbelievable," as Aniston once told Harper's Bazaar. So while I'm not a *major* dance or trampoline cardio fan, I do love a toning and resistance class — especially one that's deemed difficult by celebrities who have access to the best trainers and fitness courses in the world.

As you can imagine, then, it didn't take much convincing for me to take advantage of the BBS app's free trial to see what all the fuss was about. A full review of my two-week-long experience, ahead.

Body By Simone: The App Setup

After downloading the app, I figured I would just open it up and start playing some workouts; instead, I was greeted by a series of choices designed to help me reach a specific goal through a tailored workout and meal plan. I loved that it felt like a bespoke experience, but I was disappointed to discover that the only objectives to choose from were "Trim Down" and "Tone Up." However, my goals were to get moving more often and feel stronger, so I chose "Tone Up" with the intention of picking my workouts based on how I was feeling and what I wanted to work that day.

After that, I was asked a few more questions, like my food preferences for the nutrition plan and how often I wanted to sweat, and was taken to my personalized profile with recommended workouts and recipes for the day. While, again, I wasn't doing this to reach any big goal and I wasn't looking for a meal plan, I did love that it made it easy to just open up the app to class and food suggestions each day, even if I did end up choosing my own.

One of my favorite parts of the BBS app was the amount of options — it contains a huge library of routines, so it's basically impossible to get bored, even if you don't love dance cardio or don't own a trampoline (like me).

As mentioned previously, BBS is largely made up of dance, trampoline, and HIIT cardio, as well as resistance and toning work. To break it down further, there are also live classes offered every day (each one is recorded so you can watch afterward) that usually last 30 minutes. There are also tons of quick pre-recorded workouts, typically about 10 minutes long, that focus on one or two body parts and are great for adding onto a live workout or doing alone if you want something short.

My favorites were the live workouts, and I typically did one a day, switching up the area of focus (so arms, back, and core one day; hips, buns, and thighs the next, for example). They were the perfect length for me, and I rarely felt like the classes were too easy.

However, almost all the toning classes required some sort of equipment which I didn't always have. Often, the instructors would give alternatives, but when they didn't, I would just have to find another workout (which, admittedly, was easy with the plethora of choices).

I also wish that the instructors provided more modifications during the workouts. As someone who isn't super strong and has pretty severe lower back pain, I couldn't always do some of the more difficult moves or ab routines, but I didn't notice a lot of guidance on alternatives or ways to make things easier. Because of that, it might be helpful if you have some baseline fitness knowledge before using the app — I was able to make my own modifications or just sub in moves I already knew, but if you've never taken a workout class before, that might not be safe to try.

After two weeks of using BBS and trying almost every type of workout it offered, I fully plan on continuing to subscribe to the app, which feels like a bargain at $19.99 per month compared to the in-person workout classes I paid for pre-COVID.

Though there were a few aspects I didn't love — instructors didn't always give alternatives for equipment or difficult moves, some of the class formats were a little repetitive, and the objectives were too narrow — I found that I could easily work around those personal issues by choosing my own workouts and mixing things up when I got bored. Which, to be fair, was rare — most of the classes were actually really fun, and just difficult enough for me as someone who works out semi-regularly. I even enjoyed a few of the dance routines I tried, although I couldn't always follow them well.

Overall, if you have some baseline fitness knowledge and you're looking for a workout platform that also has healthy recipes and provides a wide variety of hard (but not wildly difficult) cardio- and resistance-based fitness classes, I think it's worth the monthly cost — and if you're not sure about committing, well, there's a free trial for that.