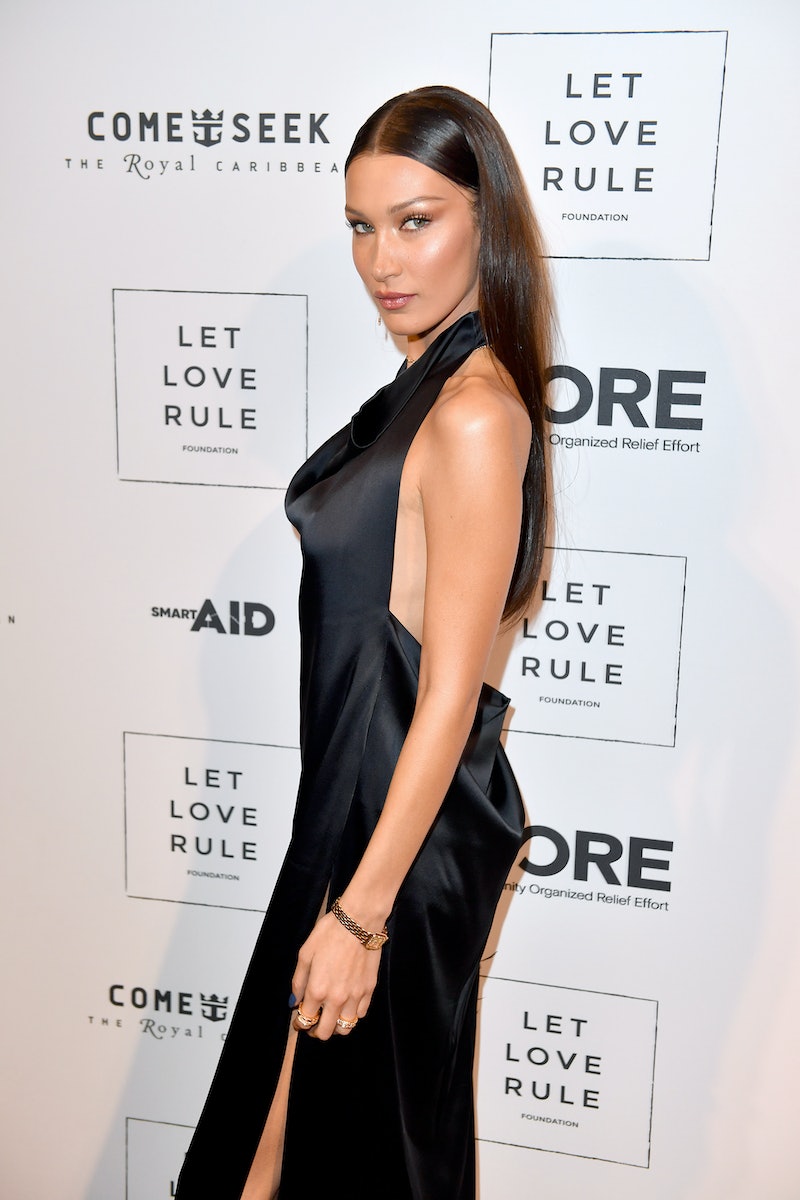 Head over to Bella Hadid's Instagram and you'll notice that a few days back, on Dec. 10 to be exact, she posted a trio of images from a just-released campaign for Alexander Wang. Surely, you're thinking that this is nothing new for the supermodel, who regularly stars on billboards, magazine spreads, and commercials all over the world. But there was something particularly striking about this fashion shoot — and it's safe to say that Bella Hadid's platinum blonde hair had something to do with it.

The ultra blonde moment appeared in just one in the series of three posts Hadid uploaded to her Instagram, alongside a gushing caption that read in part "Couldn’t have asked for a better day. 🖤Love you 3 🖤" And there's no doubt that image caught the most eyes, considering the captivating icy platinum hair (and the smoldering stare she's giving the camera). In fact, it received more likes on the social media platform than the other two images combined, so her fans were clearly as smitten with the look as she was.

Hadid's bright new mane was paired with new designs from Alexander Wang's upcoming Collection 1, to be released in 2020, including a sleek blazer, unbuttoned trousers, and a bra and undies by the brand — all in a white hot ivory hue that complemented her hair. Cherry red nails and a snow white cat in her arms completed the look (naturally).

Due to the flurry of off-set hair transformations of late, from her super-short bob to her long, wavy hair — all notably in her signature shade of deep brunette — it's pretty clear that the platinum color was by way of some amazing wig work. Hadid tagged hair artist Jimmy Paul in her Instagram post, so you know who to thank for your newly burning desire for blonde hair.

Hadid's chameleon-like status as an in-demand supermodel and the confidence with which she pulls off every change make it pretty impossible to guess what kind of mane she might debut next. Because seriously, what color can't she make chic? But until her next big reveal, why not take a page from her book and try a major transformation of your own?

Before you take the platinum plunge, you'll want to stock up on some very important blonde hair care to keep you looking icy all season.

You'll want to avoid any hint of yellowy, brassy undertones after you leave the salon. This shampoo eliminates those tones, with a gentle formula that keeps hair soft and strong.

Wella's Cool Blonde Conditioner has a 4.7 overall rating at Ulta, so it's a safe bet to scoop it up once you've gone platinum. Reviewers say it makes hair soft, smells great, and moisturizes effectively to extend color and keep hair healthy.

This purple hued mousse is a weightless leave-in treatment to cancel out brassy hues, while also detangling, hydrating, and softening hair. It's an effortless and effective way to lengthen the time between colorist appointments.