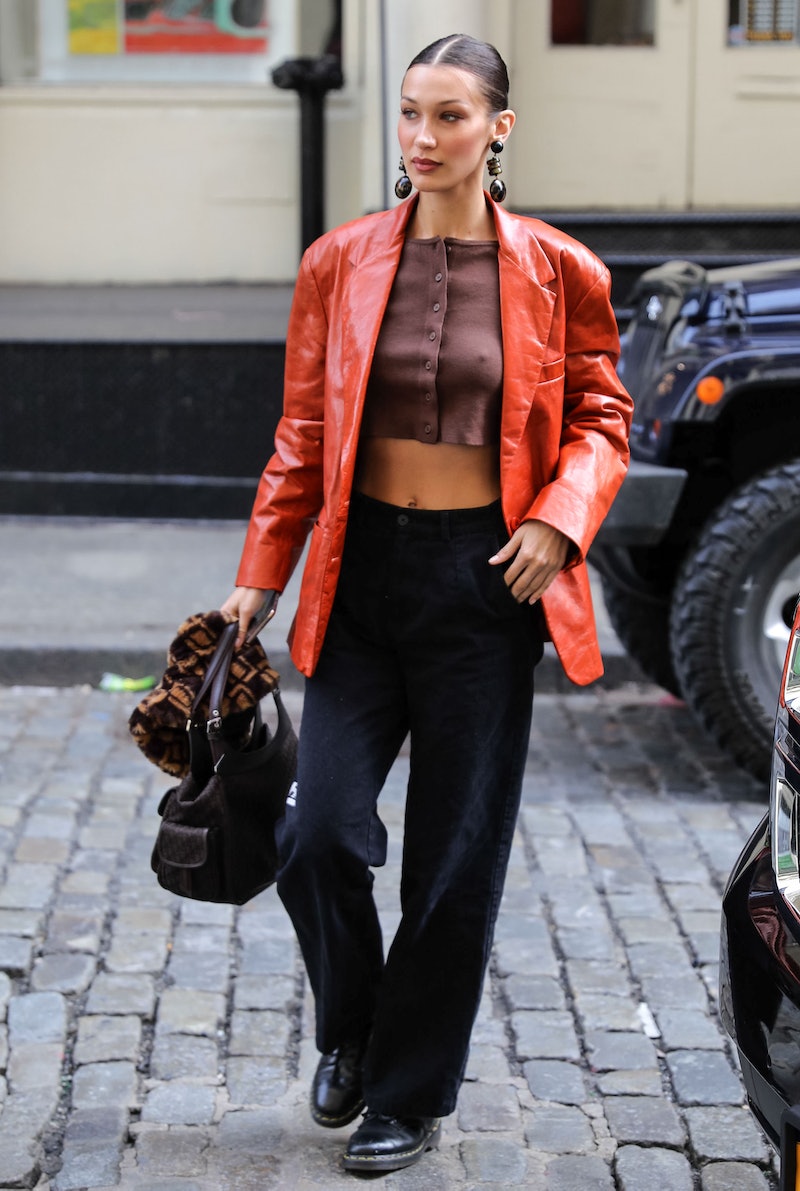 In the name of boredom (breakups, lulls, or just hard times), cutting your hair DIY style — especially into bangs — doesn't seem as bad an idea as it normally would. And although the at-home alteration is widely discouraged by professionals, Bella Hadid just cut her bangs by herself, and the result is surprisingly good. Like, so good you might actually pick up the sheers that have been calling your name since quarantine started.

Making the chop from no bangs whatsoever to full-on, face-framing fringe can be scary when done by a professional, let alone by yourself. But if TikTok and Hadid have any say in the matter, it's that things can turn out amazing without expert hands. On April 19, the 23-year-old model posted multiple videos on her Instagram stories feathering her new bangs with the simple caption, "I cut my bangs." With the rest of her hair pulled back in a claw clip she helped revive from the early 2000s, Hadid's piece-y, side-swept bangs took center stage.

The fringe, which hits around the crease of her eyelid, is an easy entrance into the world of bangs. You can push them to the side as Hadid does, or let them fall forward and straight across, which Hadid opts for in other videos. Much like your sourdough starter, this fringe is the perfect bang starter.

If you're thinking Hadid should switch professions and start her own hair salon, she did have the help of celeb hairstylist Jen Atkin to walk her through the process. But, it was Hadid's hands doing the trimming, and after asking fans through an Instagram poll whether they would let the star cut their bangs (as of right now, 80 percent say "yes so cute"), Hadid went on to trim fellow model and best friend Leah McCarthy's bangs while her sister, Gigi, gave McCarthy an entire haircut (with a little more guidance from Atkin, of course).

Though the Hadid sisters' salon is *very* exclusive, getting bangs isn't. Watch a few videos on YouTube, follow celebrity hairstylists on Instagram for their tricks, and if you mess up, no one's really going to see — barring your roommate or pet, and they've already seen you wear the same sweatpants for a week straight. As Hadid proves, you might be more skilled than you thought.