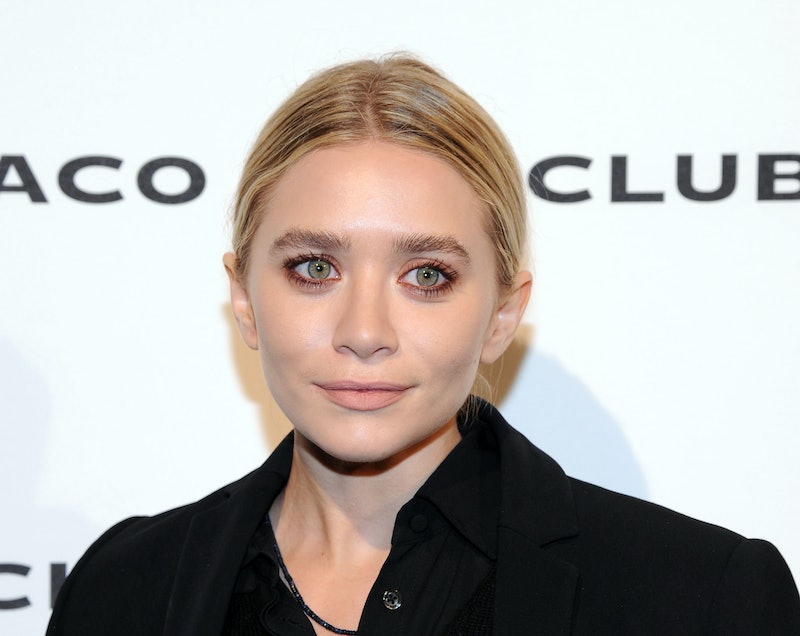 For mere mortals, summertime means shedding as many layers as possible and fervently fanning yourself while simultaneously blotting the sweat from your upper lip, but that sort of seasonal fiasco doesn't plague certain style gods — namely, the Olsen twins. Sartorially and otherwise, the actors-turned-designers have always marched to the beat of their own drum, and Ashley Olsen's oversized trousers were the latest offbeat street-style staple to hit the public. Spotted out in the Pacific Palisades for a trip to the cinema, Olsen was serving incognito minimalism that quietly ignored all seasonal style rules the rest of the world abides by.

The all-black look featured roomy knitwear on top, loose-fitting trousers, and leather slides, falling in line with the understated quality of the 33-year-old's fashion label, The Row. A cozy pick for a low-key movie date, the slouchy getup offered ample movability for curling up in a ball during Mufasa's death scene in The Lion King live-action remake. Sporting a signature disheveled low bun and large aviator sunglasses, the California native clearly wasn't there for photos, but managed to capture a quality of refinement amongst the less-is-more look.

Echoing the understated craftsmanship and structured line work seen throughout the designer's luxury label, the monochromatic look served as a rebellious take on low-key coastal style. With a frayed hem channeling the free-spirited bohemia the twins have been known for over the last decade, Olsen perfectly struck a tricky balance that can be filed under DGAF-chic.

If you want to ward off the Sunday Scaries with an ultra-cozy look that's still appropriate for the outside world, or you're looking to infuse your office attire with a hint of Olsen's signature cool-girl flair, a pair of roomy trousers will do the trick. Shop The Zoe Report's selection of similar picks that will surely channel the airy-yet-refined vibe, ahead.

It doesn't get much more classic than these wide-leg pants, so you'll surely reach for them time and time again.

Pair these ultra-high-rise slacks with a ribbed tank, chains, and sneakers to put an avant garde spin on the go-to outfit of Summer '19.

Whether you opt for chunky sneakers or classic pumps, these pants from Marc Jacobs are the epitome of cool.

Cross over to the light side with these faded pink wide-leg pants and pair with a statement micro bag.

Thanks to a timeless silhouette and endless versatility, these wide-leg trousers will transcend trends and stand the test of time.

Pair this belted option with leather slides and a straw bag for summertime sophistication done right.

Opt for a a touch of relaxed luxuriousness with the help of these satin, ivory pants from Nili Lotan.