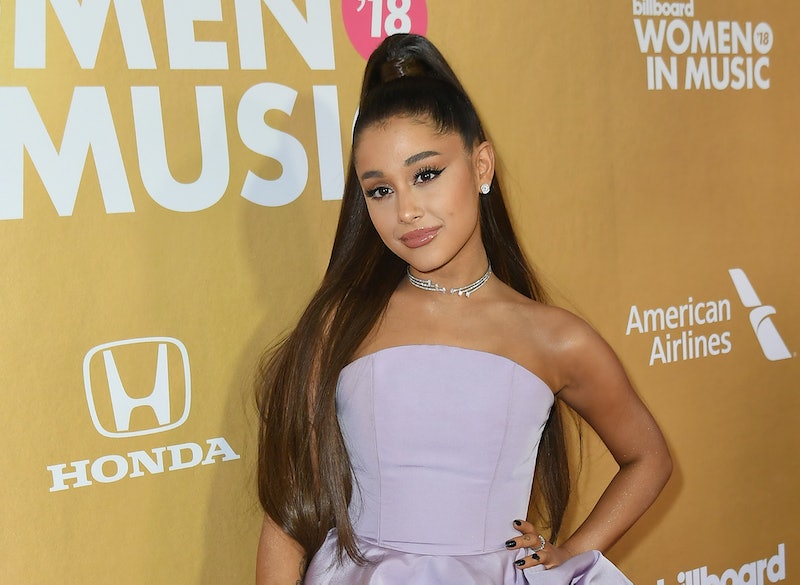 Among the Instagram videos of celebrities' workout routines and attempts at cooking, you've probably noticed another trend that's been emerging from the very beginning of quarantine: pink hair dye. For an unexplainable reason (boredom? curiosity?), a growing number of stars have been turning to the color to give their hair a *very* new vibe. Yet with all beauty trends, it's inevitable that it will leak into other categories — and it seems that's exactly what this shade has done, and quickly. Because as Ariana Grande's makeup in the "Stuck With U" music video proves, this quarantine color trend is now taking over makeup bags, too.

Amidst a dancing Justin Bieber (with whom Grande released the song), Hailey Baldwin, and other famous couples and fans, Grande appears singing throughout the just-released video in self-filmed clips decked out in her usual high ponytail and cat-eye. But, in a slight deviation from her usual look, Grande chose a magenta-like pink for her lips and eyelids that grows more and more evident throughout the song.

To be sure, Grande isn't the first celebrity to publicly appear in a full face of pink makeup during quarantine. Kylie Jenner's been trying it out in different iterations, as has Elle Fanning — both of whom are often known for being trendsetters in the beauty space. But now that Ari's given it her stamp of approval — in a viral video, no less — all-pink makeup is sure to start making more appearances, and fast.

While Grande's makeup is a noteworthy part of this release for fans and makeup lovers alike, it's definitely not the only reason the new music video is worth watching. Most importantly, the net proceeds from the streams and sales of the song will be donated to the First Responders Children’s Foundation, which, according to the video's description on YouTube, helps "fund grants and scholarships for children of healthcare workers, emergency medical technicians (EMTs), paramedics, police officers and firefighters serving at the front lines during the global pandemic."

It's also the only collaboration between Grande and Bieber so far, a first that's garnering excited reactions from both fans and the singers themselves. "I can’t fully articulate ……… howwwww happy i am that we waited this long to do this (the duet thing)," wrote Grande in an Instagram caption teasing the song on May 7. "This moment really means so much more than it ever could have if it had happened any other way or if it had been any other song."

Plus, the song (and video) itself is a sweet, sentimental listen that will have you in your feels from the very beginning. Thanks to Bieber, who called on fans to submit clips of themselves "having fun in quarantine," the video is a reminder to enjoy the time stuck with the ones you love. But whether you're watching because it's been deemed the "duet for our times" or you're looking to recreate Ari's pretty pink look, all your listens, watches, and shares will go toward a good cause — which is reason enough to put it on repeat.