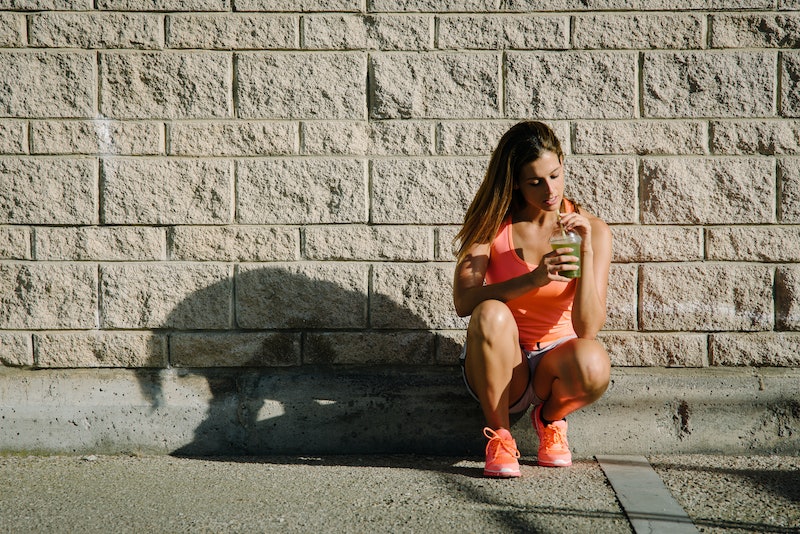 Head to any gym, and you're bound to see fellow exercisers taking gulps from a frothy shaker. Or, maybe your co-worker comes to the office sipping breakfast instead of a cup of joe. It's no secret that protein supplements are trendy — particularly among the health-conscious — so you may be wondering: Are protein powders right for you?

First, some general benefits. "Studies show that consuming protein powder can aid in exercise recovery and muscle repair, as well as support muscle growth," explains Kit Broihier, MS, RD, LD, and registered dietitian and president at NutriComm Inc. in South Portland, Maine. Further, "It's a handy option if you’re following a lower-calorie eating plan and having a hard time getting in the proper amount of protein because you’re eating less food overall." She adds that a scoop of powder in a morning smoothie in place of fruit can lower sugar content and also keep you full longer.

That said, Phil Catudal, NASM celebrity trainer and author of JUST YOUR TYPE: The Ultimate Guide to Eating and Training Right for Your Body, warns that going overboard on the health craze is actually unhealthy. "Supplements, including protein, are just that — supplements," he says. "A protein shake or bar a day is a great way to make sure you’re hitting your protein needs, but I like to see at least 75 percent or more total calories come from food."

Dr. Aastha Kalra, founding physician of Weight Zero MD, agrees that it's all about balance. "I personally recommend a low carb/moderate protein diet (not high), as most of my patients have insulin resistance; but for athletes or those who need some muscle building, proteins are essential."

But when it comes to choosing a brand, she says, buyers beware: Dr. Kalra advises checking nutrition panels for excess sugar and calories and notes that "the more natural, the better." Further, she says, the supplements aren't regulated by the FDA, so it's essential to do your research. As for a good place to start? "A non-profit group named Clean Label Project released a report where certain protein powders contained toxins such as heavy metals, BPA, and contaminants," she shares. (You can see and search for brand ratings here.)

Yes, the sheer amount of protein powders on the market can be overwhelming, but the good news is, there's one out there for just about every lifestyle — you just have to find it. "Decide what aspect is most important to you and focus on that," suggests Broihier. "Whether that’s having something plant-based, or unflavored, or organic, there is a powder out there for you if you want it."

Ahead, Catudal breaks down the pros and cons of some of the most popular protein powders out there, and it's all backed by Dr. Kalra. From the ever-common whey protein, to vegetable and plant-based varieties, this list doesn't cover everything on the market, but it'll help narrow your options. So whether you're looking for a morning breakfast boost, an afternoon pick-me-up, or a post-workout recovery drink, read on; your hunt starts here.

Even most protein powder rookies have heard of whey, and for good reason. It's "the easiest, cheapest, most widely available, and [most] customizable protein," says Catudal. "It’s a staple in weightlifting culture because of it’s easy mix-ability, quick absorption, good taste, and [it was] the first available powdered protein."

Whey is a complete protein (meaning it contains all nine essential amino acids) and is derived from milk; it's the liquid that's separated from the curds when cheese is made.

Who it's best for: "All body types that exercise in any way and are needing the reparative powers of protein," says Catudal.

Who should avoid it: Anyone who's looking to decrease muscle mass or keep it to a minimum. Those who are lactose insensitive or intolerant should also steer clear.

Potentially negative side effects: "Lots of people report bloating, with some having skin issues and breakouts," says Catudal. This may be related to dairy sensitivities.

Casein, another complete protein source, is one of two milk proteins — whey being the other — but there is a key difference between them. "Casein is a slower-digesting protein and is almost as bioavailable (how much your body absorbs) as whey, but it’s shown to have muscle-promoting properties," clarifies Catudal.

It may not taste as good as whey, but for anyone looking to build lots of muscle, casein seems to have the edge.

Who it's best for: Body builders or those looking to substantially increase muscle mass.

Who should avoid it: People who are dairy-sensitive or looking to muscle down.

Potentially negative side effects: "Just like whey, casein is a dairy-based protein, so the same issues of inflammatory-based conditions and bloating may occur," says Catudal.

Egg white protein, made from dehydrated egg whites, is touted for its high quality and easy digestibility. "Considered the 'gold standard,' all other proteins are compared against egg protein in terms of bioavailability," Catudal explains.

While whole eggs also have a healthy dose of nutrients, the protein powder version, which is also a complete protein, will help limit the fat, calories, and cholesterol that would normally accompany an omelette.

Who it's best for: All body types.

Who should avoid it: Nobody, unless they have a sensitivity or allergy to eggs.

Potentially negative side effects: None (again, barring an allergy).

"The king of original vegetarian and vegan proteins, soy is a plant-based protein that is used heavily in endurance sports and vegan diets," explains Catudal.

Made from ground up soybeans, this powder is naturally high in protein and low in carbs and fat and can help build muscle for those who lift weights or strength train.

Who it's best for: Those looking for a vegan protein source to add to their diets or accompany their workout routines.

Who should avoid it: Anyone with a soy sensitivity or allergy. Those who already have a moderate amount of soy in their diets should also limit their intake (more below).

Potentially negative side effects: Although soy is nutrient-dense and is a complete protein, its downsides make it a controversial topic amongst health experts. "Soy has many links to the hormone estrogen, and many people report feeling changes in their bodies due to the hormone disruption," says Catudal. He also notes that some consumers experience bloating, skin issues, water retention, and stomach aches with this protein.

But for those who opt for soy, he recommends practicing moderation and limiting the beans elsewhere in your diet. "Organic-based [ingredients] and [protein] isolates are keys with soy, due to potential hormone disruption from too much and/or low quality," he adds.

The protein extracted from peas is a popular option for those with food allergies or who live a vegan or vegetarian lifestyle. In addition to supplementing diets, it also helps build muscle when combined with a consistent workout routine.

"Most pea proteins are mixed with other greens and plant-based products in a powder since they have similar taste profiles," the trainer notes.

Who it's best for: Just about everyone (save for those with sensitivities). And because it's often blended with other veggies, "it’s especially great for people who need an extra greens, fiber, and a vitamin boost," Catudal mentions.

Who should avoid it: Anyone whose stomach is sensitive to raw vegetables. Also, Catudal points out it has a "thick, filmy texture and aftertaste many people don’t like."

Potentially negative side effects: He adds that this protein can leave many people feeling bloated and gassy.

Although it's derived from the starchy grain, low-carbers take note: brown rice protein is made by separating the protein and carbohydrates, so it doesn't have to throw your diet. "Rice protein is very easy to use, find, and [an easy way to] vary protein sources," says Catudal.

However, this is not considered a complete protein source, as it's low in lysine, one of the essential amino acids.

Who it's best for: Pretty much anyone.

Who should avoid it: No one, unless they're on a grain-free diet.

Potentially negative side effects: None.

There are mixed reviews as to whether hemp is considered a complete protein (it may be too low in certain essential fatty acids; more research needs to be done). However, Catudal points out that it "delivers a rich omega fatty acid profile," something most other protein powders are lacking. It also contains fiber and other nutrients.

Hemp protein comes from powdered hemp seeds, which are harvested from Cannabis sativa. While hemp products may contain trace amounts of THC, it's not enough to elicit psychoactive effects.

Who it's best for: "Hemp is a great addition to everyone’s diet," says Catudal. Plus, it may be especially beneficial to vegans or non-fish eaters looking for a plant-based source of omega fatty acids

Who should avoid it: No one.

Potentially negative side effects: None. However, it may take a certain palette to enjoy its earthy taste.