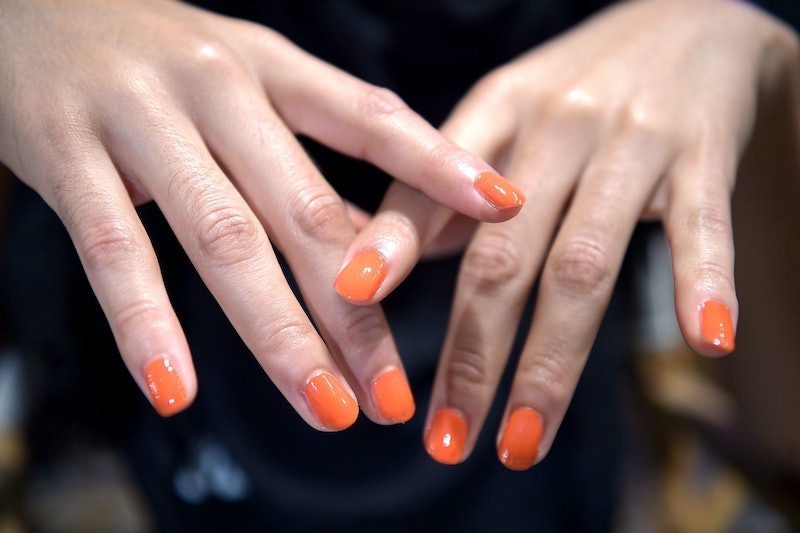 While skincare and makeup are probably the first categories that come to mind when you think “clean beauty,” a third group is also on the rise: nail care. The search for non-toxic nail polish has led many to trade acrylics and gels for powder dip nails, which are said to be a safer option… but are powder dip nails harmful? Well, there’s not really a straightforward answer.

First thing’s first: Even though salons may advertise dip powder nails — essentially, powdered acrylic polishes sealed with heavy-duty base coats and topcoats — as “natural” or “organic,” that’s not quite right. Those terms (along with clean, green, and non-toxic), are not regulated by the FDA... so basically, they’re marketing catchphrases that consumers can't always accept at face value. As for why powder nails are being marketed this way in the first place, it’s because they (supposedly) don’t carry as many risks as acrylics or gels.

The main benefit to opting for this treatment over gels — besides the fact that dip powder nails can last a full eight weeks without chipping — is that no UV light is needed to seal the polish. Studies show the UV light emitted from nail lamps slightly increases your risk of developing skin cancer; it’s even been found that in less than 10 minutes under the gel lamp, “a person’s hands receive an energy dose equivalent to the day-long recommended limit for outdoor workers,” according to the Journal of American Academy of Dermatology.

Yet even without the UV light, many have safety concerns about dip powder nails. “I personally don’t like dip powder for a variety of reasons, the first being sanitary concerns,” Mazz Hanna, a professional nail artist known for working with Emma Roberts and Kacey Musgraves, tells The Zoe Report. “You technically aren’t supposed to dip different clients’ fingers into the same pot, even though this is something salons do quite often.” Dipping nails directly into a pot of powder, or even sprinkling powder on top of the nail and letting the excess fall back into the pot, increases the risk of bacterial contamination, which can lead to infection. This should be a non-issue at reputable salons, but like Hanna says, it happens.

Getting the fine powder to actually stick to the nail poses another potential risk. Dip powder nails require a base coat of cyanoacrylate… which is the main ingredient in Krazy Glue. Forms of this ingredient are restricted for use in cosmetics in Canada and classified as an irritant by the European Union, per the Environmental Working Group; but as of now, are cleared for use in the U.S.

As one can imagine, removing a manicure set with Krazy Glue isn’t the easiest thing in the world. Like gels and acrylics, powder dip nails need to be soaked off in acetone — and the longer your dip powder mani has been on, the longer it will take to soak off. "It may be fifteen minutes if you take them off the same day, but if you wait two weeks or four weeks, it could take thirty minutes,” Dough Schoon, a scientist and co-chair of the Nail Manufacturers Council, previously told SELF. Since acetone is not great for nails — it dries them out and leaves them susceptible to breakage and peeling — a 30-minute soak twice a month could significantly weaken and damage nails over time.

Finally, the powder itself may be problematic. “The product is basically just glorified acrylic, which is notoriously toxic and damaging to the nail plate,” Hanna says. Acrylics and dip powder nails share the same base ingredient, acrylic ester polymer, just in different forms. One study on rabbits and guinea pigs in the International Journal of Toxicology found that in high concentrations (to be clear: higher concentrations than would be on your nails), the ingredient is carcinogenic and has the potential to cause “dermal irritation” and “nasal irritation.”

All that being said, opinions on the safety of dip powder nails vary, and there’s just not enough data out there to say, point-blank, “Dip powder nails are dangerous.” As long as you’re visiting a reputable salon with the right safety precautions in place, it’s probably fine to try the trend for yourself — just remember to give your natural nails a break every once in a while.