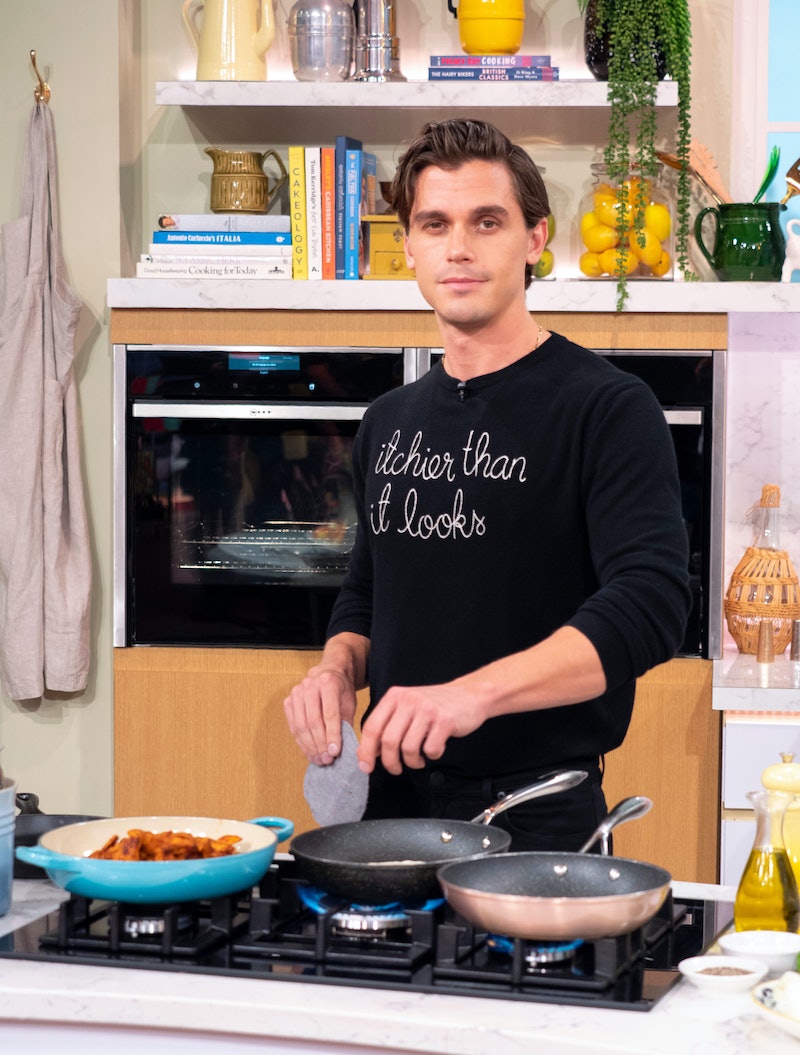 Although, technically, fall is mere weeks away, all signs point to the contrary. Many regions are still in the midst of heat waves, making PSL season and sweater weather feel improbable. That said, the extension of summer could just mean you indulge in your warm-weather foods for a bit longer. And, luckily, Queer Eye's food and wine expert, Antoni Porowski, has a few recipes that'll make the sweet summer vibes going well past Labor Day.

For the Canadian-born chef, summer is synonymous with crisp cold-brew coffee and one of his favorite fruits: the peach. "This is a good year for them," says Porowski in an interview with The Zoe Report (arranged by The Kentucky Derby, which takes place on Sept. 5). "Whether it's a nectarine, a white peach, or a yellow peach. Donut peaches are my favorites, as well."

For a refreshing summer salad, Porowski, says a Grilled Peach and Tomato Salad with Crunchy Almonds (which is one of several recipes the chef has recommended for end-of-summer celebrations like Derby Day, and can be found on the event's official website, as well as the chef's cookbook Antoni in the Kitchen) is the way to go. "It's super simple to make, whether you're making it for yourself or for a socially distant barbecue," he explains. "It's my summer go-to salad, I eat it every day. It's also something that can be easily customized if you don't have access to heirloom tomatoes." The chef adds that you can sub in cherry tomatoes or any other tomato, "just make sure they're nicely ripe." For the peaches, Porowski says a slightly unripened peach is fine, as it will be hitting the grill: "You're gonna be adding a lot of heat, so they'll get caramelized and you don't want them mushy."

Another summer fruit Porowski suggests taking advantage of for end-of-summer festivities (or even just a treat for one), is the watermelon. "I feel like watermelon is often just used as an easy dessert that you really don't have to prepare," he says. "But it's really good paired with savory foods." While the temps are high, Porowski says he prefers his watermelon grilled and tossed in a savory salad. "If you marinate [the watermelon] in olive oil with a lot of fresh cracked pepper and a bit of salt and grilled haloumi, it's the perfect salad."

Porowski also understands that quarantined seasons such as these can sometimes call for homemade meals that feel and taste a bit more indulgent. And what's more decadent than lobster? The sea-faring food is the star of the chef's Herbed Lobster and Saffron Dip. An homage to one of Porowski's favorite French cheeses, Boursin, this dish also includes lobster and saffron and can be served with bread, crackers, or crudités.

And just because the aforementioned summer-centric meals are at top- of-mind now, doesn't mean Porowski isn't looking forward to the colder months ahead. In fact, this fall, the Queer Eye star plans on showing love to an unexpected cooking essential — the crockpot. "What's nice about fall, is that, as soon as the leaves start to change, all I can think about is a stew," says Porowski. "I hated on crockpots for a really long time, but I've changed my tune."

Part of the reason for his change of heart has to do with the tool's ease of use and its ability to work with any and all things in your fridge, says the culinary pro. "If you have leafy greens that are starting to go old a bit or root vegetables you don't know how to cook [a crockpot recipe is ideal]," starts Porowski. "The only thing to remember [when working] with meat is to sear it beforehand. Then, you can just throw it all in."

Yes, a perfect cooking vehicle for even the most culinarily challenged individual, Porowski recommends using slow-cookers to whip up everything from a hearty chili ("it's cheap and cheerful") and beef bourguignon to coq au vin (a whole chicken cooked in a wine sauce).

As for the recipe that's getting him through the current pandemic, Porowski says his tried-and-true meal might surprise many (well, those who don't follow his Instagram account). "The one thing that's been a constant for me these five or six months has been scrambled eggs," says the chef with a laugh. "I can't stop talking about them, because I perfected the recipe."

A fan of the breakfast dish since childhood, Porowski says he used to add extra egg yolks, heavy cream, and cheese "because, when you're a kid, you live a life of no consequence." These days, he goes with a medium-low heated pan with a dab of butter and a 2:1 ratio for the egg and water mixture. "Whisk them up, add salt at the end, and you get the perfect soft scramble," explains Porowski. "It's still runny, but fully cooked through. I just chop up some fresh chives from my sad balcony garden. And, that's what I look forward to every day. I think the saving grace throughout all of this is the rituals of everyday life — enjoying the same thing, and getting it right."