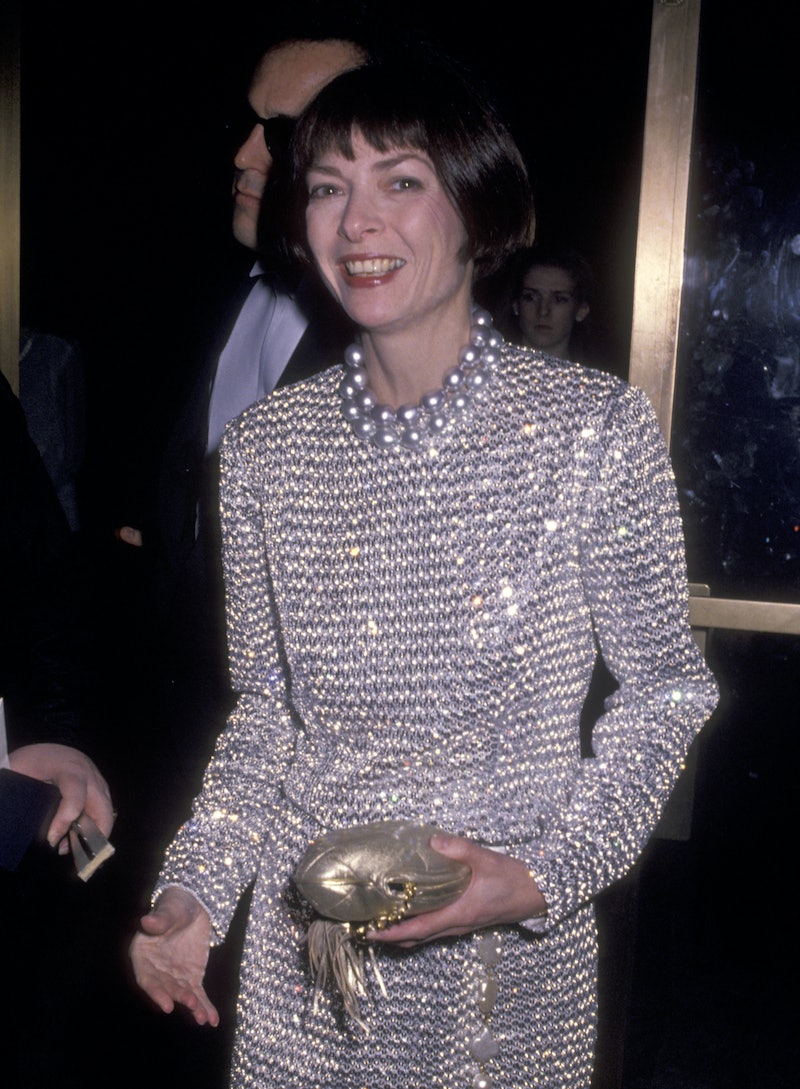 In the music scene, you know legends to be Elvis Presley and The Beatles. And when it comes to sports, Michael Jordan and Babe Ruth are at the top of the list. But in fashion, no one comes close to Anna Wintour. Since the late '80s, Vogue's Editor-In-Chief has set herself apart as an arbiter of fashion's biggest trends. And when it comes to her personal style, Anna Wintour's go-to handbags throughout the decades have always been incredibly chic, and perfectly coordinated with the rest of her look.

While attending fashion shows and swanky events, Wintour has one smart trick that she consistently relies on: always matching her handbag to her ensemble. Wintour's personal style has evolved, from favoring metallics and single-color ensembles in the '80s and '90s to her mastery of mixing prints in recent years. But, from the moment she stepped into the spotlight, the style expert has been photographed holding a bag (usually a clutch) in the same color of a piece in her ensemble. She even takes this a step further by playing with different materials in the same hue, for instance a tan leather trench and coordinating croc-embossed handbag.

As Wintour is known for her devotion to a handful of styles and brands that define her personal aesthetic, it's not all-too surprising to see that she almost always leans on simple clutches. In the early days, Wintour was seen most-often wearing Chanel bags, though over time Prada has come to be a favorite designer as well. Though, it's still unknown exactly what she tucks inside her go-to handbags, her preference for small evening bags alludes to the fact that Wintour keeps things simple.

Ahead, find the EIC's must-have handbags throughout her career. And consider taking a page out of Wintour's book and try matching your clutch to your ensemble, too.

In 1998, Wintour arrived to.a costume exhibit sporting a black and orange ensemble, and completed the look with a chic quilted Chanel crossbody.

Wintour knows a thing or two about wearing flashy pieces. The EIC arrived at the New York City Ballet Spring Gala in 1990 with a shiny, embellished dress. For her bag, she went with a gold metallic clutch detailed with a fringe accent.

Wintour was (and still is to this day) an expert in coordinating colors. For her look at the "Winternight" Benefit in 1991, she finished off a metallic gold and turquoise outfit with a matching Chanel crossbody.

In true Wintour fashion, the EIC matched her hot pink ensemble to her clutch.

In 1995, Wintour took to the red carpet in a John Galliano dress and tiny white purse complete with straps that fit just over the wrist.

The British-born EIC isn't shy about playing with prints and textures. For the PEN American Center Gala in 1997, Wintour was dressed in a cool leopard slip dress and metallic clutch (which both remain on-trend today).

For the Moulin Rouge film premiere at The Paris Theater in 2001, the Vogue editor added some glitz to her getup via a sparkly clutch.

If one thing remained the same through the years, it was Wintour's love for quilted bags. At the Mario Testino Exhibition in 2002, she opted for the style in a black leather clutch from Chanel.

Instead of pairing a clutch in the exact same shade as her attire, Wintour went with a hue a bit darker for the Provocateurs Show in 2002.

For the amfAR Benefit in 2003, Wintour complemented her lavish silk jacket with a sleek blush pink clutch.

Though she was often pictured wearing a plain bag, in 2006 Wintour decided on a logo Louis Vuitton clutch for the Finch & Partners' Pre-BAFTA Party.

During Paris Fashion Week in 2007, Wintour attended an event with a cool circular clutch in hand.

Wintour swapped out her usual neutral clutch for a striking neon yellow iteration for the Gordon Parks Foundation's Celebrating Fashion Awards Gala in 2009.

In 2012, there was a rare sighting of Wintour without a clutch. Alternatively, the EIC finished off an abstract Prada ensemble with a sleek white tote bag.

Leave it to Wintour to teach us all a lesson in matching materials. At the Glamour Women Of The Year Awards in 2014, she paired a luxe tan leather trench coat with a croc-embossed clutch in the same hue.

At the Wimbledon in 2017, Wintour put her go-to clutch to the side and carried a roomy white tote.

In 2019, while Wintour was out and about in Paris, she carried around a trendy brown fur bag.