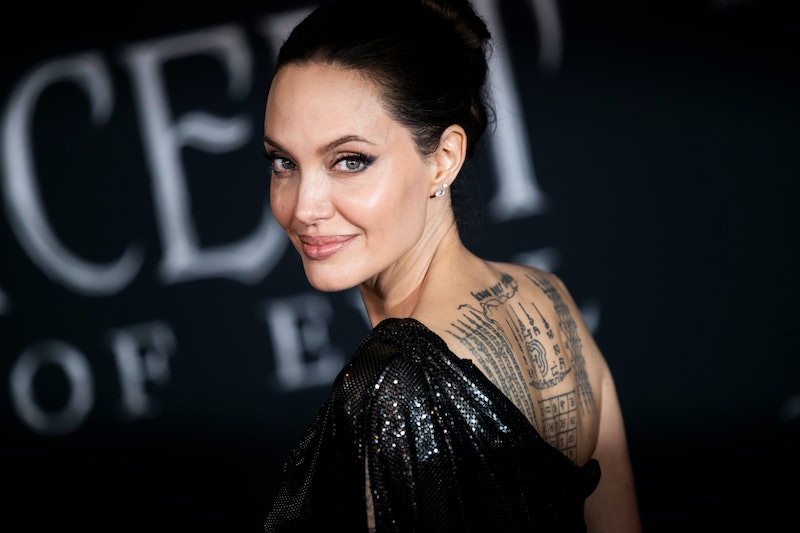 It's a bit of a chicken and the egg dilemma, trying to figure out which came first: Angelina Jolie's beauty look, or how everyone has done their makeup since the '90s. The actor and activist found her sartorial stride that decade, and has inspired fans everywhere to embrace the skinny eyebrow, master cat-eye liner, and skip multi-color eyeshadow looks for something simpler and smokier ever since. (Not to mention her lips, which have undoubtedly inspired a 1,000 lip liner purchases.)

Back in 2014, Angelina Jolie's personal makeup artist, Toni G., shared with Glamour a breakdown of how to master her trademark eyeshadow: "It's important to curl lashes well before starting eye makeup, then use eyeliner on the lower and upper lid, pulling it to meet on the outside corner of eye. The more space in this 'V shape,' the larger and more dramatic the eye will be." Another tip from the pro? "Organic juices and smoothies daily bring a glow to your skin," noted the artist.

But before you hop over to the store for kale and bananas, continue scrolling down. Jolie's trademark beauty look might be simple on the surface, but it includes four key elements that help tie it all together.

Long before less-is-more beauty brands were a twinkle in the collective consumer eye, Jolie frequented red carpets and events with a dewy, natural-looking complexion. A mole here and a freckle there might not seem revolutionary now, but in an era of full-coverage foundation, Jolie's more natural-looking approach was downright rebellious.

Luckily, the fact that it's on trend now means that there are a multitude of ways to approach the look, though mastering your concealer placement and a few dabs from a cushion compact might be the easiest.

Whether she's wearing red, nude, or pink lipstick, Jolie's pout constantly looks supremely moisturized and healthy. Achieve it by sticking with lip formulas that have a dewy, sheeny, or satiny finish, or highlighting your natural lip color with a hydrating balm.

Admittedly, Jolie's brows have become bolder since the '90s, but they're still much slimmer than the Cara Delevingne-style that dominated the 2010s and remains a staple today. That said, there's never been a better time to embrace the skinny brow trend — it's still as statement-making as it was in the '20s and '90s alike.

The final step in the beauty routine: a petite cat-eye that accents Jolie's long lashes. More likely than not, the wing is drawn closer to the artist's lash line, creating the look of shadow and depth on her lids and accenting whichever mascara or lash she's wearing. Eyeshadow is kept at a minimum, as well, giving the eyeliner maximum attention.