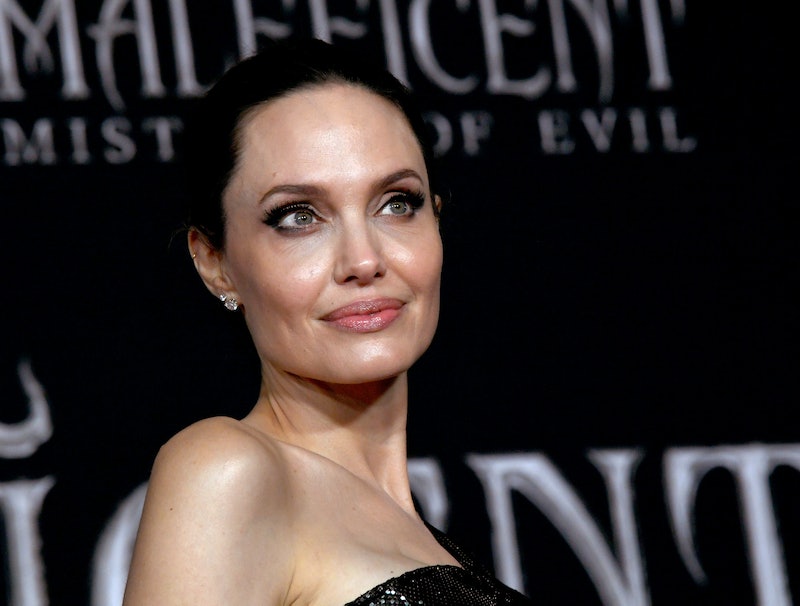 The leading ladies of Disney's forthcoming sequel, Maleficent: Mistress of Evil shut down the red carpet in L.A. on Mon. evening. Elle Fanning, who makes a return as Princess Aurora on Oct. 18 (when the film hits theaters everywhere), looked every bit the, well, princess she is on screen, wearing a flowy green tulle gown that was embellished with gorgeous florals, while Michelle Pfeiffer opted for a red, floor-length gown with a bold, black waist belt. But ultimately, it was Angelina Jolie's Maleficent: Mistress Of Evil premiere look that commanded all the attention.

It's been five years since Maleficent premiered to rave reviews, but on Oct. 18, 2019, Disney fans can finally see how the enchanting story between Fanning's character (Princess Aurora) and Jolie's (Maleficent, the Mistress of All Evil) unfolds in the second installment. Early verdicts reveal this is another must-see, so make sure to pencil a movie night into your schedule for the middle of the month.

Although Fanning's ethereal, fairytale-like gown certainly sparked plenty of buzz (the actor simply can do no wrong when it comes to her red-carpet style), Jolie's dark, witch-y, and perfectly Mistress of All Evil-inspired look proved to be the most talked-about ensemble of Mon. night's premiere.

Jolie is quite notorious for wearing lots of black, both on and off duty — though she does sometimes switch it up with crisp ivory and cream hues, too. As such, it should come as no surprise that the actor glided down the red carpet on Mon. evening in a custom black Atelier Versace gown that was equal parts glamorous and spooky — the perfect way to pay homage to her on-screen role as Maleficent, no?

The actor's chainmail dress, which features a drape-like front and a one-shoulder neckline, was doused in hundreds of black sequins that sparkled with every flashing camera light. It was dramatic in all the right ways, but the real standout detail about the entire ensemble? That diamond-encrusted scorpion brooch sitting on her right hip.

Jolie wore her long, brown locks in an intricate, twisted updo that showed off the dress' elegant neckline (and that iconic back tattoo) perfectly. Her makeup consisted of a subtle smoky eye with an understated wing and a nude lip. Simply stunning!

The 44-year-old wasn't the only one serving up A+ evening looks, though. Jolie attended the premiere with her favorite plus-ones, aka, her children, Pax, Zahara, Shiloh, and twins Vivienne and Knox (Maddox was unable to be there), all of whom were also dressed to the nines. Looks like good style runs in the family.

Channel Jolie's latest evening look with The Zoe Report's favorite sequin gowns. Shop them all, below.