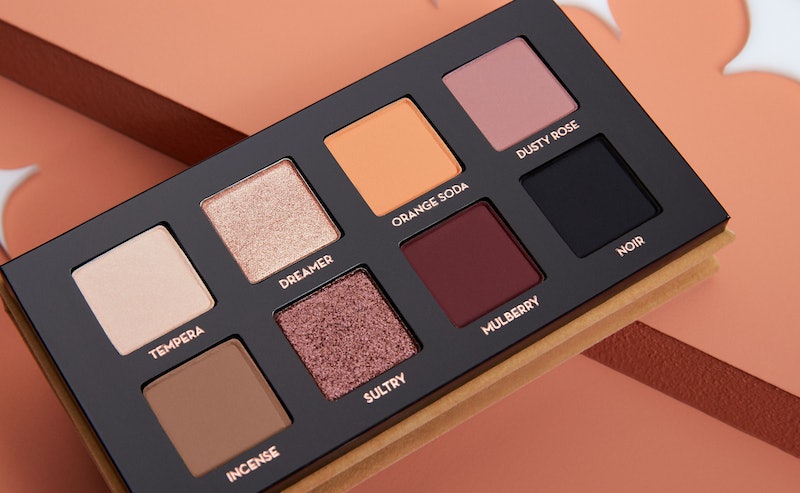 I discovered the wonderful world of eyeshadow palettes shortly after the mid-2010s makeup boom. Back then, putting on eyeshadow wasn't a solo venture; it was followed up with brows, contour, liquid lipstick, and false lashes. I don't need to tell you that makeup has changed in the last few years, a shift that occurred even before the pandemic. I thought about this as I dipped into the new Anastasia Beverly Hills Soft Glam II to review, an eight-pan mini palette that arrived on Oct. 5 alongside a wave of other holiday launches. In a world where no-makeup makeup has become the gold standard, and only the occasional socially distanced outdoor rendezvous calls for full glam, what does it take for a new palette launch to succeed?

Soft glam, apparently. The $29 Soft Glam II palette features six shades from the original Soft Glam Eyeshadow Palette (Tempera, Orange Soda, Dusty Rose, Sultry, Mulberry, and Noir) alongside two from the Norvina Eyeshadow Palette (Dreamer and Incense). The result is a mix of warm tones and blendable neutrals that span across matte, satin, and ultra-sparkly metallic finishes. Saying that the Soft Glam II iteration is ideal for fall is an understatement — just swiping on a layer of Orange Soda as your base instantly adds a pumpkin spice tinge to any look.

Which is where I started. I built up Orange Soda across my lid and into my brow bone, skipping eyeshadow primer entirely. And brows. And mascara. I wanted to see how Soft Glam II worked all on its own, since makeup these days is so incredibly minimal. (At least, in appearance. We all know that "effortless" beauty does, in fact, require effort.)

I deepened the corners of my orange-beige base with a dash of Incense, an easy-to-build milk chocolate, and finished by patting on the metallic brown Sultry across my entire lid and into the crease — a shade that's well worth the $29 palette price all on its own, in my opinion. I didn't fuss with perfecting my blending, only cleaning up the tiny amount of fallout Sultry left behind.

The verdict: Soft Glam II excels as an everyday eyeshadow palette. It requires very little effort, and can be popped on to create depth and sparkle in the five minutes before a video call. If you have even more time — or want to put in more effort — you certainly could; the metallics and deep black are building blocks for show-stopping, night-on-the-town full glam.

Until then, I'll be sticking with soft. Below, the new Soft Glam II Mini Eyeshadow Palette from Anastasia Beverly Hills.