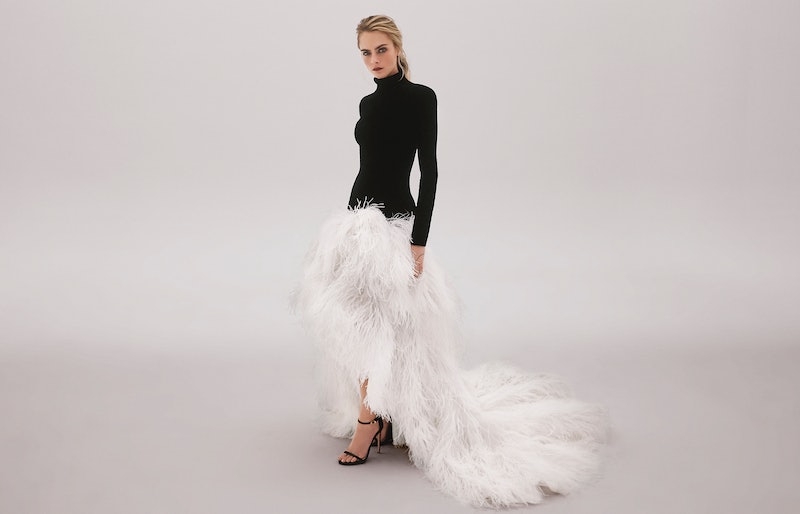 By now, there are few industries that Amazon hasn't left a lasting imprint on. The commerce giant has, historically, occupied a certain place in the fashion market — with jewelry, activewear and shoes famously punctuating its offering. Now, the stockist is making a long-awaited foray into luxury fashion, and it's bringing its innovative edge with it. Today, Amazon launches 'Luxury Stores' — a premier, in-app marketplace that allows U.S. shoppers to access high fashion houses and beauty brands like never before. To sweeten the deal, they've brought on a New York-based fashion label and a fabled model for the launch, both of whom are well-worth shouting about.

On Sep. 15, Amazon officially announced the venture, enlisting Oscar de la Renta as its inaugural label. On an invite-only basis, U.S. based Amazon Prime users will be granted early access to ODLR's Fall/Winter 2020 collection, in addition to previous seasons. While inside, shoppers have the ability explore each garment in several different sizes, all through a 360-degree view so that each user can better visualize their own fit.

Of many pandemic-inspired changes to fashion and retail, chief among them all was the detriment to boutiques and department stores, who heavily rely upon foot traffic to stay afloat. With a temporary hold placed on in-store experiences, many are still opting to limit their outward ventures and doing their shopping from home instead. Amazon's Luxury Stores offer a promising alternative — empowering shoppers to secure that "dream fit" without leaving the house.

The app launched with a video campaign, which depicted the model Cara Delevingne's imagination roaming free while using the app. With the various modes of viewing each look, the platform allows her to truly picture herself in each design — envisioning herself across a series of fantastical settings, all in Oscar's decadent dresses.

While the forthcoming brands are unknown at this time, the e-tailer has confirmed that a mix of emerging and well-established labels will be joining the fold, so excitement is mounting for their arrival. More information there will arrive in the coming weeks. For now, be sure to download the Amazon mobile app, and request an invitation to Luxury Stores to join the waitlist.