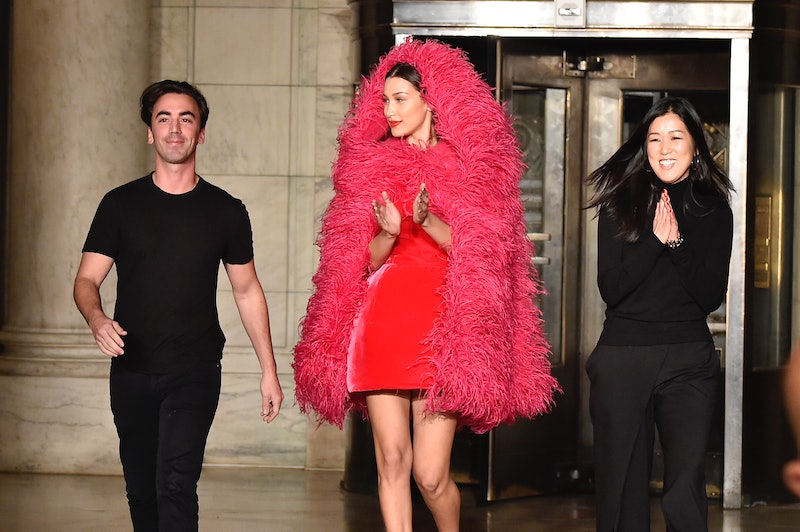 A mere 24 hours after Scarlett Johansson walked the Oscars red carpet in custom Oscar de la Renta, the label assembled its own A-list event. As the rain poured down, showgoers walked their way into the iconic New York Public Library and sat to take in the latest designs of Laura Kim and Fernando Garcia, the duo who have fronted the label since 2016. Oscar de la Renta's Fall/ Winter 2020 collection may have shown on a Monday night, but its sentiment was about celebrating not staying in.

The show opened with Bella Hadid in color-clashing separates, and finished with the model of the moment in a red velvet mini dress with a hooded feather cape to match, two looks that presented extremes in elegant dressing. In between, there were plenty of the labels' signature celeb-worthy styles: most notably high-volume gowns in a range of colors and textures — moire, velvet, and sequins included.

Though it was easy to imagine any of the pieces appearing on the season's next red carpet extravaganza, the runway collection was inspired by Geothe's poem The Sorcerer's Apprentice and Truman Capote's Black and White Ball, a masquerade hosted by the author in 1966 at the iconic Plaza Hotel (the event was attended by de la Renta himself). It may seem an odd marriage, but the combination is a nod to the design duo's ability to honor the house's past while cutting, sewing, and recreate the works of their own sorcerer. You could see the nods in the prevalent bubble hems, the high necklines, and even the graphic jacquard prints. These outfits were destined for a party — or perhaps a red carpet that feels like one.

While the collection's outerwear and separates are pieces that are sure to keep the brand's loyal customers coming back for more, it's in the breakout black tie pieces where the brand shines this season. In a constantly narrowing field — at least in New York — de la Renta represents the glamour of America's golden age, and Garcia and Kim do well embracing that playful (yet elegant) aesthetic mastered by their predecessor. To add to the magic felt throughout the collection, the duo even turned to Disney, referencing Fantasia — another appearance of the apprentice — as another point of inspiration, and receiving permission to use art from the film.

Though the Oscars mark the end to the gamut of major red carpets that kick off the year, between now and fall, you can expect that a handful or more of the collection's most eye-catching pieces will appear in front of a step and repeat. In fact, unsurprisingly, Johansson's corseted dress (or at least the slightly remixed siblings to it) made it down the runway already pushing the strapless style to top contender for a repeat. Apprentice or master, whoever it is dressing the ODLR woman, this season they're sending her out the door fête ready.