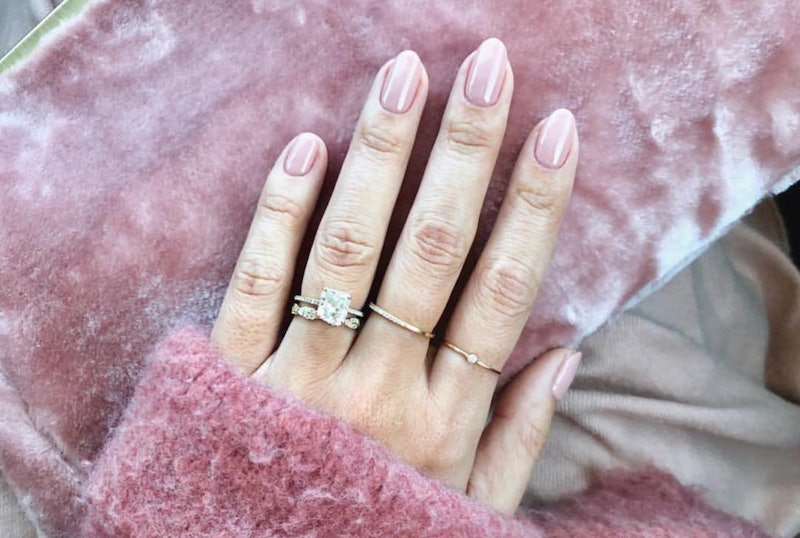 Nail trends come and go: Square-tipped acrylics made it big in the early-aughts; fourth finger nail art was huge a few years back, and painting each finger a different nail color was a short-lived 2018 trend. But there is one recent style that feels like it’s here ‘til death do us part: engagement nail polish. You’ve likely seen the trend in action on your Instagram feed — there are tens of thousands of photos tagged with #engagementnails alone, almost all featuring a fresh manicure, usually in a soft neutral or blush pink, and upstaged only by a gorgeous, glittering rock (and maybe a slew of #isaidyes-related hashtags).

“Ever since technology came into play within the nail space, we’ve seen a steady climb of manicure photos via social media,” Michelle Saunders, a celebrity manicurist who’s worked with everyone from Oprah to Paris Jackson, tells The Zoe Report. “People are constantly looking for desirable content, and there isn’t anything more beautiful than a perfect manicure to display a gorgeous engagement ring.”

While that does ring true (see what I did there?), there’s definitely another reason for the rise of the proposal mani — and that’s a healthy dose of equality. “I think that in this day and age, engagements are a decision made by both parties in a relationship, not just [someone] deciding that [they're] ready to ‘pop the question,’” Mazz Hanna, a nail artist who works with Julia Roberts and heads up her namesake nail care company, tells us. “Because of this, I think women have a general sense of when a ring is headed their way and want to be prepared with a fab mani.”

Most would agree that a pre-proposal manicure isn't a bad idea, especially if you've already discussed getting engaged with your partner. But what happens when you’re not prepared — at least not in the moment? In the case of Jose Borje and his fiancé Diana Le — whose engagement story recently went beyond viral — a staged photo was in order. “Prior to the proposal, Diana would jokingly remind me to ensure that she got her nails done whenever the topic of proposing came up,” Borje tells The Zoe Report. “But I couldn't really hint to her to get them done without raising suspicion, as I wanted the proposal to be a big surprise.” In the moment, Le was hesitant to take pictures due to her lack of polish — so her cousin Jenna Nguyen stepped in to save the day with a fresh red mani. “We considered quickly painting her nails but in the excitement of the moment, we couldn’t wait so l suggested using my hand instead,” Nguyen shares. The resulting images, a crop of Borje and Le kissing, with Nguyen’s ring-ladden hand front and center (and Nguyen herself crouching out of frame like a champ), are arguably way more memorable than any mani she could’ve had.

In fact, this scenario may be more common than the perfectly polished proposal nails of Instagram would have you believe. “I was going away for the weekend up to San Jose with my then-boyfriend, and I remember him actually asking if I was going to do my nails,” Victoria Menichetti tells TZR. “I didn't think anything of it until he got down on one knee and asked if I would marry him!” Menichetti admits her first thought — other than, you know, yes — was, “Damnit, I didn't paint my nails.” Her fiancé had a fun solution: The couple immediately went to a nail salon, he picked out her polish (hot pink), and they went on to “take more pictures and post on Instagram, Facebook, and Snapchat,” Menichetti tells us.

Across the country, it seems partners are becoming increasingly more involved in the engagement nails phenomenon. “In the salon, we often hear the significant other booking a manicure for their soon-to-be fiancé so that the nails are ready during the proposal,” Sigourney B. Nunez, a nail artist and educator with OPI, tells The Zoe Report. “The attention to detail is so sweet and extremely thoughtful.”

That being said, it’s probably a safer bet to take the engagement mani planning into your own hands. “If you have an intuition that a proposal is coming, make sure your nails are done regularly,” Saunders says.

“The perfect engagement mani is one that is kept simple and clean, with a nude shade or a pretty pink, something that highlights the beauty of your engagement ring,” Deborah Lippmann, the co-founder and creative director of her eponymous brand, tells The Zoe Report. However, don’t dismiss nail art. “That’s on the rise right now, especially for young brides opting for stones, glitter, and marbles designs, which can look beautiful as long as they’re not overpowering,” Lippmann says. "You don’t want it to steal focus.”

No matter what color or design you choose, just make sure that your cuticles are moisturized and manicured, Hanna says. To that point, she suggests keeping her Amethyst Cuticle Oil nearby.

Of course, there’s no reason for #engagementnails to stop at the engagement. “My engagement ring has a pink sapphire at the center,” Annika Benitz Chaloff, the founder of handmade lingerie company Hey Mavens, tells The Zoe Report. When her now-husband proposed, she was sporting a self-professed “dorky” manicure consisting of DIY balloon nail art to celebrate her mom’s birthday, which she hid in photos — but afterwards, matching her nail art to her ring became an obsession. “I loved getting manicures with an accent nail on my ring fingers just to draw more attention to the fact that I was now engaged,” she says. While the design expert suggests you err on the side of neutral when it comes to proposal polish, she also advocates for bold colors and fun shapes. After all, as she’s learned, “You'll be wearing this ring for a long time, so there’s no reason to throw away your own personal style.”

Ahead, eight proposal-worthy polish shades perfect for the big day and beyond — no matter your personal style.

This off-white shade from OPI “lasts up to three weeks, so you can meet your mani needs,” Nunez tells us.

“For the simple, minimalistic bride, I would recommend Fashion,” Lippmann says.

“It’s 2018 and Instagram culture has made it imperative to have beautifully manicured nails to get the perfect engagement ring selfie,” Lippmann tells The Zoe Report, citing Love at First Sight as the ultimate soft pink shade.

“I was lucky enough to know the best nude/pink color that looked best on me, Essie’s Young, Wild, & Me,” Saunders shares. “So whenever there was a celebration, I had it ready to apply!”

“Specialized manicures can really elevate your engagement or wedding look and add a small personal touch,” Lippmann says. “Who doesn’t want to look their best on their wedding day?” To add a touch of sparkle to your nails, opt for Deborah Lippmann’s neutral-but-noticeable Stargasm.

"If you’re someone who loves glitter, a little extra sparkle never hurt anyone," Hanna says. And what better way to set your love in stone than with Essie’s glittering Set In Stones polish?

“For someone who loves a more bold look, try My Old Flame,” Lippmann suggests.

“For the shape, I always love a narrow almond shape so that will elongate your fingers to make that ring pop,” Nunez says. A diamond ring is also sure to pop against OPI’s Magala Wine, a deep oxblood red.

"It wasn't just the nails — I was a bit hesitant to expose the current condition of my hands during that time," Le says of her viral proposal. "Ladies, moisturizer is a must for your hands!"

“The amethyst infused cuticle oil is the first product I created, and it remains one of the most popular,” Hanna says. “It includes four simple ingredients that give cuticles and intense dose of moisture and promote nail growth and health. The rollerball is made with a Brazilian amethyst which can aid in fighting the urge to pick or bite nails and cuticles.”