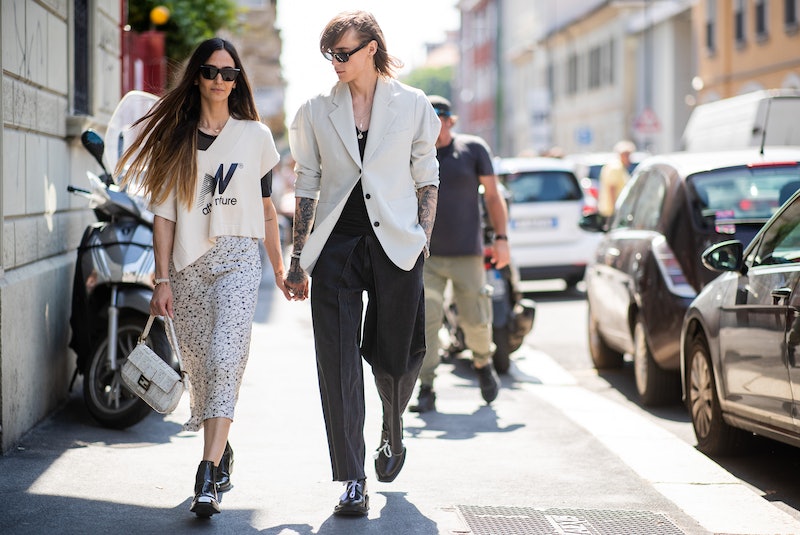 There’s something so invigorating and exciting about a new relationship. The butterflies, those initial conversations that you just don’t want to end, and, most importantly, the hope that it will turn into something truly extraordinary. However, so often, that hope can morph into unrealistic expectations in your relationship that are just impossible for your partner to meet. Consequently, said expectations can lead to disappointment, conflict, and, in some cases, a breakup.

So at what point does one cross the line from reasonable to unreasonable? Unfortunately there’s no concrete answer to that. However, if you find yourself quickly and consistently unsatisfied in your relationships, that might be a clue to get to the root of things. “Get curious and reflect on where you learned that mindset to begin with,” suggests Christene Lozano, licensed marriage and family therapist, specializing in sex and relationships, and the founder of Meraki Counseling in San Dimas, California. “Was it from a parent/guardian, TV/movies? When do you remember first having that mindset? In what ways do you believe that mindset is protecting you from being hurt? In what ways has that mindset kept you from leaning into some discomfort, having long-term healthy relationships?”

Consulting with a professional therapist or relationship coach is always a great way to pinpoint some of these unrealistic expectations and help guide you to a healthier mindset. But, for the sake of streamlining things a bit and giving you an example of what some unreasonable tracks of thinking might be, a couple relationship experts were tapped to help identify some of the most common unrealistic expectations that that they’ve encountered throughout their careers.

Expectation #1: Your Partner Will Always Be The Exact Person You Met

“I hear couples often complain that their partner has changed,” says Lozano. “While it’s understandable to be concerned about someone not being the same person you knew when you first began dating, it would also be concerning if the person didn’t change to some degree.”

Relationship coach and founder of Couples Retreat, Tina Konkin says, this unrealistic thinking that your partner will never change is often debunked after marriage. “Some spouses really believe that the person they fell in love with are not the people they now live with,” she says. “That's when expectation of who you thought they were meets reality of who they are. We do our best to not show our flaws or even recognize them ourselves.”

Lozano explains that it’s healthy to grow and evolve. And while one always wants the things that made them fall in love with their partner to remain in tact, growing as individuals is vital for personal development. “It’s a matter of being able to move together through all the beautiful and awfully messy stages of life,” says Lozano. “Growing together. Making an intentional choice to continue choosing your partner.”

Expectation #2: You Express And Receive Love The Same

“Another common unrealistic expectation I’ve seen couples place on each other is that their partner expresses and receives love the same way they do,” says Lozano. The therapist goes on to explain that there are various key ways people express love: words of affirmation, quality time, acts of service, physical touch, and gifts. “Partners might be trying to express their love to one another but speaking different languages, so to speak,” she adds. “Learn your own language, learn your partner’s language.”

Not sure what that language might be? For starters, you can have your partner take an actual love language quiz. You can also just ask them, what they’re most receptive to, and how they typically express love and appreciation for people. This, in turn, will tell you how they want love expressed to them.

In the beginning stages of relationships — the honeymoon phase if you will — it can seem like you’ll be floating on a cloud of serenity forever … until you're not. At a certain point, reality sets in, as do your partner’s flaws, which will inevitably come to the surface (along with yours!). This does not mean you’re not meant to be or that your partner is not the one for you. It just means you’re both human.

“Expect that you and your significant other will have arguments,” says Lozano. “It’s not a matter of if, it’s a matter of when. Sorry to break the news to you folks who are inclined to avoid conflict and not want to rock the boat.” The relationship guru stresses that arguments are a natural part of being together. “In fact, if you’re having zero disagreements or arguments, that might mean there are some things that aren’t being spoken about or shared,” she adds. “You’ll have different opinions about things, and that’s okay. What is important is fighting fairly, which can be done assertively and respectfully. Being able to repair and recover after disagreements is huge.”

Expectation #4: They Do Things The Way You Do Things (And If They Don’t, They Should)

Those who share a space (or have even spent a significant amount of time under one roof) with their partner might be familiar with this little train of thought. One often assumes they will naturally do life and even the most mundane things just like their partner or that your little differences won’t even be noticeable or bothersome. While in some cases, you might get lucky and this might be true, it’s not likely.

“Don't expect your spouse to replicate how you think things should be done, like squeezing the toothpaste from the bottom (which in my opinion is the right way, haha) or toilet paper over or under,” says Konkin. “Be reasonable and consider that sometimes being right doesn't produce being happy.”

This is where little things called patience and compromise plays a big role. Accepting your differences and being flexible in your day-to-day routines could be a game changer. “Reality is being reasonable with your expectations,” says Konkin. “It might be accepting that different is not wrong. Expect delays, disappointments, hurts, to be annoyed, and agree to disagree at times.”