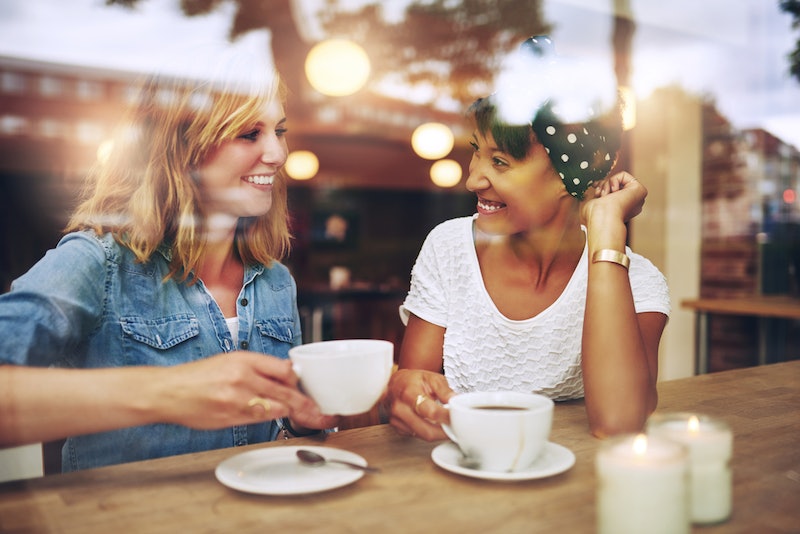 At one point or another, everyone has shown signs of the dreaded people-pleasing syndrome. While it can be difficult to pinpoint the exact moments where you may have over-extended yourself to ensure the happiness of those around you, there are definitely key signs — some more subtle than others.

At first glance, the word "syndrome' can be alarming, and to some, it might even seem like an exaggeration. Maybe you’re just an exceptionally kind person, maybe you genuinely enjoy going the extra mile, or maybe you’re admittedly an over-achiever and there’s no cause for concern. That's great! However, in most cases, seemingly common people-pleasing patterns can have a deeper meaning that’s worth exploring for the sake of your mental health.

A 2016 study revealed that people-pleasers — or those prone to excessively agreeing with others — did so as a defense mechanism to avoid mental stress. The interesting thing about this, though, is that the repercussions of this behavior can lead to just that. The danger of said patterns (which can also include excessively apologizing or saying yes to things you really don't want to do) is that you consistently cancel out or ignore your own feelings and needs. Do this long enough and a fun little thing called resentment can eventually build and lead to either a blow up of epic proportions or an abrupt disconnect from your relationships, both romantic and otherwise. Both options are equally unappealing, right?

In an effort to shed more light on how this can affect both you and your relationships and, more importantly, how to start reversing learned habits, experts were tapped to discuss the top three people-pleasing habits plaguing society right now.

Seeking Validation From Others

If you’re constantly seeking the approval of others or using other people’s opinions of you as a gauge for your own self-worth, the root of this could actually be people-pleasing syndrome. Tracy Litt, certified mindset coach, transformational therapist, and founder of The Litt Factor, says, “At the core of it, the function of chronic people-pleasing is this: You aim to please because you get approval, you receive praise, you are validated, you feel included, you feel needed, you feel well-liked. You please in an effort to feel like you are good enough.”

Now, this idea can also manifest itself in excessive apologizing or use of terms like, "does that make sense?" which seek validation from external sources. The truth is, while it can be rewarding to receive positive feedback, it’s not up to other people to constantly give you praise and recognition. In fact, oftentimes, the onus is put on others to do this, when in reality, it should be put on yourself. Whether you delivered a flawless presentation at work or pushed yourself to make it to a workout class you normally skip, noticing and appreciating your own victories, big or small, can play an integral role in shedding this unhealthy — and often overlooked — behavior.

In the same vein, being more confident in your statements and trying to leave out unnecessary statements — like the aforementioned — that prove you need external approval is important, as well. "Through the work of loving yourself and cultivating a phenomenal relationship with yourself, you start to see that you are your own approval," Litt says. "You are your own validation. From this space, you free yourself from the need to people please.”

Saying Yes When You Really Want to Say No

Have you ever said yes to something — like drinks with a colleague you dislike or a meeting that you know you don’t have time for (or really need to attend) — when you really wanted to say no?

“Pleasing people is more than just doing helpful things for others; most people don’t realize that it can also include repeatedly going out to places or participating in activities you do not enjoy,” says Matthew Verdun, LMFT.

While it’s one thing to bite the bullet and compromise on things once in awhile, it becomes a bigger issue when you repeatedly give in. By putting unrealistic expectations on yourself to do things you intuitively know you don’t want to do, you end up prioritizing the needs and wants of others over your own. Over time, your relationships may start to feel the damaging effects.

“You begin to internalize your frustration and the constant feeling of pressure to say ‘yes’, which can make you either less fun to be around, angry, detached — or, in some cases, can cause you to completely withdraw from the relationship,” Verdun advises.

It might be uncomfortable at first, but actively working to change your knee-jerk “yes” response can go a long way. There’s nothing wrong with suggesting another meeting spot to your friend or politely declining an invitation if your schedule doesn’t allow for it.

According to NYC-based licensed psychologist Dr. Chloe Carmichael, setting these types of boundaries and learning to say no is one of the most important things one can do to maintain the health of their relationships.

“When you make decisions that are best for you, they're actually best for other people, too, because you’re showing you value the relationship by being honest in your communication,” Carmichael says.

People-pleasing is not only about repeatedly saying yes — but also about all of the things you don’t say or do in order to avoid conflict. Perhaps this poses a more complex question: Why do women (even the most secure, confident women) sometimes struggle to say what they actually mean, apologize for things that are out of their control, and/or feel the need to silence themselves for the sake of appeasing those around them?

By perpetuating this passive, people-pleasing disposition, it can be easy to get stuck in the same detrimental loop. So, how can you be more straightforward, more assertive, and more of your authentic self? Subscribe to your own needs and goals, always. Take it from Litt: "As soon as you say, ‘I’m no longer available for this,’ and start making new choices that change the habit, the most magical thing happens — you give permission to other people around you to change the habit as well."