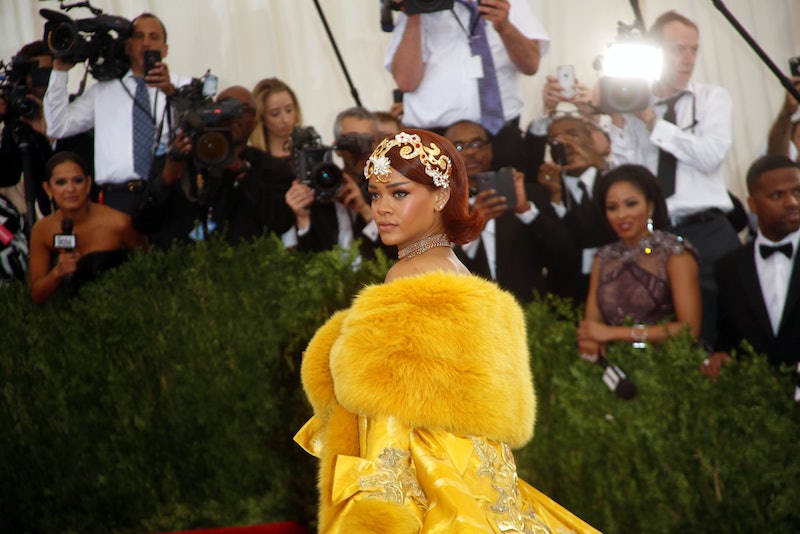 As everyone navigates working from home, it is probable streaming services are being utilized like never before. Shows you've been meaning to check out and catch up on are finally popping up on your screen — and being finished in a matter of days. So if you're already in need of some refreshing visual content to get you through this couch-ridden time, it might be worth going the fashion route. Yes, there are a number of fashion shows available to stream that'll lend some inspiration (and possibly lift your spirits) while you lay low.

Need some compensation to make up for the fact that this year's Met Gala event has been postponed? Head to Netflix and binge 2016's The First Monday In May. Or maybe you want a behind-the-scenes perspective of your favorite red-carpet fashion moments? Netflix comes to the rescue again with docu-series Styling Hollywood, which chronicles the day-to-day happenings of celebrity stylist Jason Bolden (who styles everyone from Cynthia Erivo to Alicia Keys).

Or maybe you have a taste for some healthy fashion-focused competition. If you haven't already, now is the perfect time to get into RuPaul's Drag Race (available on Hulu) and see for yourself why the Emmy-winning show is such a crowd-pleaser among the fashion set — and everyone else for that matter. Another fashion design competition getting major buzz is Next In Fashion, the new Netflix show hosted by Alexa Chung and Tan France.

Ready to give your true crime documentaries and nostalgic movies a rest for a bit? Ahead, 13 fashion-centric shows to stream while you practice social distancing.

The Emmy-winning competition show that aims to crown America's next Drag Queen Superstar is now in its 12th season, which means you have plenty to catch up on.

Next In Fashion (Netflix)

This new competition series aims to discover the next fashion icon via various design challenges, judged and hosted by Alexa Chung, Tan France as well as various guest judges.

Ever wanted a glimpse of the life of a celebrity stylist? Styling Hollywood offers you just that, following Jason Bolden as he navigates award season as the premiere stylist to Taraji P. Henson and Yara Shahidi (to name a few).

Follow the Fab Five around the country as they spread their advice in fashion, beauty, and life in general to those looking for a little life revamp.

Premiering on March 27, this new fashion competition show, shows budding designers how to navigate all aspects of the cut-throat industry, with Project Runway alums Heidi Klum and Tim Gunn leading the helm as hosts.

Another classic fashion show to binge if you haven't already, Project Runway is in its 18th season, which means there's plenty of style inspiration to glean.

Get the real story on fashion icon Jeremy Scott and how we went from living on a Missouri farm to serving as creative director of Moschino.

Kevyn Aucoin: Beauty & the Beast In Me (Netflix)

Makeup legend Kevyn Aucoin worked on some of the most famous faces in the world. This doc includes never-before-seen footage, archival videos, and celebrity interviews to provide insight into the life, career, and legacy of the well-known artist.

Manolo: The Boy Who Made Shoes for Lizards (Netflix)

A documentary filmmaker turns his lens to his mother in this interesting documentary chronicling the life of Italian Vogue editor Franca Sozzani.

The First Monday In May (Netflix)

Despite its postponement, your Met Gala dreams can live on in this in-depth documentary on the 2016 event.

Sex And The City

While not a fashion show, one can't deny the impact this HBO series has had on the industry. Why not relive the magic?