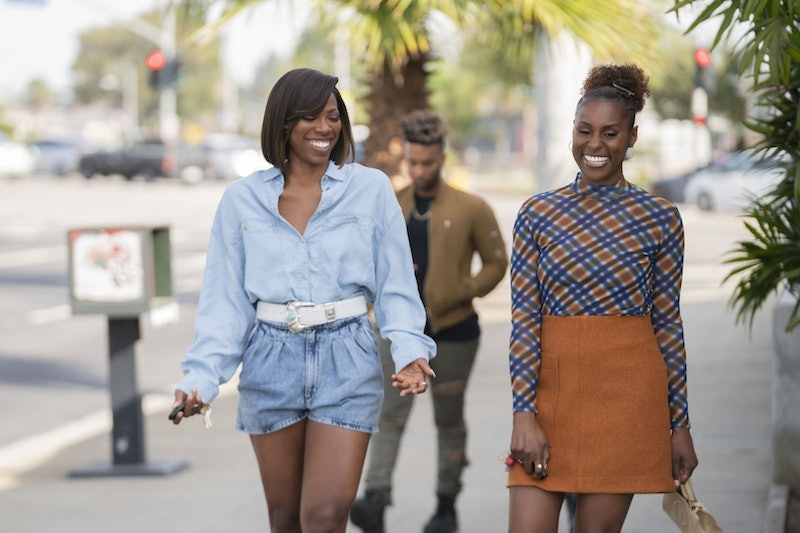 The announcement of the nominees for the 72nd Primetime Emmy Awards couldn't have come at a better time. With many still confined to their homes for much of the summer, it's possible, at this point in the quarantine season, that you've watched a good amount of TV. But, like a breath of fresh air, the confirming of this year's Emmy-nominated shows could provide some inspiration for what to watch or re-watch in the coming weeks, no matter what you're in the mood for.

In need of a good laugh right now? 'Tis the perfect time to binge HBO hit comedy Insecure, which chronicles the life of besties Issa and Molly (played by Issa Rae and Yvonne Orji respectively) as they navigate dating, breakups, career moves, and all the awkward moments in-between. Or maybe a bit darker with Netflix original Dead To Me, which features Christina Applegate as a hotheaded widow searching for the hit-and-run driver who killed her husband.

If a good drama is more your style, HBO show Succession is a great watch. The series centers on the Roy family, the dysfunctional owners of a global media and hospitality empire, who are fighting for control of the company amid the ongoing health issues of the family's patriarch, Logan Roy (played by Brian Cox). For lovers of all things British, The Crown is ideal. The period drama follows the life of Queen Elizabeth, from her early days as young queen and new wife to the present day matriarch she's known as now.

Also, not to be missed are the limited series programs that have popped up. The star-studded Little Fires Everywhere is a must for fans of Reese Witherspoon and Kerry Washington, while Watchmen is great for superhero and comic book enthusiasts.

To help you get your updated binge list ready for the weeks ahead, below 12 Emmy-nominated shows — for your consideration.

Nominated for Outstanding Lead Actress in a Comedy Series and Outstanding Comedy Series, Insecure is the creation of Issa Rae, who based the show partly on her breakout web series Awkward Black Girl. The comedy series follows two Black women who are best friends as they navigate the pitfalls of their personal and professional lives in south Los Angeles. Because Insecure is in its fourth season, that means there's plenty of laughs and awkward moments to soak up.

2020 Emmy Nominated Shows: Dead To Me

With its two leading ladies — Christina Applegate and Linda Cardellini — up for the Outstanding Lead Actress in a Comedy Series, it's clear Dead To Me is chock-full of great talent. The Outstanding Comedy Series nominee has been a runaway hit, loved for its dark comedic approach to difficult subject matter like death and grief.

While it's likely you've heard of and watched this period comedy about a dissatisfied '50s housewife-turned-standup-comedian, it's definitely worth another binge. Nominated for Outstanding comedy series and Outstanding Lead Actress in a Comedy Series for its star Rachel Brosnahan, The Marvelous Mrs. Maisel has it all: fashion, humor, and strong female leads.

If you follow Buckingham Palace's Instagram diligently, it's highly likely you watch The Crown, which tells the story of the current Queen Elizabeth's long reign as royal matriarch of England. However, with news of the show's recent Emmy nominations, including Outstanding Lead Actress in a Drama Series (Olivia Coleman) and Outstanding Drama Series, it might be worth another watch.

HBO hit Succession is an absolute must for those who haven't yet made themselves familiar with the Roy family and all their dysfunctional, narcissistic, power-hungry drama. The show's Emmy nods include Outstanding Drama Series and Outstanding Lead Actor in a Drama Series (Brian Cox).

At this point, Killing Eve has put itself on the fashion map for its stunning ensembles (who can forget the pink Molly Goddard gown worn by Jodie Comer's character Villanelle in Season 1?). But considering the show's nods for Outstanding Lead Actress in a Drama Series (Jodie Comer and Sandra Oh) and Outstanding Drama Series, it's clear the plot and acting are somethings to behold as well.

Arguably one of the most discussed shows of the year, it's no surprise Little Fires Everywhere (based on the best-selling novel by Celeste Ng) got a nomination Outstanding Limited Series. The Hulu drama stars mega-stars Reese Witherspoon and Kerry Washington as mothers from different socio-economic backgrounds raising children in suburban Ohio.

Regina Kings stars — and shines — in this superhero thriller, that's nominated for Outstanding Limited Series. The show focuses on events surrounding racist violence in present day Tulsa, Oklahoma and the journey of Angela Abar (King), a detective known as Sister Night, as she investigates the murder of her friend and chief of the police.

This FX historical drama (nominated for Outstanding Limited Series and Outstanding Writing) details the political movement to pass the Equal Rights Amendment and the unexpected backlash led by conservative activist Phyllis Schlafly (played by Cate Blanchett) in the 1970s.

Based on the 2015 news article "An Unbelievable Story of Rape," written by T. Christian Miller and Ken Armstrong, this powerful series follows Marie, a teenager who was charged with lying about having been raped, and the two detectives who pursued the truth. While a disturbing watch, the show is incredibly impactful and features incredible performances by Toni Colette, Merritt Wever, and Kaitlyn Dever.