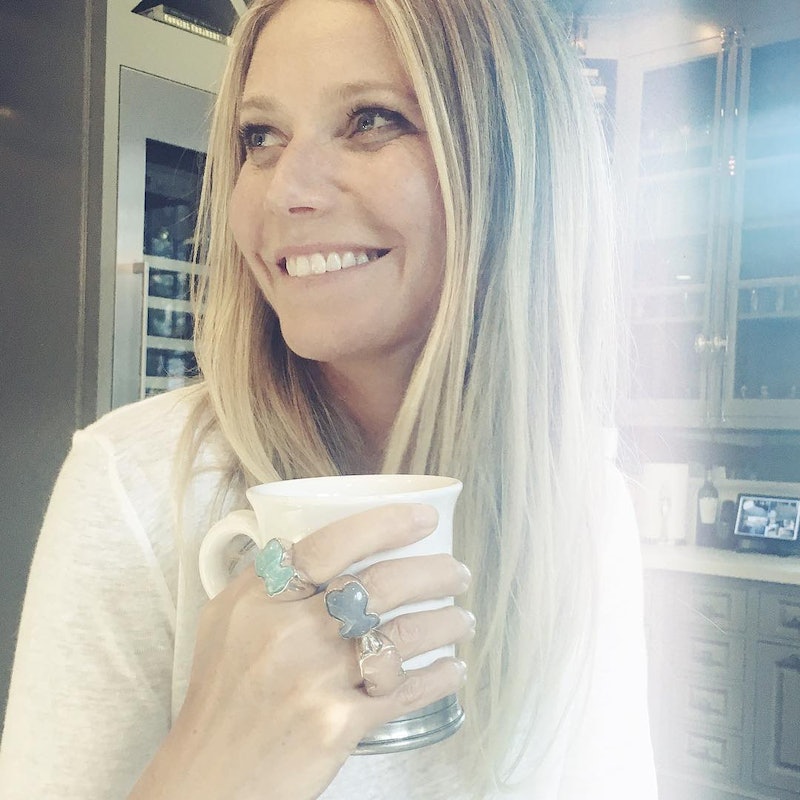 Somehow, we’ve found ourselves back in “real life” already, and no reality is more brutal than January except what is known as Dry January, or the 31 days without alcohol that directly follow months of overindulging (aka, actually enjoying life). If you’re among those attempting to stay sober for the duration and feeling anxious about how to take the edge off post-workday without hitting the sauce, we’d like to help. Here, the successful gal’s guide to starting 2017 booze-free.

Your Guide To A Month Of Sobriety

If you have a significant other, it's basically essential they commit to drying out with you if you have any hope of success. If you're single, we suggest enlisting a friend (whose company you actually enjoy, sober, in large doses) to try Dryuary with you. This person will be your go-to activity buddy so you don't end up alone at home eating Häagen-Dazs for the rest of the month.

This is a critical step. If you don't complete it, you'll definitely decide you can have "just one glass" somewhere along the way, at which point the seal will be broken and you'll no longer feel committed to the cause.

Those who give up alcohol forever must learn to socialize in normal situations without it; however, we'd like to posit that socializing sober is, in many instances, too advanced for newbies to the dry lifestyle, and attempts to do so may end in impaling yourself on a Grey Goose bottle, impaling someone you thought you liked on a Grey Goose bottle or (most likely) drinking. Avoid this fate by steering clear of situations in which you normally drink. Turn happy hours into buddy workouts or hikes. Visit the local museums you pretend to frequent but to which you've never actually been. See movies or live theater. Sign up for a cooking class (or any class). A calendar stacked with activities will keep you feeling busy and fulfilled despite the lack of booze-related socializing.

You know that project you've been putting off for, like, years? This is the time to do it. Resolve now to organize your closet, clean out your garage, write the first chapter of your memoir, learn a few chords on the guitar, etc. This will leave you feeling as though you put the downtime allowed by your uncharacteristically quiet social calendar to good use.

If you've ever tried to spend any amount of time sober, you've likely been subjected to the strange phenomena that is the irrational anger of your former drinking buddies—people do not like other people to be sober. This pestering can be incredibly annoying, so we suggest you simply keep quiet about your sobriety efforts. If you do find yourself in a drinking situation, order a sparking water with elderflower in it—no one will know it's not a vodka cocktail, and it tastes vaguely alcoholic, too.

Alcohol Concern has an app that tracks your days sober and tells you how much money you’ve saved by abstaining. We suggest approximating how much you'll squirrel away overall and then promising yourself something with that newfound cash (like a new pair of jeans or one night at a hotel somewhere fabulous). Any time you break sobriety, subtract what you spent on drinks from your total windfall, theoretically making your end-of-sobriety prize smaller with each failure to stay dry.

If you're one of those people who can just sip a glass of wine with dinner and be done with it, you probably don't need to torture yourself with a month of utter sobriety. In fact, trying to put limits on your drinking if you're already quite good at moderating can have the opposite effect, causing you to rebel and drink more than you normally would, or rebound in February by binge drinking. If you're a bit of problem drinker, however, sober January can be critical in helping you to reset unhealthy patterns—one study showed that 72% of people who practiced being booze-free for the month drank less than usual in the six months afterward.