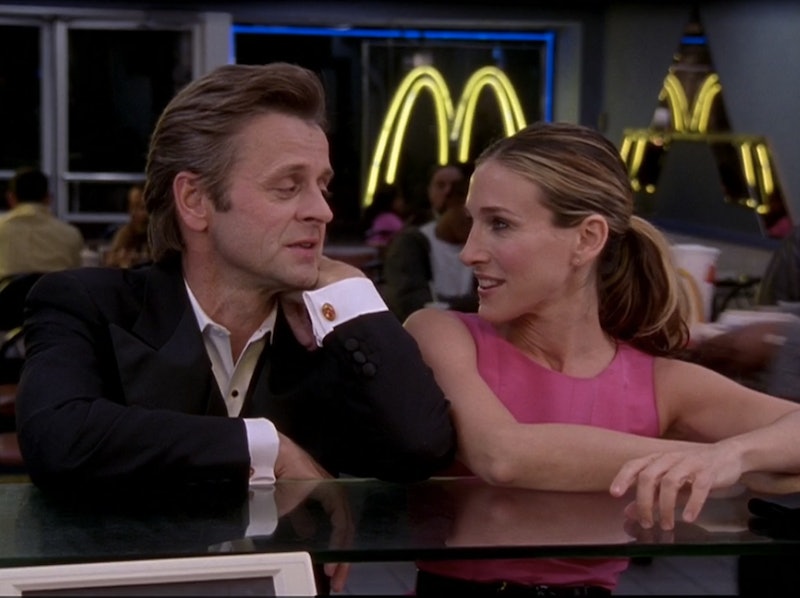 One of the most cringe-inducing situations Carrie Bradshaw ever got herself into (and there were a lot) was when she agreed to teach a Learning Annex class on how to find a mate. When she arrived to give the lovely speech she’d penned, she realized that, as a woman who’d dated an old high-school boyfriend now under psychiatric care, a guy who shoved stolen books down his pants and other assorted freak shows, she actually had no idea where one is supposed to look for love. Sure, a lot has changed since that episode first aired nearly 20 years ago—namely, the world of Internet dating—but we couldn’t help but wonder…are there any IRL ways to meet men in 2017?

We spend more time on the job than we do anywhere else, so it makes sense that love would bloom there. Before you get serious with someone at the office—especially if you report to them or they report to you—be sure to discuss it with your HR department to clarify any potential repercussions. (Cringe.)

According to the Washington Post , this is the most prevalent way in which people meet their partners. We find it happens most often organically—at a party for instance, rather than as a setup—but it never hurts to ask your friends if they can think of any worthy singles in their circles.

According to a survey by Mic, 40% of those interviewed said they'd been platonic friends with their mates before things got romantic. These have always been our favorite relationships, because there are no masks, so if the person likes you, they like the real you. If you're single, it's worth exploring your inner circle for options you may be overlooking.

You may like a bad boy, but he's not going to feed your as-of-yet-unborn children in the middle of the night. You know who will? The guy you meet volunteering at the animal shelter or the soup kitchen or the protest. According to eHarmony, common values and preferences for how you spend your time are crucial elements to a relationship's success.

It's unlikely you'll meet your mate at a bar these days, when one can save himself the trouble of small talk by going home and swiping right instead. Small soirees, however, are a different story. There's less of a meet-market vibe to striking up a convo with someone in a sophisticated setting.

We live in LA and we swear, this is the place to meet people. Choose your market according to your personal preferences—do you like a Whole Foods type or are you more of a Trader Joe's kind of girl? Scope the scene at several, as some neighborhoods are better for partner-hunting than others. The only downside to this approach is having to buy the food your ideal self would eat (in case the cute boy ends up in the checkout line behind you) rather than what you really want (mac and cheese). Consider it a diet and dating technique in one?

For whatever reason, it's so much easier to meet a mate on vacation than it is in real life. This can later present all kinds of challenges, but that doesn't mean it's not worth it. We find the method works best when traveling with a gaggle of girls, so start planning your itinerary ASAP.