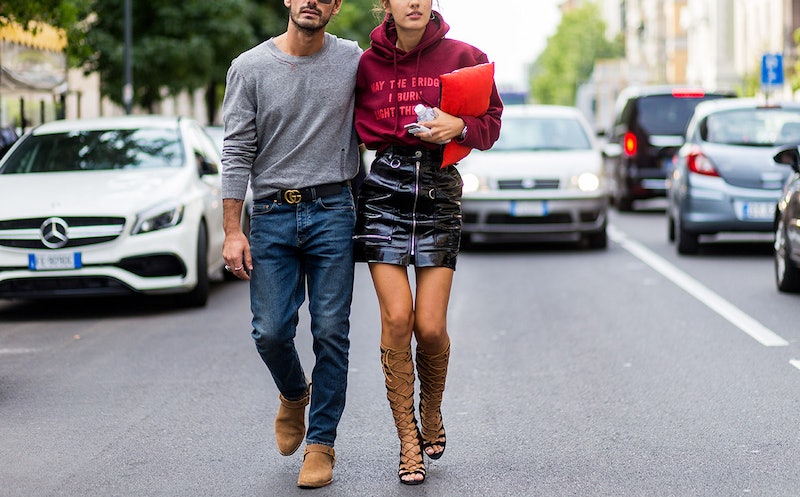 Disclaimer: I know that you are probably thinking I’m crazy, or desperate, or possibly some combination of the two. I can assure you that while I may be the former (all the best people are?), I am definitely not the latter. Though I am well into my 30s, I feel no rush to “settle down." However, I do love love—who doesn’t?—and am forever chasing its high. So, when I felt a serious spark with someone, which rarely happens for me, and he just so happened to live nearly 6,000 miles away, I couldn’t help but pursue it like a schoolgirl of 13, just in case. Here’s what happened when I did.

After ending an incredibly unhealthy on-and-off relationship with someone toxic back in January, I know I need to put myself back “out there,” but I've been putting it off for months. “Next week I’ll join Raya and Bumble and all the rest of the apps,” I keep saying, happily watching Netflix instead of scrolling through potential matches. Then, one day (while watching Netflix, of course), I lazily create a Raya profile. Before I know it, I’m matching with hundreds of guys and wondering why I haven’t done this sooner.

Elation, however, soon turns to despair, as I realize that finding chemistry online is harder than it seems, despite “connections” numbering far higher than anything you could experience via old-fashioned dating. “Hi,” are standard messages I receive, to which I reply, “hi,” at which point the conversation dies. This isn’t true for every man I encounter, of course, and I do end up setting dates with a fair number of my matches. Still, all Raya has me feeling so far, once the initial ego boost of matching with a million semi-famous musicians subsides, is that I miss my terrible ex. Not great.

Then, one day, I start messaging with Henry,* who is my version of a dreamboat—heavily tattooed, doting single dad and, of course, musician. Had I run this match by any of my friends, they would have immediately vetoed it based on the fact that this man definitely fits a (not-so-great) pattern of mine. To avoid this negative feedback, I stay mum as Henry and I start obsessively messaging each other. After just a few hours, I’m smitten, and before I know it we’re writing to each other all day, every day, as well as speaking on the phone a bit. (He’d like to FaceTime, but something about video-chat makes me look like Gollum, so I decline and defer.)

*name has been changed for anonymity

At some point early on—because I am a little bit crazy, remember?—I mention that I’ve got upcoming plans to visit London, where Henry lives. This isn’t an outright lie, as another ex/good friend of mine has been messaging me monthly to come out and see him. Still, it’s not as though I have tickets booked or anything. As I become more infatuated with this person I’ve never met, however, I decide, “YOLO,” and make the trip happen. One cheap plane ticket later, and I'm officially booked to London.

Henry thinks I have plans outside of meeting him while I'm in his hometown. I do not, as I decide I can’t tell my ex I’m visiting in case I want to spend the whole trip with Henry, and that I’ll instead message him upon my arrival if Henry turns out to be a dud. (Don't tell my ex.) I have a few other friends in London, but since I'm also happy as a clam walking around foreign cities solo, I have no fear regarding this venture, only excitement, which mounts the more and more Henry and I talk.

When the day of the trip arrives, however, I start to panic, not least of all because my other Brit, let’s call him James,* writes to let me know he’s just arrived in Los Angeles and would like to see me. Just like that, my back-up plan vanishes, and now all of my eggs are in the basket of a complete stranger. I waiver in my confidence regarding the trip, and message Henry to know I’m starting to feel crazy for coming to see him. He tells me to just get on the plane, and so I do.

*name has been changed for anonymity

Seemingly hundreds of hours later, I find myself sitting in a quiet bar adjacent to the Town Hall Hotel, where I'm staying, waiting to meet him. I’ve not felt this level of excitement over a boy in years—so much build-up, and so many butterflies. When he walks in, I am not disappointed. On my end, the chemistry is there. We’re both much more shy than we were online, but a few cocktails help us out, and before I know it, we are engaging in more PDA than emotions-adverse England has ever seen before.

The rest of the weekend—yes, I only went for two days—feels like a great first date: at points awkward, but mostly exciting. We get along quite well for complete strangers, and the whole trip has an ease to it that I hadn’t expected. I am smitten, but not in an over-the-top kind of way. I like Henry, and I feel that he likes me, but it’s not love at first sight. Instead, it’s something more… natural.

As I leave to fly back to Los Angeles, I will admit to feeling a bit bummed. Neither of us have lives conducive to traveling back and forth between continents with any regularly, so I know there is no future with Henry. I wonder if we would date if we lived in the same city—I think so, but that doesn’t mean I think we would end up together. It’s an unprecedented situation for me in my dating life—I really like this guy, but I’m not swept away by fantasies involving him. I would like to see him again, but I know it’s not really practical to put any energy into doing so. It’s contradictory and a bit melancholy, what I'm feeling, hard for even this writer to articulate.

When I return to America, things are different between me and Henry. The infatuation has dissipated. I try to keep it going because it felt as addictive as a drug, but I know and he knows there is no point, and that we’d be better off each trying to meet someone local with whom to become obsessed. Our conversations taper off, and I start trying to find the spark with someone new.

So, do I regret doing this monumentally crazy thing, flying all the way to London to go on a first date? Despite the outcome, I do not. To begin with, it was really fun and also gave me a great story to add to my arsenal of stories that fall in the category: “things I did that other people would not do.” Also, I really like Henry—we still chat here and there—and I hope we remain friends. As the cliche goes, life is short, and your single, childless years are the ones in which to experiment wildly. One day, when I’m old (e.g. next year), I will think about that first night, in the bar in London, when Henry walked in and my whole body flushed with butterflies. There will be other experiences moving forward in my life that provide a different kind of rush, but this particular one is unique even among my varied romantic entanglements. I now swipe left, or “no," on guys who don’t live in Los Angeles, but that doesn’t mean I wouldn’t, should the opportunity present itself, do the whole thing over again. It was, as Henry would say, "absolutely mental," but in all the best ways.