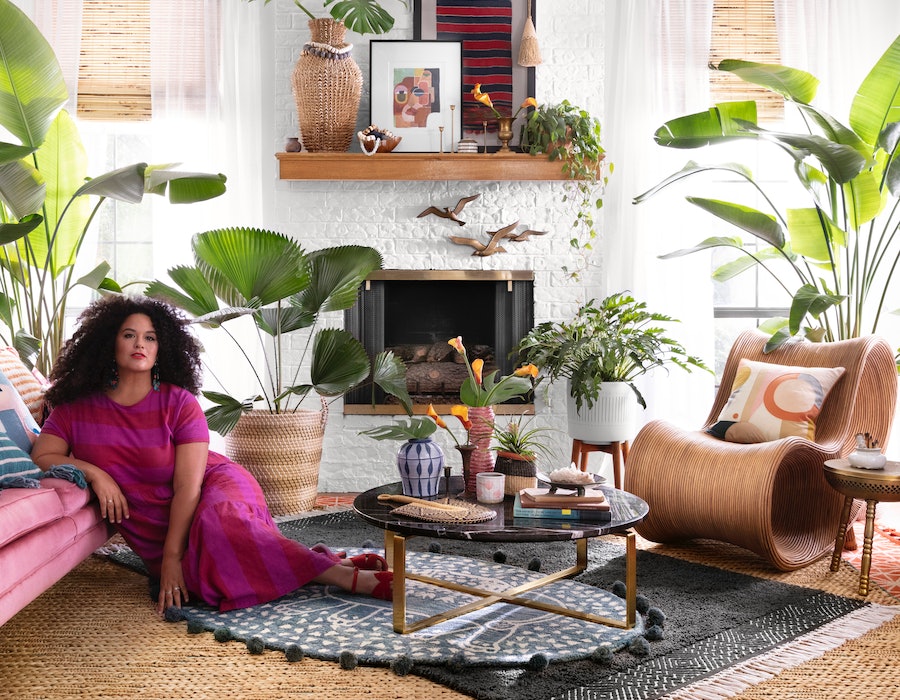 At this point, using the term "multi-hyphenate" has become somewhat trite — but then, that's the only real way to sum up Jungalow founder Justina Blakeney's professional title succinctly. On top of running a wildly popular home decor brand, Blakeney is the author of The New Bohemians book series (and the forthcoming Jungalow: Decorate Wild), a Target Home Style Expert, a designer, an artist, a speaker, and a mother. So yeah, multi-hyphenate is appropriate in Blakeney's case.

Yet the entrepreneur didn't exactly have all this planned from the beginning. Rather, as she tells TZR over the phone, she's a real sort of "follow-your-heart person." As it so happens, her heart was most interested in art when she started college. "What drew me to a creative field was just how good I felt when I was engaging with art," she says. "I had no idea what I wanted to do, but I knew that I loved art, and I wanted to lean into something I was passionate about."

Her studies in World Arts and Cultures at UCLA led to a multitude of jobs in the years following her graduation, many of them pointing to her entrepreneurial talent and penchant for balancing multiple opportunities at once. Eventually, though, Blakeney stumbled upon the profession for which many longtime fans know her best, and that ultimately led her to where she is today — blogging.

"I started my blog in 2009, and really at that time I was just sort of a creative person for hire; I was doing a lot of consulting and graphic design and branding work for mostly small, female-owned businesses," she says. "In the beginning, the blog was really just a way for me to chronicle my creative adventures."

As you're probably aware, the Jungalow blog grew into much more than that — though that wasn't really something Blakeney expected, or even planned. "I think somewhere in the back of my mind, I was like, 'It would be amazing if this blog grew into something more,' but I never anticipated that or had any kind of business plan. I just wanted to try it out."

While Blakeney used the platform to delve into a large range of topics including fashion, nature photography, and DIY projects, it was the content around interiors and her first apartment she was sharing that really caught the audience's attention. After three or four years, she says, she started to get inquiries about interior design. "So I just sort of seized the opportunity, like I did with all the other stuff leading up to that point," she explains. Thus, her foray into interior design began.

Though Blakeney makes it sound easy, it wasn't just pure luck that kickstarted the next step in her circuitous journey. "When I started blogging, minimalism was at its peak, or at least approaching it," she says. "I remember a lot of the big Instagram accounts for interiors at the time were like all-white-everything." With her colorful designs, abundance of plants, and bohemian aesthetic that's since become Jungalow's signature look, she stood out. "I think there were a lot of people out there who had similar styles to me, and were really hungry to see something that was more reflective of their personal style."

It wasn't just her style that propelled her career forward, though. Blakeney was at the forefront of another movement: the democratization of information. "Right before things like Instagram became popular for designers, there was a lot of proprietary content," she explains. "I think because I didn't start my career as a traditional interior designer, I loved being in conversation with my audience and sharing resources. People started coming to the blog because I was sharing stuff that other designers were keeping to themselves, and that was an important lesson to me — being generous with your audience can pay you back in other ways."

Of course, with such a dedicated following, other opportunities started to come as well. Blakeney says she got to a point where she had several licensed collections she'd designed, with products like rugs, pillows, and wallpaper produced by manufacturers around the world. Yet one day, after finalizing a furniture line she'd been working on for years, she realized with her business partner that there wasn't a retailer that felt "right" to carry the new collection they'd poured so much into.

"There wasn't anybody who we thought could actually bring what we wanted them to, which was a new, bigger audience than we had, and sort of the right feel," she shares. "And also, a place that had a bit of a conscience. Nobody was filling that niche." That, coupled with the realization that retail margins were much bigger than royalties, was the impetus Blakeney needed to finally give Jungalow its own e-commerce platform in 2017. "It was a moment where I was like, I'm an idiot if I don't open up my own online store."

As with many of her big, life-changing decisions, Blakeney says when it came to starting the Jungalow store, "I just sort of weighed it until I almost had no choice." But that's not to downplay the challenges she's overcome in starting it, as well as throughout her entire career.

With such an untraditional path, she explains that she's experienced her share of imposter syndrome. "I don't think that's ever possible to totally shed, at least for me," she says. "But even though I have those feelings, I don't let that inhibit my performance. I'm a real fan of fake it 'til you make it. It's important to focus in on your own strengths and to work those muscles that you are insecure about in order to get better. Or, just own the fact that that's not something that you do. And celebrate stuff that you do well."

In particular, being a woman of color in a world of business that's notorious for its lack of inclusivity and equality has presented its own set of hurdles as well. "There are so many remarks I've received over the years, like people assume that I'm not the one running the company," she says. "There's a lot of that kind of stuff behind the scenes. There are times when I'm like, Am I being treated this way because I'm a woman, or because I'm Black? I never really know how to account for it when I'm not being treated with the kind of respect I give. But I definitely feel it."

Blakeney also notes that there are many gendered ways of teaching and doing things that are so ubiquitous, they often aren't noticed — but they're felt nonetheless. "For example, I didn't grow up being talked to in a serious way about money in general," she says. "Just like I wasn't talked to about what to do if my car breaks down. But I do feel like my brother was taught a lot of that. And these ingrained ways of doing things and teaching make it a lot harder for everybody, especially women entrepreneurs, to succeed. I know that that's true for me."

For Blakeney, one of the things that keeps her uplifted through it all is collaborating with other female entrepreneurs. "I have an incredible community now of entrepreneurial women; they can count on me to help with stuff and I can count on them, and we kind of rise together. That's been really invaluable to me."

That's part of what's helped her build Jungalow into what it is today, which she says is currently in a "really exciting place." The shop has now been open for more than three years, and Blakeney tells me the brand has a big audience and an engaged community that loves the products. "For the first time I'm at this place in my life where I'm like, 'Where do you want to go? You can go anywhere,'" she shares.

As for "where" she'll choose next? "We're really focused on our sustainability goals, our give-back goals, and for me personally, working with women and especially women of color who are up-and-coming, and mentoring and trying to give back," she explains. You can also expect some partnerships that are going to "blow everybody's socks off" and — "god willing," she says — "hopefully there will be a Jungalow place you can stay [in]" by 2022. In other words, as Blakeney says, the world's about to get a lot more "jungalicious."