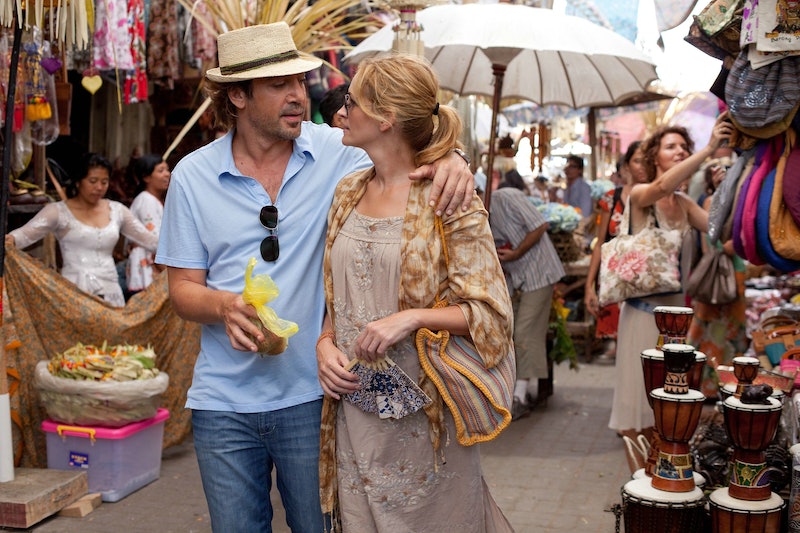 It's been a year and a half since most of the country went into lockdown mode and foreseeable travel plans were put on hold. And as vaccine rollouts progress and people start picking up their post-COVID routines, taking off is once again an option. Yes, at this point in the game, it's natural for a need for adventure that extends past your doorstep to kick in loud and clear. The good thing is, you can still feed and inspire your next getaway with some top travel films featuring breathtaking views and worldly landscapes.

Now, to be clear, not all travel movies are created equal. Some are, in fact, travel-focused. Films like Eat Pray Love, Wild, and Under The Tuscan Sun are specifically about women braving uncharted territory and globetrotting as a means to better understand themselves. There are vacation-centric movies like Crazy Rich Asians and SATC 2 that place protagonists in stunning locales for a fun-filled purpose like the wedding of a boyfriend's childhood friend or a perk-filled business trip with your three BFFs.

Either way, these epic films and their equally epic backdrops have a way of teleporting viewers to foreign lands for two hours, sans passport and heavy luggage. They can also help inspire your itinerary for your next trip, if you’re ready to see the world again!

This 2020 film swept the Oscars for a reason. In addition to its stellar script, direction, and performance from Frances McDormand, it also features stunning views of United States national parks to inspire your next road trip.

This true story of a privileged post-grad who packs up his belongings and hits the road will make you want to immerse yourself in nature immediately.

The film that sparked a thousand French-girl bobs will also spark your next Parisian trip.

Inspired by director Sofia Coppola’s time in Tokyo, this award-winning film spotlight’s the exciting city in a stunning and interesting way.

If you’ve been contemplating a trip to the South of France, this film will push you over the edge with it’s beautiful scenery and lighthearted storyline.

This throwback ‘90s movie captures the scenic perfection of Thailand and its pristine beaches. Oh, and the story is pretty engaging too!

Yes, the story of two men checking off their life bucket lists will warm your heart and inspire the heck out of you. But, it’s the views of India, France, China, and Egypt that will make you want to recreate the story yourself.

Liz Gilbert's quest for self-discovery spurred that of many with the 2006 memoir and subsequent 2010 movie, in which Julia Roberts starred. You can't help but want to drop what you're doing and catch the first plane to Bali.

Under The Tuscan Sun

Another memoir-turned-movie that launched a thousand Italian vacations was this one by Francis Mayes (who's played by Diane Lane in the 2003 film). The Tuscan countryside and authentic streets of Rome are a visual feast for the eyes.

Those with a love for the great outdoors (read: camping), will love this free-spirited tail of a woman on a journey of self-discovery and healing. Starring some major A-listers like Reese Witherspoon and Laura Dern, you can't go wrong with this talented cast or stunning scenic route through California's southern desert region and northern mountain ranges.

Filmed mainly in Kenya in the beautiful Ngong Hills, you don't get much more picturesque than this 1985 film, starring Meryl Streep and Robert Redford — and the fateful love story isn't too shabby either.

A Walk In The Clouds

Vino lovers will love this visual masterpiece set at a Napa Valley vineyard. Keanu Reeves plays faux fiancée to Aitana Sánchez-Gijón, who returns home to her traditional Mexican-American family pregnant. The unexpected love story is almost as touching as the locale.

What's better than your four favorite SATC ladies on an opulent and majestic Abu Dhabi vacation? Nothing.

Stunning scenic views of Southeast Asia Singapore, a perfect makeover montage, and an amazing cast — what's not to love about this movie?

If you want a tour of the Australian desert, this film is for you. It chronicles the journey of Robyn Davidson's nine-month journey by camel across the vast country.

If you want to spend a night in Vienna, this movie (featuring a young Ethan Hawke and Julie Delpy) will tide you over until you can be there in person.

Audrey Hepburn's rebellious romp around Rome is the stuff of vintage dreams.

This early account of a 23-year-old Ernesto Guevara (who would later become known as the iconic revolutionary Che Guevara), takes viewers on a stunning motorcycle road trip across South America.

A husband who has passed away sends his grieving widow on a tour of Ireland, making for a tearful and visually stimulating two hours.

This article was originally published on 5.1.2020