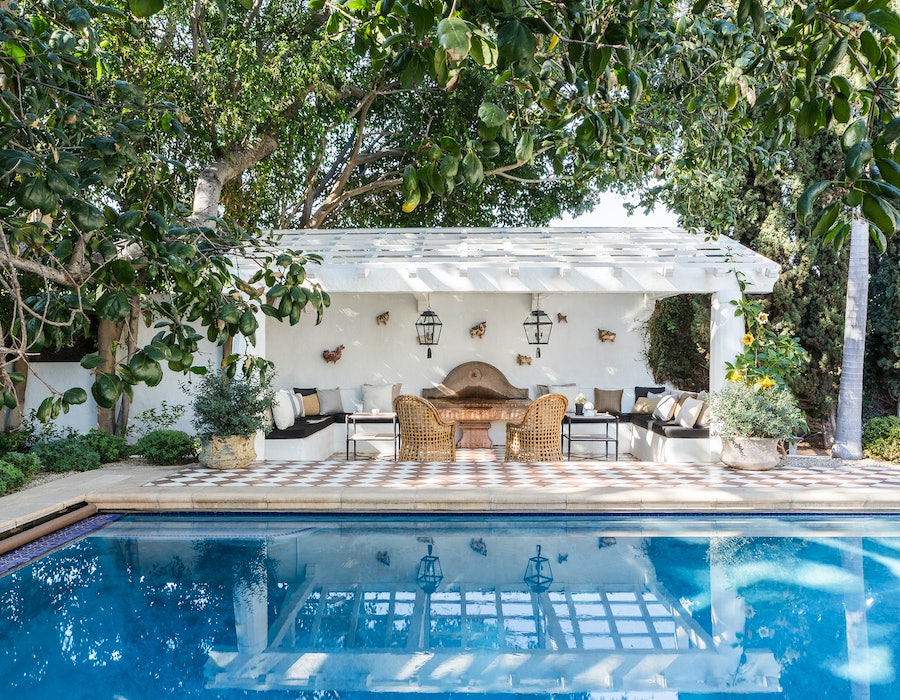 According to the crowd-sourced review app Yelp, 2020 was all about the home: Mentions of interior designers increased 372 percent on the platform thanks to the surge of people cooking, decluttering, and renovating while stuck inside. In 2021, though, things changed. Rather than only focusing on the inside, the backyard became the place to be. Searches for related terms exploded — “outdoor deck” jumped to 373 percent, “patio heaters” saw a 263 percent increase, and “outdoor lighting” went up 88 percent. With so much excitement around the space, Yelp decided to take a look at which backyard trends are dominating 2021. So with the help of interior designer and star of HGTV’s Rock the Block, Jeremiah Brent, the brand put together a report laying out which ones to keep on your radar this summer and beyond.

To do that, Yelp’s data science team examined the words in searches and review mentions to identify which terms had the biggest increase in 2021 compared to last year. On top of that, the brand looked at trends on the rise from the past several months. To finalize the list, Brent weighed in with his expertise to help curate the trends.

“To put it simply: we’ve never been more ready for summer,” said Brent in a statement. “Over this past year, our outdoor spaces have truly become our haven. Through a little bit of intentionality and connections to the right resources, there are so many beautiful ways to transform your backyard into a timeless escape for your family.” Ahead, see the full list of some of the most popular ways to do that this year, according to Yelp.

Yes, people are returning to restaurants — but as Yelp reports, they’re looking to upgrade their at-home dining experience with nearly equal fervor. According to the brand, searches for outdoor pizza ovens increased 193 percent in March 2021, compared to the same time last year, while searches for outdoor lighting upgrades were up 88 percent during the same time period.

“The charm of bistro lighting, outdoor table linens, and umbrellas have brought such an elegant feel to al fresco dining — and those simple touches can be used to create the same ambiance in your own backyard, whether it’s for a small family gathering or a larger celebration,” said Brent in the report.

“I’m a huge advocate of bringing the outdoors in and the indoors out,” said Brent — and apparently, so is everyone else. Searches for fire tables have increased 76 percent in the last year, while searches for patio heaters increased 263 percent in the same time period, proving that the desire to make the outdoors as cozy and liveable as the indoors is stronger than ever.

Not only was there massive jump in searches for outdoor decks (up 373 percent this year, in case you forgot), searches actually increased 64 percent between February and March alone. In fact, deck and patio additions are so popular (and seemingly irresistible), Brent added one to his own space. “When we were filming Rock the Block in Georgia last summer, we created a screened-in porch (Yelp recently saw a 236 percent increase in searches for “screened porch”) and ended up loving it so much we decided to add one to our home in Montauk. Summer living without the bugs.”

Though Yelp’s report says “searches for pool installation were up 449 percent in March 2021 from March 2020 and up 680 percent from the same month in 2019,” you don’t have to go that big to get water’s soothing effects. Many people have opted for the less permanent (but still wildly popular) tank pool, while Brent himself loves to simply add an antique fountain.

“This year, I’m seeing a shift from tightly packed planted flowers to landscaping that looks more organic, like wild hydrangeas and lavender,” says Brent. According to Yelp’s data, that tracks. Greenhouses, planter beds, and drip irrigation systems have all seen an increase in searches on the platform, pointing to the fact that people want simplicity and ease in their gardening forays.

These days, it’s all about the private retreat. Searches for hedges have drastically increased on Yelp (317 percent in March) as a way to provide solitude, and Brent turned a backyard shed at his Montauk home into a guest house.

Yelp has not only seen an increased demand for antique furniture; the brand is also tracking increased popularity in landscaping solutions like artificial turf that don’t require lots of maintenance or water.