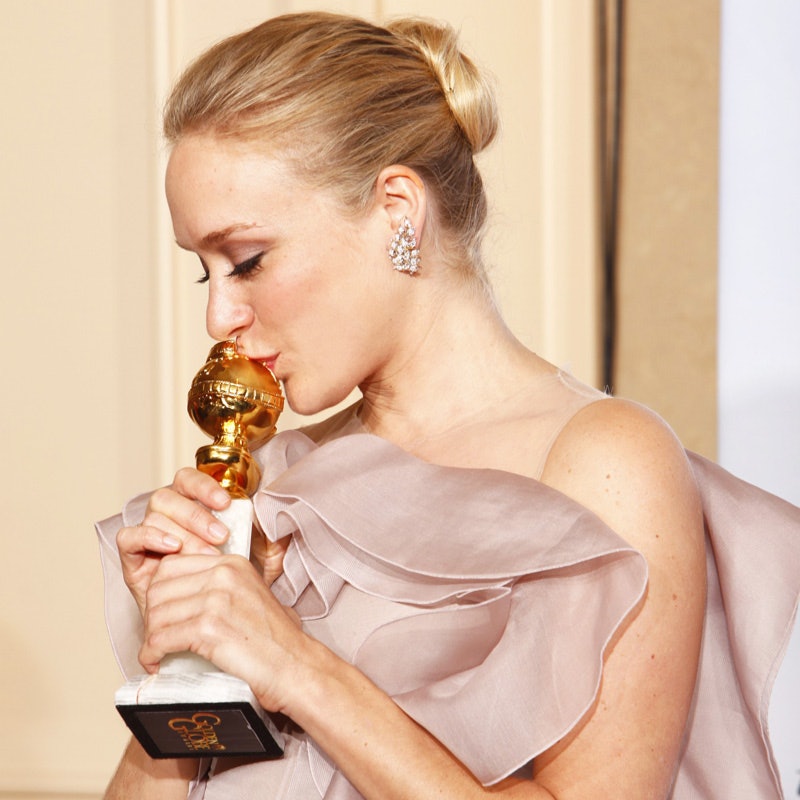 Pinch us! The 72nd Annual Golden Globe Awards are happening this Sunday (January 11th at 8PM ET on NBC), which will launch us strong out the gate into red-carpet season. In addition to making glamorous wardrobe predictions, we’ve been busy brushing up on our knowledge of the longstanding ceremony to enrich your commercial-break conversation. Soak up these facts and you’ll be sure to impress your viewing party guests!

Get To Know The Golden Globe Awards

The ceremony will be presented from the Beverly Hilton Hotel, where the Golden Globes have been held annually since 1961.

Hosts Tina Fey and Amy Poehler first met in 1993 during an improv class at Chicago's ImprovOlympic.

The Golden Globe statues, which feature 24-karat gold-plating, are stored in a manufacturer warehouse in Grove, Oklahoma until they are ready to be shipped to the Hollywood Foreign Press Association office. They are then transported to the Beverly Hilton Hotel on the day of the ceremony.

Gucci was the most worn designer at the 2014 Golden Globes. See our predictions for this year here.

The Golden Globe Awards began in 1944 but didn't have a host until 1958, when Rat Pack members Frank Sinatra, Dean Martin and Sammy Davis Jr. stormed the stage and took over unofficial hosting duties.

In 2008, the award show was not telecast live due to the Writers Guild of America strike.

Each year, Miss Golden Globe assists in handing out the awards on the big night. This year's lucky lady is up-and-comer Greer Grammer. Past recipients of the award include both Melanie Griffith (1975) and her daughter Dakota Johnson (2006).

In 1989, there was a three-way tie for Best Actress between Jodie Foster (The Accused), Shirley MacLaine (Madame Sousatzka) and Sigourney Weaver (Gorillas in the Mist).

9. The Most Embarrassing Moment

Both Renee Zellweger (2001) and Christina Lahti (1998) were pulled out of the ladies room when their name was called to accept an award.

Unlike the Oscars, which closes the bar down before the show starts, the Golden Globe Awards serve a steady stream of sips for attendees all night long. Cheers!