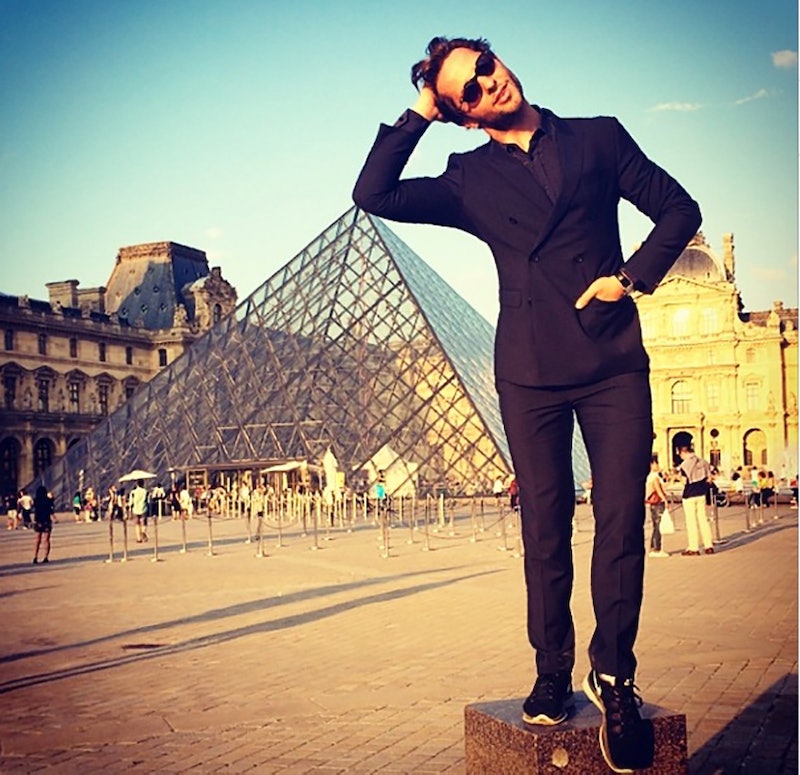 If anyone knows Paris and Haute Couture it’s Derek Blasberg, which is why we tapped him to cover this week’s shows and events for The Zoe Report. Despite his incredibly hectic schedule, we also got him to share his favorite spots and activities in the French capital, so think of this as The Only Guide You Need To Paris. Want more? Check out his antics as he takes over our Instagram for the day!

"I've always thought it was ironic that there is such good food in a city where style is so important. How do those Frenchies fit into their ensembles? I have two favorite meals in Paris: The crab salad at the Hotel Costes for lunch (my tip? Add avocado) and the caviar potato at Caviar Kaspia. But, be warned: in the case of the latter, it's possibly the most expensive baked potato in the world."

Get Your Art On!

"Yes, I know the Mona Lisa is at the Louvre. But there are all manners of inspired art work in Paris. The Grand Palais features some truly inspiring exhibitions and there are two Gagosian spaces in Paris: A traditional gallery on the rue de Ponthieu; and Le Bourget, a large, fabulous space just outside the city, which currently has 'An American in Paris' up. My favorite Jeff Koons piece, his Balloon Swan (Red) is there!"

"Even in the summer, I will come to Cafe Flore and have the hot chocolate. It's decadent and rich, and so thick it's served with a glass of water to cleanse the palette after indulging."

Dance It Off At La Montana

"Down the road from Cafe Flore is a small, sweaty disco called La Montana. To be honest, I have no idea why I go there every season -- the dancefloor in the basement is so tiny you literally end up on top of each other (or maybe that's the point?) and I tell myself it's great way to dance off the calories from the aforementioned hot chocolate."

"This is the most elegant taxidermy shop in the world, with an eclectic range of beautiful creatures. It's like a zoo for the imagination, and these perfectly preserved animals are a glorious tribute to the beauty of nature. (And of course all of the animals are ethically sourced and accounted for with government documents!)"

"It's not just the girls who are spoiled for shopping options in the French capital. The Charvet shop spoils men with choices, and they do the most exquisite mens shirts. They also do fabulous PJ's, which girls can wear too."

An Homage to the King of Paris

"I've been lucky enough to have had private audiences with Karl Lagerfeld. But if he's busy designing one of the 12 collections a year he does, you can always pop into a Chanel, Fendi or Lagerfeld shop. The Lagerfeld shop in St. Germain has fabulous dressing rooms that are equipped with iPads to see how you look in a selfie."

Relax In The Tuileries

"I always try and stay a few days after fashion week in Paris to do my favorite thing: nothing. Sit in the Tuileries and watch the days go by. Grab a baguette and eat in the little park on the tip of the Pont Neuf. I'm at an age where a lot of my friends have children here, so another fun thing to do is go to the playground in the Luxembourg Gardens."